The first era of overcrowding, (called the old overcrowding), led to conflicts and also riots.

Don't use plagiarized sources. Get your custom essay on
“ Overcrowding and Mass Incarceration: The Big Issue ”
Get custom paper
NEW! smart matching with writer

It created issues for prisoners and correctional staff alike. Both state prison and federal prisons were both reported operating above their rated capacities (Steiner, 2018). This makes it more difficult for corrections staff to do their job and more difficult for prisoners to be civil. It creates unneeded tension. The effect creates more assaults on staff and a greater staff turnover rate. Some studies correlate overcrowding and increased prisoner stress, anxiety, and tension. The higher number of prisoners also places a burden on prison healthcare, counseling, and sanitation.

The more people the fewer resources readily available (Steiner, 2018). Overcrowding in these times came from antiquated prisons and the reluctance to pay for new modern facilities that would better fit the dominant rehabilitative objectives. Ironically, the biggest effect of prison overcrowding is cost. Although overcrowding is an issue, states have created effective tools to deal with it.

The creation of parole laws that allowed centralized administrative boards to control the pace of prison releases was a major benefit to reducing overcrowding (Simon, 2016a).

Before mass incarceration was even an issue, prisoner advocates sought to build on progressive penological ideas. One of the ideas was the standards for housing prisoners. This focused on one person to each prison cell, no more double-bunking. This idea was thought to maybe compel states to reduce their reliance on incarceration. The goal ultimately failed, and states began to adopt tough new sentencing laws that increased imprisonment and brought around the ‘new overcrowding’. These new sentencing laws were part of the “tough-on-crime” movement. They created longer sentences for all major crimes such as murder, rape, drug law violations, and burglary (Steiner, 2018).

Mass incarceration has created the new overcrowding. “The new overcrowding is far more severe and enduring than past issues. “The new overcrowding plays out in a context where prisoners serve much longer sentences, have less access to rehabilitative programs, and have greater unmet needs for medical and mental health treatment” (Simon, 2016a). This new overcrowding has led to inhumane treatments and sometimes malicious behavior directed towards prisoners by both equals and staff members. “Overcrowding has been examined in the courts as a challenge to the Eighth Amendment’s cruel and unusual punishment clause, due to the argument that the conditions violate prisoner’s rights” (Steiner, 2018). In most cases the courts have held that the total condition of an institution must be examined before collective effects of overcrowding on inmates can be understood (Steiner, 2018). Many states have gone as far as to eliminated parole mechanisms for most prisoners. The new overcrowding has rendered past precedents out of date and invalid. The Supreme court and lower courts are becoming more aware of the magnitude of the problem and have begun to test the applicability of a strengthened overcrowding norm that is more appropriate to the age of mass incarceration (Simon, 2016a).

It is with little surprise that America’s practice of mass incarceration has come under growing criticism. It is criticized as being fiscally unstainable and morally indefensible. The federal prison system and half of the state’s prisons have been affected by this problem or overcrowding that spawns from mass incarceration (Simon, 2016b). In 2015 the U.S Justice Department decided to release thirteen-thousand inmates from federal prison (Pinto, 2015). These inmates were being released before their whole sentence had been served. President Obama showed hopes of another reform in 2016 when he granted clemency to forty-six federal prisoners serving long drug sentences for non-violent conduct. Another reform is recent one-off sentencing reforms aimed at preventing imprisonment for minor drug or property crimes (Simon, 2016b). There is one method that would be undeniably beneficial in overcrowding. This method is a pardon form, generally known as amnesty. Amnesty has had a limited history in the United States but has been commonly used in European countries to reduce problems in prisons, like overcrowding. President Obama had begun to use this kind of approach to address the related problem of immigration and mass deportation in the United States.

The release of the thirteen-thousand inmates in 2015 was not credited to President Obama, nor Congress, it is credited to the United States Sentencing Commission. In 2014, the United States Sentencing Commission approved a reduction in sentences for certain drug crimes. Judge Patti B. Saris, the commission’s chair said, “The modest reduction in drug penalties is an important step towards reducing the problem of prison overcrowding at the federal level, reducing the federal prison population has become urgent” (Pinto, 2015). In July of 2015, the commission voted to make the reductions to sentencing eligible for people currently in prison as well. Prisoners who would under the current law have received a lower sentence were eligible to petition judges for early release. More than seventeen-thousand inmates submitted petitions (Pinto, 2015). The seemingly optimal method to deal with overcrowding is to release individuals that are serving long sentences for minor crimes. Releasing individuals in prison for jail offenses can significantly reduce prison overcrowding. It also has to be examined what people were put in prison for criminal behavior versus mental health needs, addiction needs, or socioeconomic needs. Individuals put into prison for anything other than just criminal behavior need assistance from other institutions that may not be a prison. When releasing people to reduce overcrowding public safety must be the number one concern.

Up until recent years Congress has not been interested in reforming the U.S prison system. With the second plague of overcrowding becoming prominent that spawned from mass incarceration, there is no way to ignore the issue. Many reforms have already taken place by President Obama and the U.S. Sentencing Commission but, meaningful federal-sentencing reform is needed to fully oust mass incarceration. The only way to get a federal-sentencing reform is with the okay from Congress. Without it, even though the other reforms are functional, mass incarceration will continue, and overcrowding will persist. 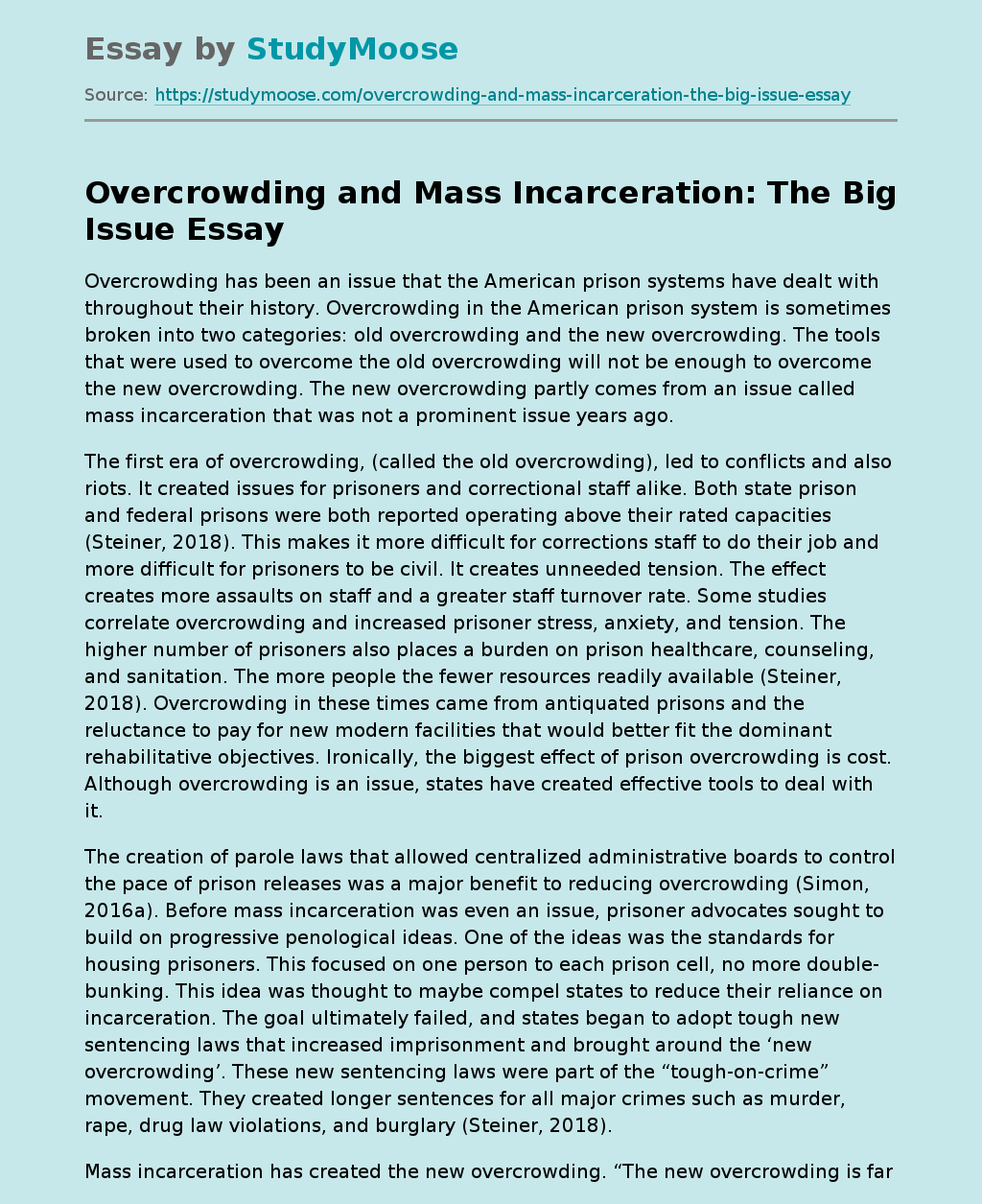