The Wages of Prison Overcrowding

Prison populations around the world have increased beyond measure and are troubling the criminal justice systems with massive financial and organizational burdens. The Criminal Justice System as a whole is coming to the realization that incarceration in its most regular sense has been far from being successful in achieving the envisioned social and sentencing goals it was intended for. Now the criminal justice system is looking into the effectiveness of many alternatives to incarceration programs, which offer many advantages in terms of cost reduction, social relevance, and the feasibility of meaningful and effective rehabilitation.

Don't use plagiarized sources. Get your custom essay on
“ The Wages of Prison Overcrowding ”
Get custom paper
NEW! smart matching with writer

The prison population in the United States has been growing rapidly for many years, with no indications of a decrease. Although there have been many attempts to reduce levels of imprisonment, this has been proven to be difficult, as there are fears of increasing crime levels as a consequence. The factors that drive this climb are varied, with some studies indicating that crime is a driver, while others suggest that harsh sentencing guidelines and laws are largely to blame for the rise.

Studies indicate that the prison population and rates of incarceration are not equal across the races, with racial minorities, particularly African Americans facing higher penalties, increased surveillance and scrutiny as well as a higher level of incarceration as a result of sentencing.

An alternative to incarceration programs offers a second chance to individuals who have been arrested and are facing sentencing, cannot afford bail, or have already been sentenced. In today’s society, alternative programs are very important for minorities and individuals with behavioral health issues.

Alternatives to incarceration are not focused solely to put an end to the problems of overcrowding in prison. Revisions on how crimes are being approached and handled are also primary concerns. Restorative justice and reintegration are major modification pit stops. Along with sufficient support to criminals and law violators, it opens the doors for these individuals to live a better life without the need of going back to their criminal lifestyle. This is a long-term benefit of a more secure society.

In many of the literature I have been reviewing, one of the main premises is the belief that the prison is not the best place to reform an individual for there is a tendency of re-offending after being released from confinement. An alternative to incarceration is it is a more humane option. Hopefully, some of these alternatives will spread to the courts which could then be used as part of the rehabilitation of the offender when sentenced, at the same time reducing the problem of the jails overpopulation.

Another important part of the alternative to incarceration sentencing option requires operational changes in prisons in order to make it effective and sustainable and address the prison overcrowding. With the increase in the number of criminals being incarcerated in jails, the maintenance, management, and administration of prisons have become increasingly difficult. Although prisons are deemed as places to rehabilitate the offender and to correct and deter delinquency, these penal institutions are doing the opposite: they are creating criminals incapable to fit in into society. Prison conditions, prison populations, and prison rates show the inability of these institutions which are unable to reform criminals.

The Wages of Prison Overcrowding. (2020, Nov 03). Retrieved from https://studymoose.com/the-wages-of-prison-overcrowding-essay 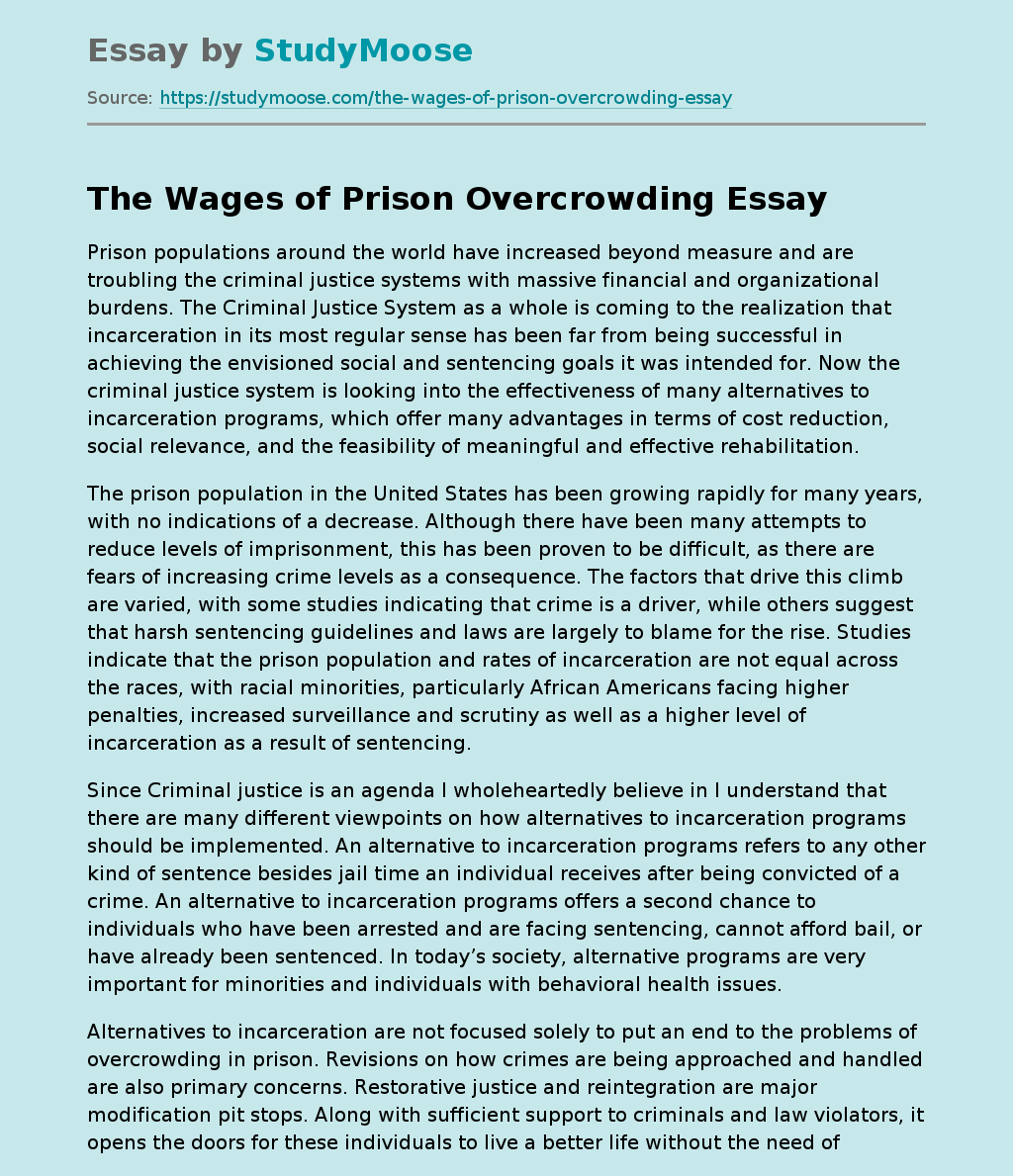