This research paper is to explore the impact of prison overcrowding. The United States has a, what seems to be everlasting, prison overcrowding problem. Not only does the United States have this dilemma, but also many other countries have overcrowded prisons as well. Many issues need to be addressed; ways to reduce the prison populations and how to effectively reduce prison cost without jeopardizing community safety are major issues that need attention. Successfully rehabilitating inmates can play an important role in the fight to Prison Overcrowding

There are overcrowded prisons all over the world.

Don't use plagiarized sources. Get your custom essay on
“ Prison Overcrowding ”
Get custom paper
NEW! smart matching with writer

In 2011, the United States federal prisons housed around 219,000 inmates. In 1980, the United States federal prison population was 25,000. A total of 1,598,780 adults were incarcerated in county jails and federal and state prisons at the end of 2011, according to Urban Institute. There are many issues that need to be revisited until there is a solution. A number of impacts are the product of the overcrowded prisons. Health, safety of inmates and correctional staff, as well as, economical problems all need some solution, and quickly.

Not only are prisons affected, communities are also directly and indirectly affected by prison overcrowding.

Even though the government can’t just start releasing prisoners that haven’t served their full sentences to reduce the populations, the cost of incarceration, the health and safety of inmates and staff, and the affect that overcrowding has on communities are all issues that cannot be put on a back burner. With United States prisons being filled 38 percent above their capacity, some issues are of greater importance than others when it comes to the overcrowding of prisons.

How to decrease prison populations is the main objective. California has started a program that has reduced prison populations significantly. Nonviolent, non-serious, non-sexual offenders are sentenced to local facilities like county jails instead of state prison. The Department of Corrections has programs that alternative to incarceration and are more cost effective that have been given more funding in recent years also. The cost of incarceration, and the effect it has on the economy, in the United States is a major issue. It is very costly to house inmates in prison every year.

An article in Impaired Driver Update. Show that it cost $27,000 to hold one inmate for a year, and that approximately $50 billion a year is spent on incarceration. It cost 20 times more to have an inmate incarceration than to have them on probation. Of $50 billion dollars spent on correction, $6.8 billion is spent on probation. An article published in Federal Probation in 2013 states, “recidivism rates average between 43 and 67 percent and supervision violators constitute on third of the persons admitted to state correctional facilities,” and “on, average, persons under supervision have five prior arrest; 16 percent violated a federal, state, or local community supervision, and 8 percent have a history of absconding.” Sentencing offenders to alternative programs would help cut cost and also help decrease prison overcrowding. Alternative programs for offenders in lieu of prison or inmate programs that help rehabilitate offenders and prepare them for re-entry could also help prison overcrowding.

If inmates are able to attend programs for drug treatment, social disorders, and dealing with issues like abuse as a child the prison population could decrease. Inmates that have successfully rehabilitated have contributed to society and thus show that more money towards rehabilitation instead of incarceration could have a positive impact on population and society. In 2012, supervisees paid around $645 million in restitution, fines, and assessments. They contributed $4 million in community service. If more inmates are successfully rehabilitated an estimation in the Federal Probation shows that a savings of around $115 million could be cut of the budget with supervisees contributing by paying taxes, supporting dependents rather than on welfare, satisfying ordered financial obligations, and performing community service. The probation system cannot solve the whole overcrowding problem but could help immensely.

Inmates that are released from prison that have no family, no real friends, no one to help them are really set up to fail off the top. They are given $200 and sent out to survive in what is one of the most expensive countries in the world. $200 now days will not even get you a hotel room for a week. So many of them revert to selling drugs, stealing, or worse to manage. If there were more programs to help find them housing, employment opportunities and teach them how to be productive members of society, maybe the prison population would continue to decrease. There are also many effects of prison overcrowding on inmates and correctional staff health as well as the effects on correctional staff safety. The Corrections Manager Report in Dec/Jan 2014 reports an incident of a BOP officer killed, “while working alone in a unit housing 130 inmates.” The Urban Institute also states, “health and safety hazards from over used toilets, showers, and food service equipment,” are some of the many issues that need to be addressed.

The Supreme Court ruled that California prisons were so bad they violated the 8th amendment and CDRC needed to reduce prison population by 30,000 inmates. Releasing inmates also has an effect on communities. When inmates are release it can affect their communities. If in the future there are more alternatives to incarceration to help reduce prison population people will be affected. Of course, not all inmates are going to follow their rehabilitation program and their offense will affect their community. They many rob, steal, or possibly assault someone in their community. They could begin to sale drugs that can also directly affect a community. There are positive ways though too that the community could be affected and the community could also positively affect the offender by participating or starting programs that help offenders start following a new path, and become successful members of society.

Some communities have started outreach programs that help offenders. By having alternative programs available to offenders, who meet certain criteria it will help with the prison overcrowding problem that much of the United States continues to have a serious problem with. Prison overcrowding is a serious problem all over the world. It has economic effects. Prison overcrowding also has health risk to inmates as well as correctional staff. Safety risk for both inmates and correctional staff pose a great problem to with prisons being overcrowded. There are both pros and cons when it comes to effects on communities with this issue. Although we can’t just start releasing inmates to solve prison overcrowding, we can start focusing on ways to solve this problem. Prison overcrowding is a very complicated issue and should be given great attention by Congress, the Board of Prisons, and the Department of Justice. 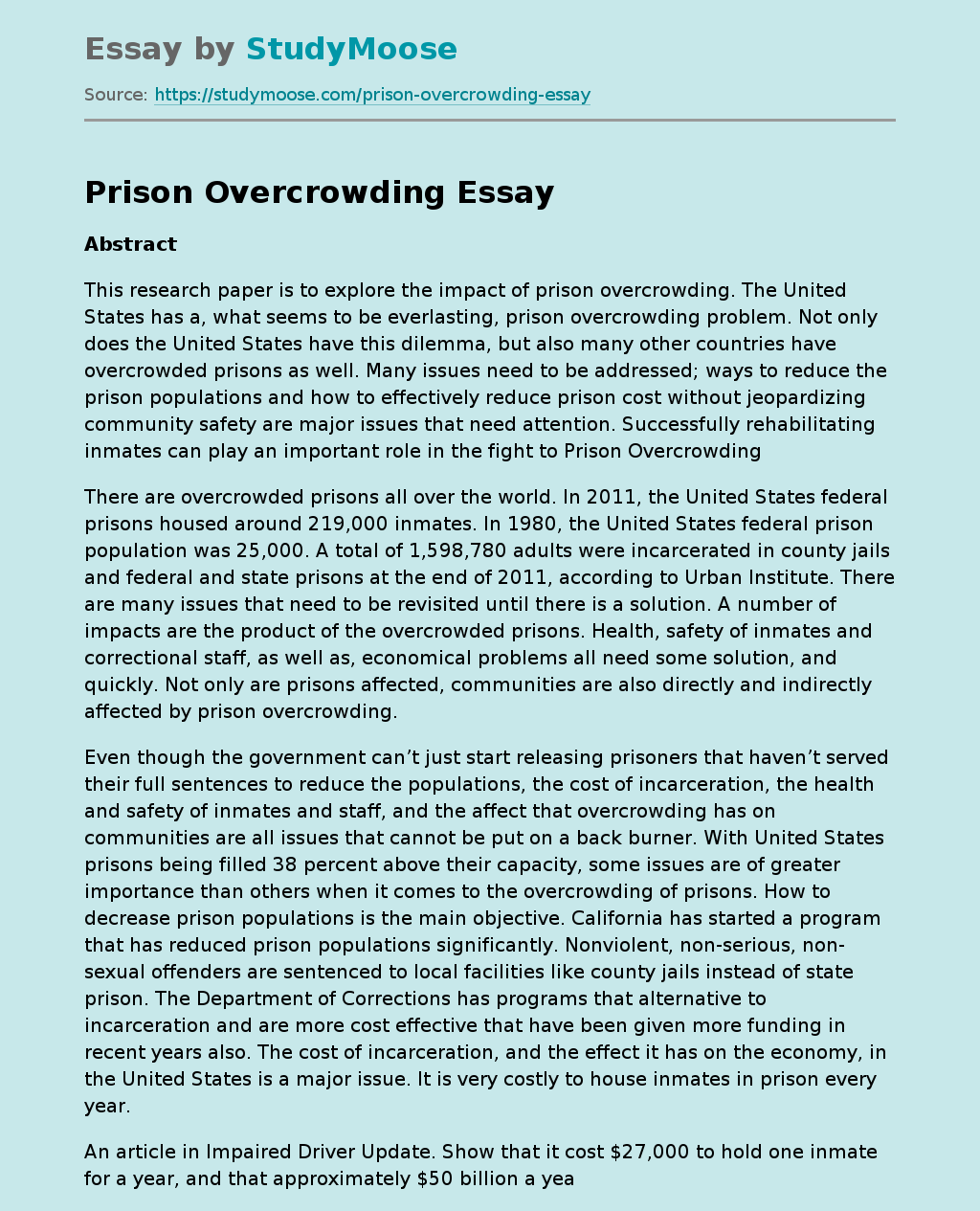