How Did Mass Media Influence Adolescents and Children in the Last Ten Years?

TV Media’s Influence on Child Development http://www. cleancutmedia. com/tv-shows/tv-medias-influence-on-child-development “Several risks to pediatric health are literally staring children in the face. It’s time to call the doctor. ” Want to share this old, but great article from the Harvard Medical Alumni Bulletin. Very interesting points about how media cuts into many issues such as obesity, eating disorders, attention disorders, violence, sex, and drug use and how Medical Professionals need to deeply consider how much media has an influence on the development of these.

Don't use plagiarized sources. Get your custom essay on
“ How Did Mass Media Influence Adolescents and Children in the Last Ten Years? ”
Get custom paper
NEW! smart matching with writer

As this fairly long article is well written, I will simply excerpt huge chunks of it. I’ve copied out significant paragraphs and bolded the main points. Hope it is helpful. Full Article Here. The most important thing we’ve learned, So far as children are concerned, Is never, never, never let Them near your television set… They sit and stare and stare and sit Until they’re hypnotized by it… Did you ever wonder exactly what This does to your beloved tot? His brain becomes as soft as cheese His powers of thinking rust and freeze He cannot think—he only sees! the Oompa-Loompas in Charlie and the Chocolate Factory TV Media on Child Development The Oompa-Loompas’ cautionary song about the hypnotic effects of television on children may have seemed alarmist in 1964 when Charlie and the Chocolate Factory was first published, but now its lyrics seem almost understated.

In Roald Dahl’s story, television addict Mike Teavee pays for his obsession by getting shrunk to the size of an actor on a television screen.

Dahl exaggerates the effects of excessive viewing, but for children glued to media screens today, the consequences may be more insidious and just as hazardous.

Decades of research have established that television and other screen media—movies, the Internet, and video games—constitute a powerful environmental influence on children’s health and development, according to the Center on Media and Child Health at Children’s Hospital Boston. American children aged 8 to 18 spend an average of 6 hours and 21 minutes daily using media—more time than they spend in school or with their parents. And the risks of so much time spent in thrall to their screens are serious. More than 2,200 studies have linked media use and aggressive behavior.

By age 18, a child will, on average, have witnessed 200,000 acts of violence, including 18,000 murders. Children’s programs—shows that one would expect to be free of violence—average 14 violent acts per hour, 8 more than adult programs. For adolescents, the influence of violence in media may even prove fatal: the top three causes of death among 15- to 19-year-olds all involve accidental or intended violence. Media’s Influence on the Mind Like the Oompa-Loompas, Michael Rich ’91 understands the powerful clutch media can have on the mind, especially the mind of a child.

So well has research documented the connection between watching violence on television and aggressive behavior, he says, that the correlation is “stronger than those linking calcium with bone density and passive smoke with lung cancer. ” Rich, a pediatrician and former filmmaker who worked for two years with the famed Japanese director Akira Kurosawa, directs the Center on Media and Child Health. Much of Rich’s research has focused on the dangers stemming from the violence depicted on television and, more recently, the violence that permeates video games.

One 2004 study by another group compared the physiological responses of adults playing four different video games, two with storylines and two without. The researchers found that story-based video games led to significantly more character and game identification and increased physiological arousal. Other studies have documented how such physiological responses can lead to aggression. “If you watch a violent show and a half hour later go to a store where someone cuts you in line, you’re more likely to respond aggressively,” Rich says. “Over time, small incidents accumulate and form patterns of violent behavior.

What matters is that you learn from what you experience. ” And by learning, he means the hardwired kind. “Brain mapping indicates that media violence is processed along primitive survival pathways and stored in long-term memory,” he says. In other words, we embed media violence deeply in our brains. In work with functional magnetic resonance imaging, or fMRI, Rich’s team has discovered that “the brain regions activated when viewing violence onscreen are the same ones that light up when those suffering from post-traumatic stress disorder relive their traumas. ”

Alvin Poussaint, founder of the Media Center at the Judge Baker Children’s Center and an HMS professor of psychiatry, says that the way children learn from television can cause another form of lasting harm. “If children watch ‘edutainment’—shows that teach through song and dance—they begin to associate learning with an entertainment format and expect that format when they go to school,” he says. “But teachers aren’t going to sing and dance for them. So then children complain that school is boring. Compared to the fast-paced, exciting shows they’re used to on television, it is boring.

Nothing will meet that standard. Television constantly ups the ante. ” Some of the newest research suggests that television and the multimedia world in which children simultaneously watch MTV, listen to iPods, and chat on the Internet may be contributing to the increase in diagnoses of attention disorders. Rich believes that fMRI studies on attention, which are only now just getting started, will help establish whether a connection exists. Certainly, researchers have found a correlation between media use and reading. “Kids who watch the most television don’t do as well in school,” says Poussaint. Television is not the best way to learn; it’s too passive and noninteractive. ” A 2003 study found that toddlers and older children with screen media in their bedrooms learned to read later and read less than those with no screen media in their rooms. The Oompa-Loompas begin to seem like prophets. Media can be a Good Influence on Development John Livingstone ’58, a pediatric psychiatrist at McLean Hospital, an HMS assistant professor, and a consultant to the television industry, is campaigning for PBS to embed emotional literacy in its new programming and for the cable industry to embrace health-risk standards. Television shows can model positive ways for handling feelings,” he says. “Social learning research shows that when children watch likable characters struggling with decision-making, they can learn better impulse control, especially when they see the realistic results of the choices the characters made. ” The power of prosocial programming can be so strong, Livingstone adds, that even violent content—when portrayed realistically and in the context of outcomes—can be beneficial. “If it’s handled well,” he says, “violence with consequences can promote socially responsible behavior.

The program could retain its dramatic tension while modeling a socially acceptable option in the teenager’s world. ” Change Media Intake, Change Everything Else Strasburger, who researches media’s effects on children and adolescents at the University of New Mexico, also wants to promote media literacy, but finds it difficult to convince physicians, parents, and teachers that the issue should take priority. “When I consulted with the National Parent Teacher Association,” he says, “its leaders had a hundred concerns on their list, and media literacy was nowhere near the top.

They wanted to talk about obesity, eating disorders, and bullying, but didn’t realize that media affect all those problems. Many parents and teachers believe media have a minor influence. That might have been true when they were growing up, but it sure isn’t the case now. ” Poussaint adds that parents should play an important role. “Parents need to watch television with their children and explain what’s make-believe,” he says. “Commercials are especially insidious, because children don’t begin to understand the persuasive intent of ads until about age eight. Commercials also pit children against parents.

Television tells children a particular candy bar will make them happy and, when parents refuse to allow it, the children see their parents as denying them this happiness. ” Strasburger says some of this work can be done in school. “We need to teach kids skepticism about advertising and television programming,” he says. “They should understand, for example, why a commercial or show airs when it does. We already have a system in place for teaching media literacy: sex and drug education programs in schools. Both could incorporate media literacy, and teachers could take the lead. ”

How Did Mass Media Influence Adolescents and Children in the Last Ten Years?. (2018, Aug 23). Retrieved from https://studymoose.com/how-did-mass-media-influence-adolescents-and-children-in-the-last-ten-years-essay 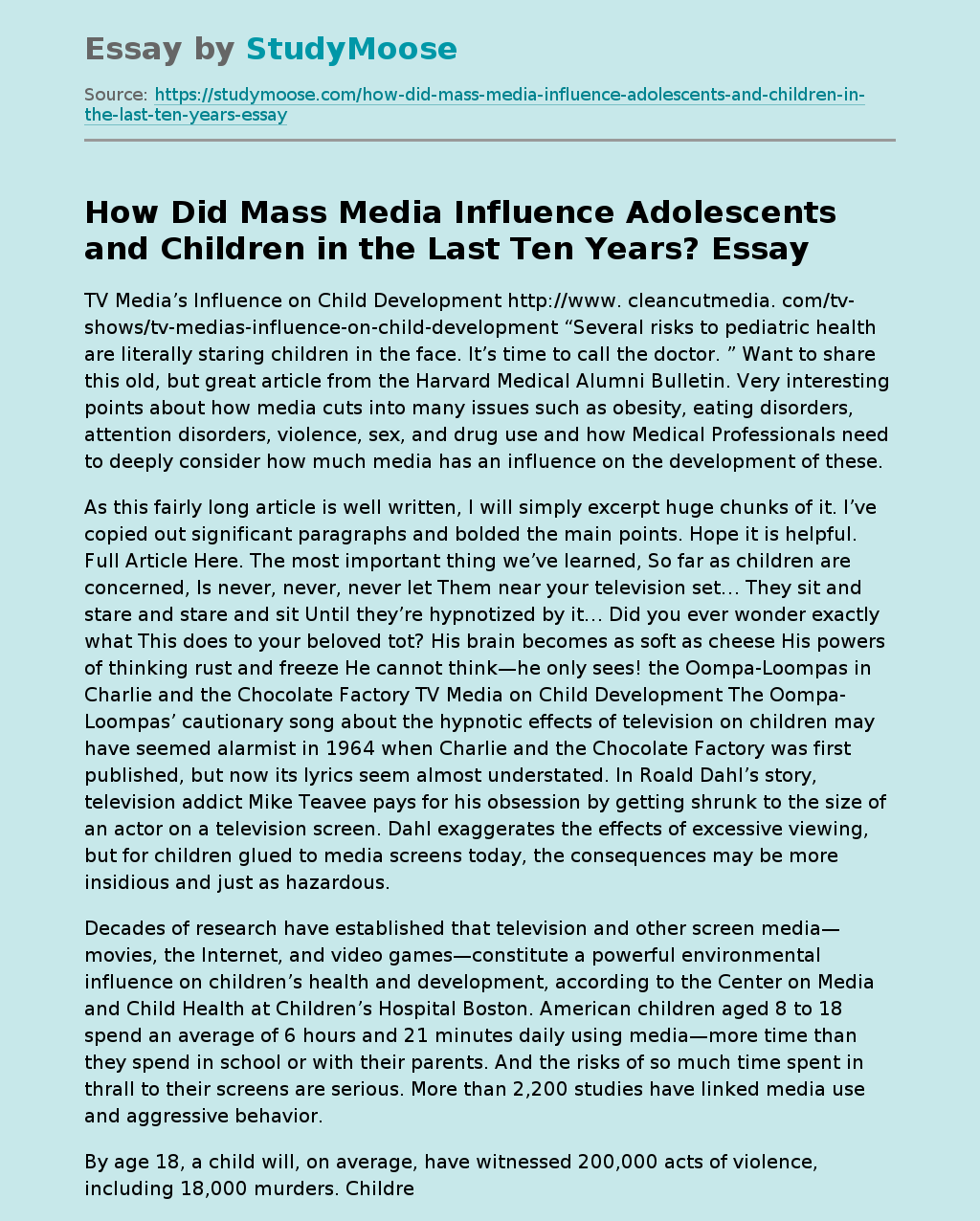