This essay is about chapter ten page 104 of the picture of Dorian Gray. I’m going to be looking at plot, theme, character, style and context of this piacular page, I believe this chapter is one of the most crucial chapters as its about how Dorian completely turns away from all goodness and loses himself in the thought of everlasting beauty. All while under the influence of Lord Henry. And this all starts when he is even the “yellow book”.

On this page Dorian seems especially selfish and arrogant, in fact, he’s is angry with Lord Henry “it was certainly stupid of him to have marked it with red pencil.

Don't use plagiarized sources. Get your custom essay on
“ This essay is about chapter ten page 104 of the picture of ”
Get custom paper
NEW! smart matching with writer

Victor might have read it.” He’s anxious because Victor could have accused Dorian of Sibyl Vane’s death rather than having any sympathy for his now dead fianc?, as he never really loved her rather, he was in love with her acting but not her. He reassures himself by saying that he had nothing to do with her death and there was nothing to fear.

This shows a distance that Dorian has from reality. He fell in love with Sibyl’s Shakespearian’s heroines rather than her true natural self. He’s obsessed with the art form, and the sensations that she creates in his mind. This aligns with the selfish idea of aestheticism, what is real or true doesn’t matter, it is only the experience that one feels is what is important. Thus, her death in the newspaper is only important in how it will affect him.

Dorian doesn’t seem to be addressing the real problem as the picture in the attic is becoming uglier and uglier, due to his sinning. He is blinded by his beauty, he knows that he will wither and age without the picture. His goodness is only a pose, he is just playing the part of a good person. The question is, is it possible to be good continually or can the temptations lure you away from goodness? How difficult is it to be good without being honest, being honest about our nature, being brave enough to throw away the mask that’s we wear. This mixes in interestingly with later on in the book where he leaves a girl before she is encaptivated by him and succumbs to his corrupting practices. He thinks that by doing a ‘good thing’ by leaving the girl unmolested, that his painting by go unchanged or even repaired. This again mixes in with the question of posed goodness and true goodness. What is the difference between the two? His actions of being a good person art just mere poses, but it does question human nature and the difference between posing and being natural.

Relating this to Wilde’s life, it might be very difficult for him to be honest and good. His life is split into two, his family life and his homosexual life, this homosexual life which he denied and his family life which he strove to make work he might’ve genuinely wanted to be a loving and caring father to his children, so in a sense, he is torn between balancing his two lives. Therefore, he appears all goodness in his role as a family man which was a pose while at night, he lived the life he desired. His honesty was undermining his goodness, being honest was like destroying the picture and trying to be honest confronting with the reality of his own nature that he can be truly good. This context reflects much in the book. There is the same double life where Dorian is outwardly beautiful and sociable, and even after he kills his chemist friend he goes to the opera being cheerful, he shows the same double life as Wilde himself – the dark side where he corrupts people, and the bright side where he socially conscious and dresses beautifully. This page shows it as a whole, the figment of the beautiful and true Sibyl Vane circled in the newspaper which only incites worry, plotting, and anger from Dorian.

Wilde seems to stand in all three characters, as his famous saying goes “Basil Hallward is what I think I am: Lord Henry what the world thinks of me: Dorian what I would like to be in other ages, perhaps.”(Ross,2011) Wild seems as though he’s playing a game with us as he’s ducking and diving through the three characters and we are unsure of who he truly is in the novel, he might have wanted to be Dorian as he is the target of everyone’s affection. Every personality or every individual is divided, there are three parts to him and perhaps there are three parts to every individual, the readers of this book may have a part of them that wants to be stunningly beautiful forever, or to be as clever and witty as Henry, or as gentle and earnest as Basil Hallward. Again, this shows the fluidity of personality and what natural actually means. There is no character who is concrete, and each character seems like an element to an overall piece of art, like different colour brushstrokes in a painting. Perhaps the writing is highlighting how much we rely on art and other characters in our lives to make sense of everything or maybe investigating what it means to be human and what part we play in the tapestry of life.

This is a book about morality and goodness, it’s about moral choice but also power and how one uses power, whether power’s used for good or for bad, in Dorian case he decides to abuse that power for evilness as he is driven by his desire and obsession with eternal youthful beauty and uses this beauty to his own advantage. We can also argue that maybe he isn’t to blame as he is just like a puppet being used by his master which is, in fact Harry. Harry is constantly playing with Dorian’s thoughts for his own amusement. his reinvention of Dorian and the yellow book represents the “poisonous” influence Lord Henry has on Dorian; Henry gives the book to Dorian as a kind of experiment, and it works horrifyingly well (Shmoop Editorial Team.2008)

Dorian immediately falls under the power of the “yellow book”, It is well-worn, and the reader can assume that Lord Henry knows its contents and anticipates its effect on Dorian. He is enthralled by the story and immediately adopts it as a blueprint for his life. (Cliffnotes.n.d.). The yellow book is a reference to J.K. Huysmans’ ? Rebours novel of the decadent period (“Against Nature”) it’s about a wealthy character who dedicates his life to look for many aesthetic sensations, without caring about societies views of him. This is similar to what Dorian would eventually become an emotionless robotic being, only in search of the next new sensation. Over the following eighteen years, Dorian experiments with every vice, influenced by a morally poisonous French novel that Lord Henry Wotton gave him.

Art as a Mirror is a theme which is illustrated by the actual picture. Reflecting Dorian’s morality and his true nature and works as a mirroring image of his soul. This is echoed in Wilde’s preface that “It is the spectator…that art really mirrors.” Though, the first appearance of this theme was earlier in the preface, with Wilde’s argument that “the nineteenth-century dislike of realism is the rage of Caliban seeing his own face in a glass.” Realism is a genre of artistic expression that is said to have shown the 19th century its own reflection. The horror that Dorian shows when observing the portrait, and the feelings that he tries to escape through drug addiction, sins, and even murder, may be considered as a way of him expressing wrath at observing his true self. On reflection it actually is a massive mythical stimulus on this particular unique novel: Dorian’s obsession can be compared to the tale of Narcissus. Gray also stares at his reflection in a lake and ultimately falls in love with his self-image and is his downfall. Oscar Wilde aims to convey the idea that real beauty cannot accompany an immortal life.

The decadent period makes its appearance felt in which it was one of the most central and wild movements at the time. If it was perceived that an individual who was thought to be decadent lived a carefree and reckless life, aimed entirely at achieving pleasure and happiness. The contrast between these two words are when happiness increases when it’s shared whereas pleasure will diminish if you shared it around. The same feeling is shared by Dorian in the novel for his decadent soul. Dorian becomes indulged in his commitment to a life of vanity and debauchery when he hides and locks the portrait of himself in the schoolroom attic, and from then on, his life of decadence continues.

The Picture of Dorian Gray (1891); Arthur Machen’s ‘The Great God Pan’ (1894); H G Wells’ The Time Machine (1895) and Bram Stoker’s Dracula (1897) all explore the theme of the human mind and body changing and developing, mutating, corrupting and decaying, and all do so in response to evolutionary, social and medical theories that were emerging at the time. Here we see that as genres changed that Picture of Dorian Gray moves into an era when the writer is fascinated by the human mind and especially how Dorian’s mind can be altered using Harry’s influence and it can be seen that he was corrupting Dorian in his behaviour. Also, the portrait and the body changing keeps with this theme. Social theories at that times were an all-important aspect of society as homosexuality was impressionable. The Victorian times was about progress and a time when society was to be cleaned up and a moral standing put into place. Many critics argued that his mention of Undertones of homosexuality was a dangerous quote, but many would argue he was mocking at the times.

This essay is about chapter ten page 104 of the picture of. (2019, Dec 14). Retrieved from http://studymoose.com/this-essay-is-about-chapter-ten-page-104-of-the-picture-of-example-essay 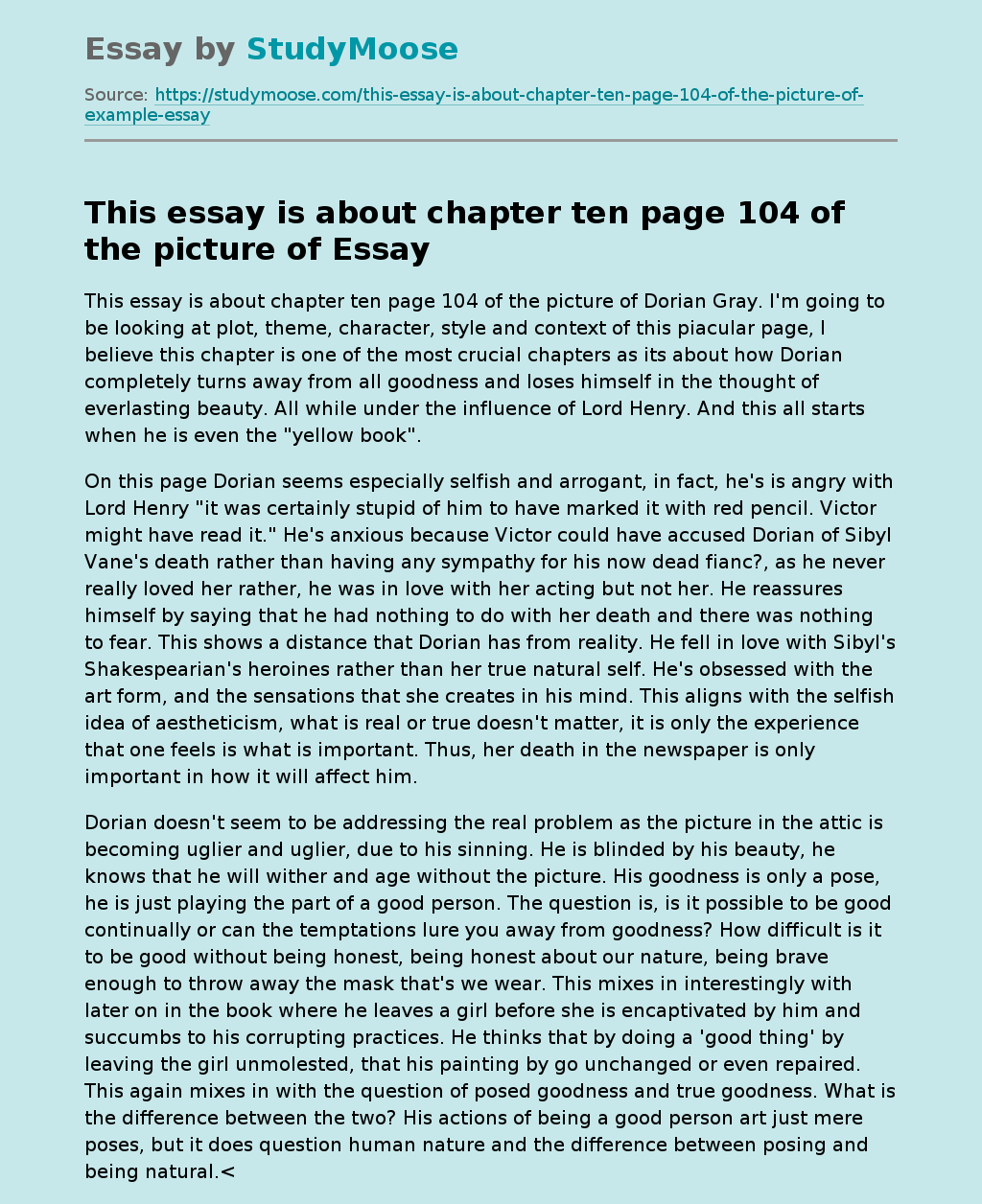