What Overcoming Adversity to Become a Better Person?

In every person’s life, facing adversity and overcoming it is one of the biggest challenges that there is. People struggle with different types of adversities and while there some people who manage to overcome them, others are not so lucky and find themselves entangled in a web of problems for their entire lifetime. However, as painful and problematic as they are, adversities are important in that if a person successfully overcomes them, they become stronger in character and as a human being as well.

Don't use plagiarized sources. Get your custom essay on
“ What Overcoming Adversity to Become a Better Person? ”
Get custom paper
NEW! smart matching with writer

This paper is a discussion of the adversities I have faced as a foreign student having relocated from Saudi Arabia to the United States. The paper will also address family, cultural and personal tradition that are meaningful to my country of origin.

One of the major challenges faced by any international student would be the issue of relocating to another country to further one’s studies (Long, 2005).

In my case, it was not any different since I have faced numerous adversities some of which I still struggle to overcome. My country of origin is Saudi Arabia, which means that the major language of communication is Arabic. However, with the relocation to America, this meant that I had to learn English as a second language which is the main language spoken by American citizens. Initially, learning another language was very challenging since the language is not even closely related to Arabic. Communicating with other students in class was very problematic since I could not understand very well what some of them were saying.

On the other hand, I would find it difficult to shop for most of the items on the shelves are named in English. Another major adversity I faced is the culture shock of being away from an environment and people I had become used to interact with on a daily basis.

The culture of Saudi Arabia is very much different from what I have experienced here in the United States. The roles of religion, gender, family and education all differ when I compare them to that of the American culture. In Saudi Arabia, our culture dictates that people should live together in harmony as a family, but in America, this is entirely different. I found it very difficult to adjust to this life since it is not what I was accustomed. However, I have managed to overcome most of these adversities and they have contributed to making me a better person. For instance, now I can speak another language besides Arabic and I have experienced a different culture besides that one of my country.

A family, cultural or personal tradition that is meaningful to me

In Saudi Arabia, the country, mainly comprises of an Islamic culture with almost every citizen being a Muslim (Ham and Madden, 2004). In this regard, there are many families, cultural or personal traditions that we uphold and believe contribute a lot in defining who we are as a nation (Long, 2005). One of the most important tradition to us is that women are not allowed to drive in Saudi Arabia. The reason for this is that the Islamic establishment ruled that it is a law that every woman should have a male guardian accompanying them wherever they go (Ham and Madden, 2004). To us, this tradition is important since it gives the man control over her wife and family. If a woman wants to drive, she can only do so with the permission of her husband who instead prefers to drive her. This way, the Saudi Arabian culture ensures that men are the head of the home while the woman is their helper and has to listen to whatever he says.

The person I would like to spend a day with (living, deceased or imaginary) and why

One of the people I would like to spend a day with must be my grandmother who unfortunately passed on five years ago. She was one of my favorite relative and person that I found interesting to spend time with. She always gave me a lot of advice about life and how I should carry out myself in the presence of other people. In addition, my grandmother guided me to stay strong in my faith in Islam and to never forget to say my usual prayers every day. Moreover, my grandmother was a very good cook who loved preparing delicious meals whenever I went to visit her. After the food was ready, I would help her serve it and we would both enjoy it as she gave me stories about our culture and how it originated. She was a very wise woman who knew a lot of things about life in both the present and the past. If she was alive today, I am sure I would still be enjoying her company very much.

In conclusion, struggling to overcome adversities is not very easy but once a person makes to overcome them, they become a much stronger person. In my case, I have learnt to overcome adversities related to relocating to the United States alone, which has made me a much better person. In fact, I have more friends who are not from my country of origin. Furthermore, I have explained why the tradition of women is important to Saudi Arabian citizens since it is one of the ways that men are able to assume total control over their women. I have also cited that my grandmother was one of the people that I would desire to spend more time with, were she alive today. All in all, it is these occurrences that have contributed to shaping the person I am today.

Adversity is a dificult situation what happened in our lives, problems large and small, present themselves to us throughout our whole existence it dependent each people who overcoming adversity. I believe that every person in the world has a certain strength inner or outer with adversities.

First, be aware of and accept that adversity is inevitable in life because, adversity is part of life. To avoid or resist it will only make it persist. Everywhere you look in the world there is unmistakable struggle. There are floods, tsunamis, wars, and calamities of all types. Even within your own circle of family and friends there is death, loss and tragedy. Life is not easy If you expect it to be, you will perpetually disappoint yourself bad experiences that afect our dayli life this harsh reality can be hard to visualize.

Second, when you try to respond positively and constructively to your biggest challenges, the qualities of strength, courage, character and perseverance emerge from deep inside of you. Focus on what you can improve, your reactions, confidence and attitude. Then important thing is simply to find one positive thought that inspires and helps you move forward. Hold on to it strongly, and focus on it. You may feel like you don not have much, or anything at all, but you have your mind to inspire you and that’s really all you need to start moving forward again.

What Overcoming Adversity to Become a Better Person?. (2015, Aug 08). Retrieved from https://studymoose.com/overcoming-adversity-to-become-a-better-person-essay 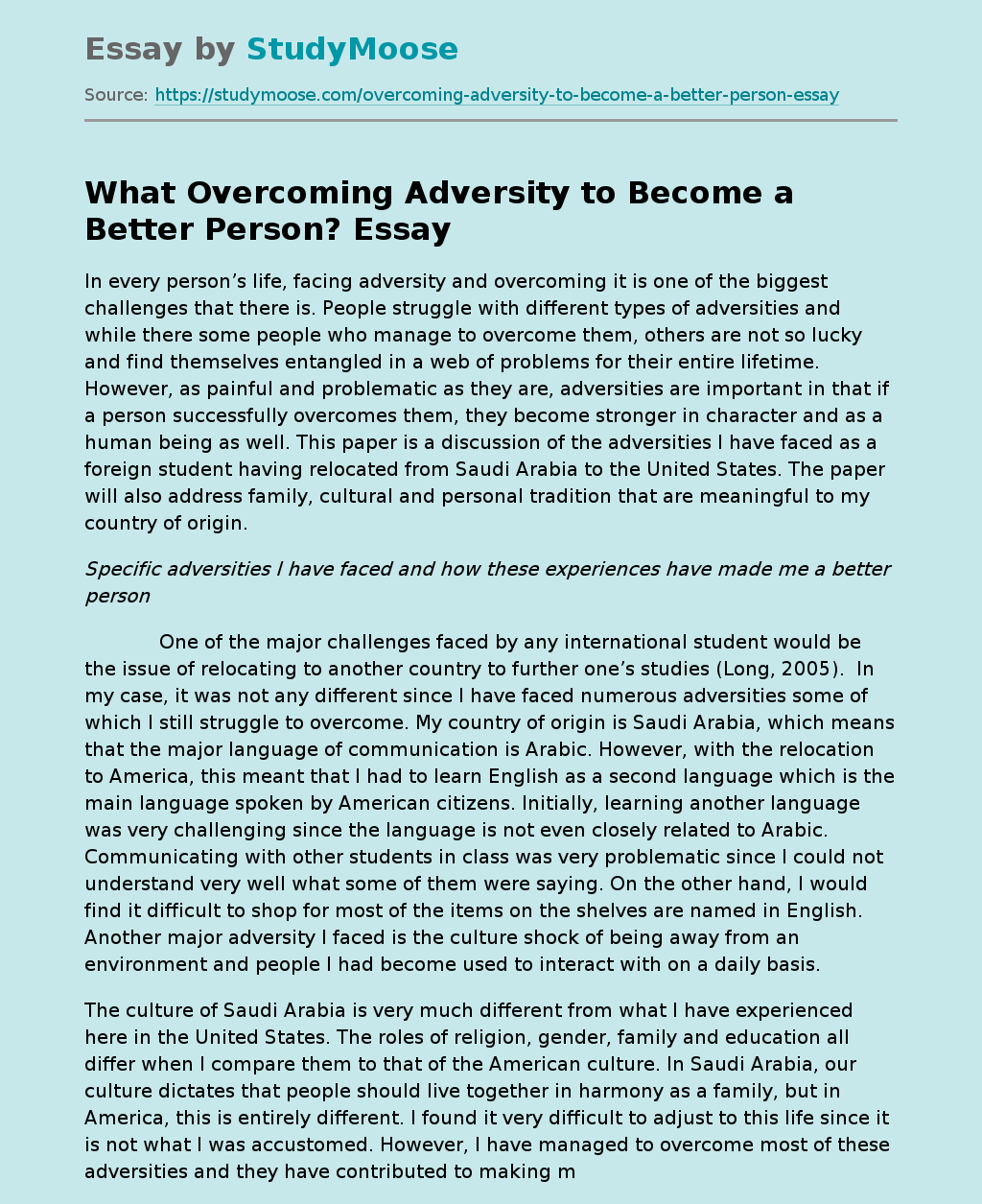