Adversity is an unfortunate event or circumstance. It is a part of our everyday lives, sometimes more impactful than others, but nonetheless it must be overcome to be successful. Throughout the course we have seen a number of characters overcome adversity in a variety of different text or film studies, the three best examples which I will be discussing are; Romeo and Juliet, What’s Eating Gilbert Grape, and A Raisin in the Sun.

To start, in Shakespeare’s “Romeo and Juliet,” the two lovers face an abundance of obstacles to overcome for them to be together.

The most powerful adverse is the violent feud between the Capulets and Montagues. Despite this, they showed a strong commitment to each other as well as bravery in order to carry out secret plans to be together. The nurse and Friar Laurence were instrumental in helping the young lovers secretly meet to continue their relationship, get married and ultimately consummate their marriage. Friar Laurence helps hide Romeo until the Prince declares his ruling and safely gets him to Mantua where he has been banished as punishment for killing Tybalt.

Juliet eventually takes the ultimate risk in staging her own death to trick her family into thinking she is dead so that she can escape with Romeo forever. This risky move ultimately takes her life. Her bravery and willingness to sacrifice or risk her life didn’t matter if it allowed a chance to be with Romeo and not have to marry Paris. With these examples, one can see how committed they were to overcome their challenges and adversity.

One could argue that they overcame their overall adversity through their tragic deaths as their souls may have ended up together in the end.

In the film, “What’s Eating Gilbert Grape,” a young man named Gilbert’s life becomes difficult and even unmanageable at times after his father takes his own life in their family’s house. He faces the adversities of an obese and needy mother who he becomes responsible for taking care of. He also has to deal with a mentally disabled younger brother named Arnie, who constantly gets into trouble. Gilbert shows maturity, perseverance and resilience by continuing to carry out his mother’s demands and have the responsibility of his family on his shoulders.

In the play, “A Raisin in the Sun,” a Chicago family faces many internal adversities among themselves. This is most evident as the family has different ideas on how to spend the $10,000 cheque they get after Mr. Younger’s death. Each idea or dream is individual, except for Mamas, as she just wants her family to be happy together. These conflicting dreams and ideas are overcome in the end by the family coming together and staying strong and refusing to accept money to move out of an all-white neighborhood. Led by their strong mother, they overcome the adversity of racism with their resistance to move.

In conclusion, these examples show how various characters have overcome adversity in various ways. The character traits of courage/bravery, sacrifice, perseverance, resilience and commitment prove to be successful no matter what challenges or obstacles people face in life. 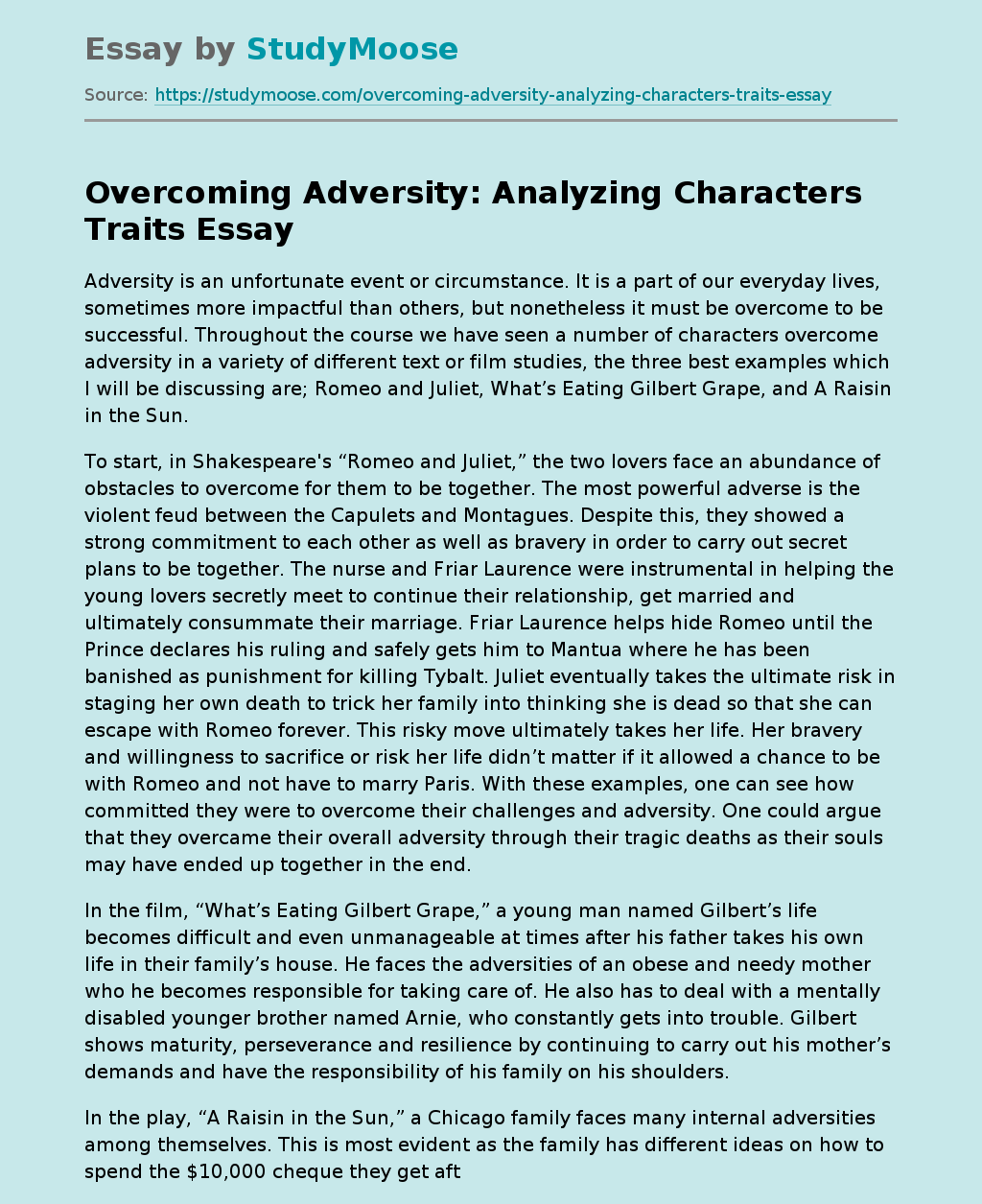