Adversity often comes as a surprise to people. It is something that everyone will likely experience which leads one’s personality to develop to go with these circumstances and to rely on their closest relatives and allies. Shakspeare’s Hamlet is a tragedy. Hamlet, when faced with adverse conditions, undergoes emotional and psychological changes, ultimately succumbs to a tragic downfall. He fails to get the throne that was left by his father and his mysterious death. Hamlet’s madness in the play drives him delirious falling into various results.

Don't use plagiarized sources. Get your custom essay on
“ Overcoming Adversity in “Hamlet” ”
Get custom paper
NEW! smart matching with writer

Hamlet is inspired by the ghost’s message, infidelity of his mother Gertrude and the lies that fed him up by the people around him. With these spurs, Hamlet’s actions varies as the play goes on.

In the beginning of the play, Hamlet faces a torrent of emotions after the death of his father. Hamlet ponders on the thought of suicide, “O, that this too too-solid flesh would melt” ( I. ii. 129 ) because he feels that his life no longer has porpuse. At the same time, Hamlet knows that as a Christian, it is inhumane to commit such suicide. But, suddenly, everything changes when he sees the ghost, and when the ghost tells him about everything that happened to his father. Also, beckons him to avenge his father’s death to help restore order in Denmark, and to kill Claudius but leave Gertude. The uncle that was once innocent and is pure now describes him as murderous, and Hamlet begins his insistent existential debate within himself:

“To be, or not to be? That is the question
Whether ’tis nobler in the mind to suffer
The slings and arrows of outrageous fortune,
Or to take arms against a sea of troubles,
And, by opposing, end them? To die, to sleep
No more and by a sleep to say we end
The heartache and the thousand natural shocks
That flesh is heir to ’tis a consummation” ( III.

This debate develops into Hamlet\’s loss of will. Then, he considered the ghost’s words as motivation for him to sweep to his revenge and take action against Claudius. He started to look at Claudius’ behaviour, Hamlet knew that Claudius killed his father to overthrow him as king and that he lost the throne which gave him more spur to kill Claudius.

In addition, Hamlet became increasingly angry toward his uncle Claudius when he thinks about Gertude’s marriage from the murderous ( Claudius ) after a very short time from his father\’s death. Hamlet distinguishes to his mother between genuine grief (his own) and false grief of Gertrude and Claudius,

“For they are the actions that a man might play,
But I have that within which passes show,
These but the trappings and the suits of woe”, ( I. ii. 84-86 )

Equally important, “Frailty, thy name is woman!” Hamlet ( I. ii. 146 ) which means that Claudius is seducing Gertrude even before Old Hamlet’s death. The idea of that is his mother betrayed his father made him go crazy in his mind and motivates him more to kill King Claudius. These adversities after each other in short time were internal forces for Hamlet, because he did not want Claudius or anyone to know what was circling in his mind. Thus, Hamlet wants to take his revenge in a smart way, he decides to reenact the murder of his father with the production of the Murder of Gonzago, also known as the play within the play, if Claudius is disturbed by the play; it will reveal his guilt. In Hamlet’s words , “The play’s the thing – wherein I’ll catch the conscience of the king” ( II. I. 602-603) which proves how adversity makes people think in a realistic way to go through the circumstances and take their revenge.

Furthermore, Hamlet fed up of the lies that he is encountering with other characters in the play. Not only Claudius and Gertude, also Ophelia his love, Rosencrantz and Guildenstern his friends. Hamlet encounters the lies from Ophelia. Ophelia lied at the point when they are only two people in the room but Polunius and Claudius are hiding, spying on Hamlet to figure out why he is mad. When Hamlet ask Ophelia about where her father was Ophelia answered, “At the house, my Lord” and suddenly popped out in Hamlet’s mind that he couldn’t possibly trust Ophelia’s words. Hamlet continuously insults Ophelia because he knows that Claudius and Polonius are hiding. He wants to make them believe how mad he is.

Besides, Hamlet\’s closest friends Rosencrantz and Guildenstern lied to him. Hamlet suspected immediately the sudden appearance of this two and tested them with their loyalty. At the end he received the response that, ”he sent us” from one of them. They are charged by the King and the queen to discover the cause of Hamlet\’s transformation in personality and sent him to England when he realized that Hamlet wants to kill him. He pretends he has Hamlet\’s interests at heart and that he is sending him to England to protect him, saying:

“Hamlet, this deed, for thine especial safety
Which we do tender as we dearly grieve
For that which thou hast done must send
thee hence With fiery quickness” ( IV. iii. 41-44 )
With all the lies from other characters, Hamlet had the motivation of killing Claudius is now solid and firm that there are no doubts that the king manipulated them all to hide the murder that he committed towards Old king Hamlet.

In conclusion, adversity makes people become downhearted and hopeless before they eventually come to a balanced life. During this phase of Hamlet\’s life, he essentially loses his identity and sense of purpose. Added to his father\’s death, the re-marriage of his mother to her husband’s killer and all the betrayal. Hamlet became so caught up in his own issues that he lost all consideration for everyone around him. However, Hamlet, Claudius, Gratitude, Ophelia and all these characters die in the end of the play. Shakespeare created the most tragic play with the most dramatic character, Hamlet. The theme of this play is that revenge itself is deadly. Hamlet causes his own downfall by his obsession with revenge. 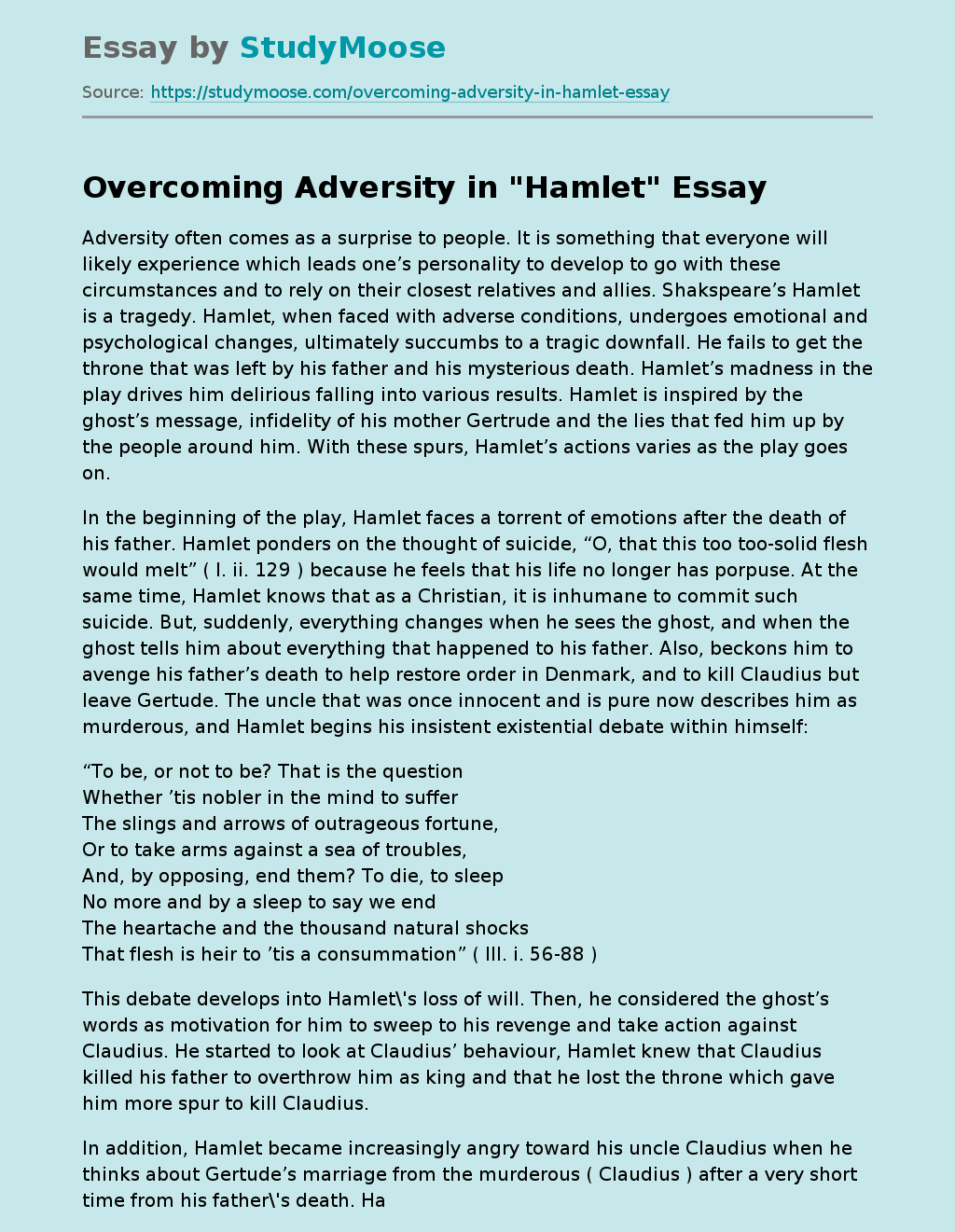