Origins of the French Revolution

The French revolution was a significant historical event that changed France forever. On July 14, 1789, King Louis XIV called an estates-general meeting to discuss the problems that France was facing. The three estates couldn’t come to an ultimate solution for their crises, so the third estate formed the National Assembly and called for new reforms that benefited everyone. The disputes between the classes created a lot of tension which ultimately led up to the start of the French Revolution. The revolution lasted 10 years and was brought to an end in 1799 when Napoleon Bonaparte took over the government in a coup d’état (Doc.

Don't use plagiarized sources. Get your custom essay on
“ Origins of the French Revolution ”
Get custom paper
NEW! smart matching with writer

4). The French Revolution was caused because of a weak, uncontrolled king, an unfair tax system, and a social struggle between the French people; its legacy of bloody revolution spread around the world.

King Louis XIV was a terrible king who didn’t use his power properly. He ruled by the divine right theory which allowed him to rule straight from God and not the people (Doc.

1). King Louis XIV was an absolute ruler meaning he had supreme power and made final decisions. He controlled taxes, created laws, and appointed officials who he thought were best. The people had very little said in the government and were starting to feel completely left out with no rights.

Another reason for the French Revolution was because of an economic crisis. There was a bad harvest so food shortages occurred, and many people were left hungry. France gave away most of their money to the United States for the American Revolution because they wanted allies.

The result of this was that France was in great debt, which meant the third estate had to pay extremely high taxes. The clergy and nobles were excused from being taxed, but 100% of the common people and peasants had to pay taxes to the government. The commoners who made the least amount of money and took up 98% of the population had to pay the most taxes which was awfully unfair (Doc. 2).

The French Revolution was also caused by a social struggle between the French people. Feudalism, the social system between different classes, caused many riots and revolts from the third estate. The first estate and the second estate owned most of the land and didn’t have to pay taxes. The bourgeoisie and the peasants were living under unfair circumstances and were starting to become angry. On July 14, 1789, they revolted and stormed into the Bastille which was a prison. They freed people from their cells and rebelled together in an angry mob. The storming of the Bastille was a violent event that started the French Revolution and made a powerful statement to the government.

In conclusion, the French Revolution had many causes and many outcomes. Monarchy came to an end, along with serfdom and feudalism. The French Revolution created a huge impact on France and the rest of the world. The third estate was fighting for freedom and equality, which was very hard for them to obtain. They faced many hardships but then in 1793, Louis XIV was executed and that was the end of the monarchy. After the fall of the monarchy, the Constitution of 1791 finally abolished taxation and people had more freedom (Doc. 5).

Feudalism was abolished, and a republic was set up but was soon taken over by Napoleon Bonaparte. He took power and crowned himself as emperor. He set up the Civil Code, which gave the people more freedom, but restricted many women’s rights. Napoleon’s reforms set many social changes in motion in Europe which could not be changed back. According to Robert B. Holtman, “The lasting quality of Napoleon’s reforms outside France was in direct ratio to the length of time French control had been in effect and to the weakness of the local governments” (Doc. 8). Revolution became a well-known part of the political world and was used quite often (Doc. 9). It was also confirmed that Chinese students were inspired by the French Revolution to fix their government. Ultimately, the French Revolution affected the people of France and the whole world.

Origins of the French Revolution. (2020, Oct 15). Retrieved from https://studymoose.com/origins-of-the-french-revolution-essay 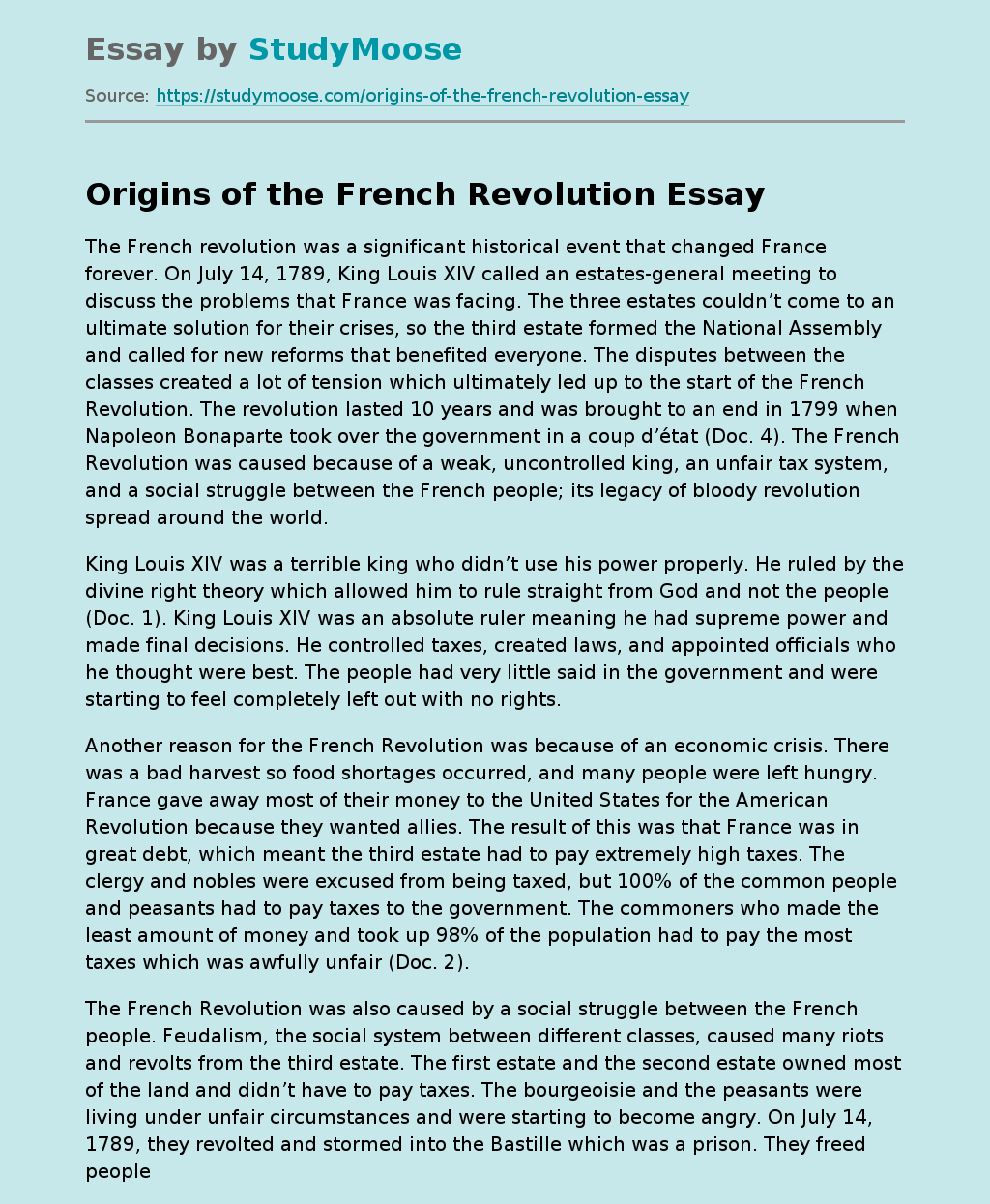