Oprah Winfrey was born in Kosciusko, Mississippi on January 29, 1954. Her name was supposed to be “Orpah” Winfrey, but the name was spelled wrong on her birth certificate, and pretty soon everyone was calling her Oprah. As her mom looked for a job in the North, Oprah lived her grandmother, who taught her to read and write. Once her mother, Vernita, found a job as a housemaid in Milwaukee, Mississippi, Oprah was sent to live with her, whose friends and other male relatives sexually abused Oprah during her childhood.

Don't use plagiarized sources. Get your custom essay on
“ Oprah Winfrey Bibliography ”
Get custom paper
NEW! smart matching with writer

As a child born into poverty, Oprah wore potato sacks as clothes with literally nothing else to wear. Due to her disruptive and abusive upbringing, Oprah moved in with her stricter father, Vernon, to Nashville at the age of fourteen.

Before attending Tennessee State University, Oprah went through a rebellious stage in her life where she experimented with drugs and lost a baby, who was born premature. It was when Oprah achieved a University Scholarship that she got into focus and started pursuing her career.

At Tennessee State University, Oprah got her BA in Speech and Performing Arts and graduated as an honor student. In addition, Oprah Winfrey won the Miss Black Tennessee beauty pageant at age 17.

At the age of 19, Oprah was the first African American woman television news anchor to work in Nashville on the WTVF-TV station, which was the beginning of her success. From there, Oprah began to be a role model when she joined the morning show on WJZ-TV called “People are Talking” in Baltimore.

After moving to Chicago in 1984, Oprah hosted on another morning show called “AM Chicago” at WLS-TV’s, which became the number one talk show. Not long after Oprah started working there, the “AM Chicago” show was soon renamed “The Oprah Winfrey Show,” which reached more than 40 million views a week, and went on to become the number one ranked talk show and is broadcasted internationally to more than one hundred countries worldwide.

The show is a major influence for women with the topics ranging from social issues including child abuse, health care, human rights, poverty, racism and education. Due to the show grossing $125 million by the end of the first year, Oprah was awarded $30 million of it. “The Oprah Winfrey Show” soon led to “Oprah’s Book Club” in 1996. In “Oprah’s Book Club,” she would bring up books that mainly appealed to her and most of the books she brought up went to number one best seller. In addition, a multi-media venture was announced by Oprah and Discovery Communications who created OWN: Oprah Winfrey Network, in which Oprah is the Chief Executive Office. She now hosts “Oprah’s Lifeclass,” a nightly program, on OWN. Not only that, she is one of the partners in Oxygen Media, a cable channel presenting programming designed primarily for women.

Not only was Oprah a talk show host, but she also has appeared in six films as an actress or she had a voice-over role. Between 1985 and 2009, Oprah played a role in “The Color Purple,” “Native Son,” “Beloved,” “Charlotte’s Web,” “Bee Movie,” and “The Princess and the Frog.” In “The Color Purple,” Oprah received an Academy Award nomination for best supporting actress. A stage version of the work on Broadway has since been produced by Oprah. On top of all that, Oprah publishes two magazines and has co-authored five books. One being “The Oprah Magazine” ,which is one of today’s leading women’s lifestyle publications and it has an average of 2.35 million readers each month and the other being “O at Home.” Oprah also has a radio station called the Oprah Radio, which airs on SIRIUS XM Radio, and her company website, Harpo Studios which made her the third woman in the American entertainment industry to own her own studio; she creates, develops, and produces original programming for network, syndication, cable and digital platforms.

As a Philanthropist, Oprah created The Oprah Winfrey Foundation which donates millions of dollars toward providing a better education for students. “The Oprah Winfrey Scholars Program” awards students scholarships who are determined to give back to their community. Oprah had a school built in Africa called Oprah Winfrey Leadership Academy for girls hoping to develop the future leaders of South Africa. Oprah’s Angel Network raised more than $80 million dollars and helped established 60 schools in 13 countries. Six $1 million donations to U.S. charter schools were distributed through Oprah’s Angel Network. Oprah initiated the National Child Protection Act in 1991, due to her determination to help kids around the world. President Clinton soon established the “Oprah Bill” to establish a national database for convicted sexual offenders in 1993. Her contributions and achievements have won Oprah many honors, awards and acknowledgements.

In Time Magazine, Oprah was acknowledged as one of the 100 Most Influential People in the World and has also received more than 40 daytime Emmy Awards. Oprah has also been announced as Television Performer of the year by TV guide. Oprah’s philosophies on success are “If you want to accomplish the goals of your life, you have to begin with the spirit,” “Unless you choose to do great things with it, it makes no difference how much you are rewarded, or how much power you have,” and another is “The key to realizing a dream is to focus not on success but on significance – and then even the small steps and little victories along your path with take on greater meaning.”

Some of her philosophies on business and work include, “Follow your instincts, that’s where true wisdom manifest itself,” “Be the one thing you think you cannot do. Fail at it. Try again. Do better the second time. The only people who never tumble are those who never mount the high wire. This is your moment, own it,” and “Passion is energy. Feel the power that comes from focusing on what excites you” (Farfan). Although Oprah Winfrey was born into poverty with a devastating childhood, she was able to rise from that and prosper into the woman she is today. Oprah’s is ranked number 151 on Forbes 400 with her net worth being 2.7 billion dollars, all self-made.

For the year 2003, Forbes published its list of America’s billionaires classifying Oprah Winfrey as the first African-American woman to become a billionaire. She is ranked number eleven for the most powerful women of our time. Not only is Oprah Winfrey classified as a T.V. host, actress, producer, magazine publisher, philanthropist, radio host, co-author, and news anchor, but she also gives back to the community and is classified as a motivational speaker, leading opinion maker, and a role model of our time. 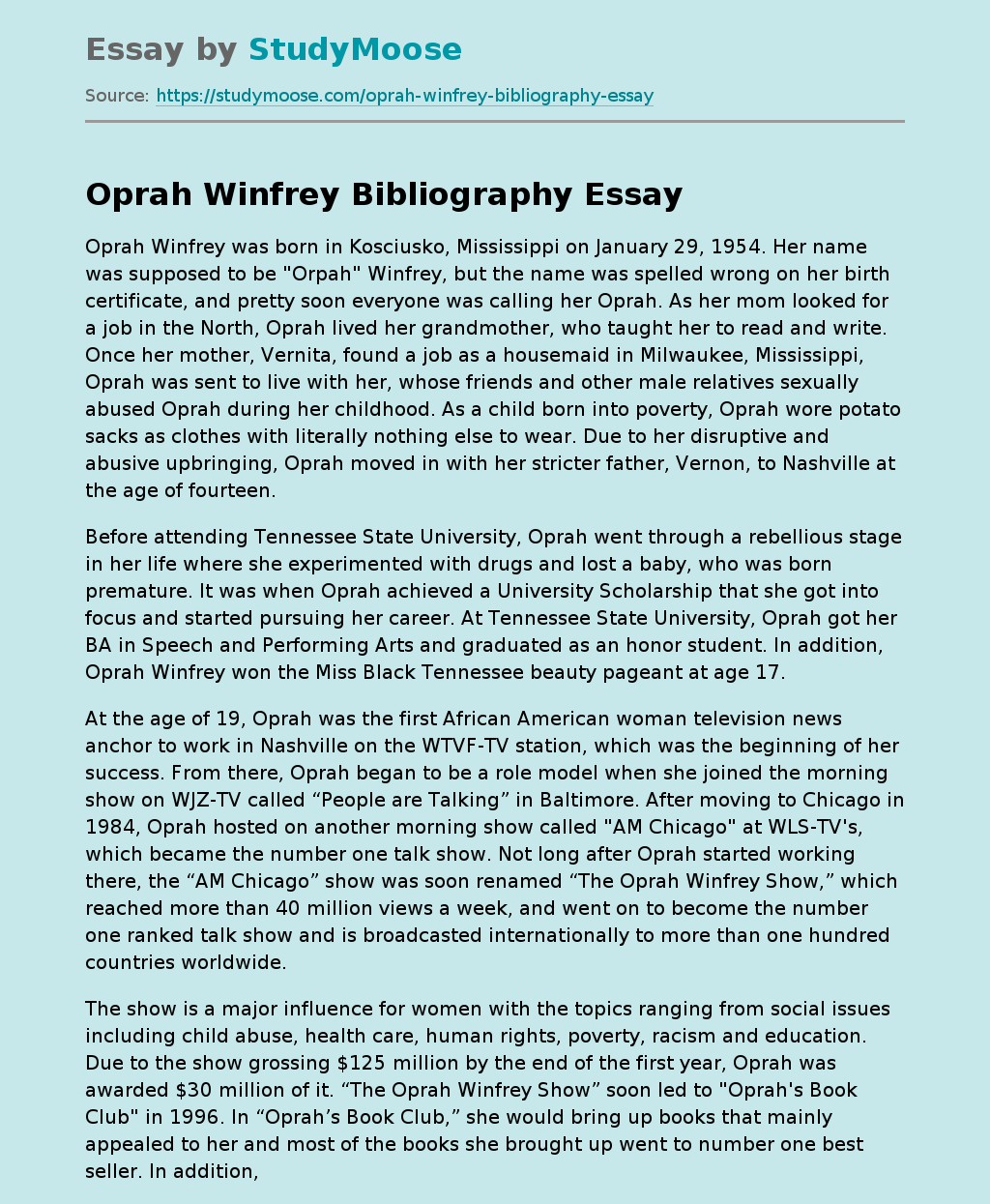