Summary: The field of information belongs to the serious problem on gender based online harassment .Critical research is require to empowering victims, for discouraging proprietor, and for increasing awareness among social media platform and can be done by education, polices and technology tools.

Don't use plagiarized sources. Get your custom essay on
“ Online Women Harassment ”
Get custom paper
NEW! smart matching with writer

Twitter is micro blogging app that is lanced to share information and participate in conversations in short form of message. By nature twitter is not a closed platform, conversation is not be able to restricted to particular group of users. But hash tag provided a space for women to share their issues about harassment and discuss their issues that they are face online.

In isolated tweet women easily describe the nature of harassment.

Women’s convey their message on hash tag about harassment and a form of excluding women’s voices from a digital public sphere. Mencallmething hash tag is providing medium in which women describe and discuss verbal abuse that they have receive online from men. Hash tag allowed women to detail their experience of harassment online in your own words. Harassment is done by using information technologies. The women who are harassed online can stop these illegal activities by complaints to the social media.

Online violence against women is an expression of gender discrimination and inequality that exist offline. Online violence against women is harmful for women. Individual women who experience online abuse understand that online violence is real violence but very often their friends and family don’t known and restrict women from accessing the internet if they complain of violence. Women deserve to live in the world that is free from physical violence. Women could not take part in public debates due to the distrustful environment. So hash tag provides a facility to all women to complain particular type of online abuse. Many researchers have found that rape and sexual violence are prevalent threats in online context. Online harassment is done by the use of information technology.

Stalking includes behaviour two or more time toward someone by another person that causes a victim to feel alarmed that violence might be used against them. Hash tag created a space for women to discuss the issue of online harassment and draw public attention to their suffering. While sexual harassment and discrimination is old as the human race. Still many incidents go unreported and there are large swaths of workforce unprotected. Hash tag provides a experience to women for stalking and harassment, how they can save themselves. They must carry a personal attack alarm and learn how to use it. Contact your telephone company to see what action they can take about malicious calls. Hash tag is a space for people to air their misogynist stories of harassment to empower others to stand for it.

Previously think that men are more aggressive than women but recent study suggest that there are significant sex difference in intellect, analytical power or social skills. According to all discussion hash tag concludes that women online harassment and sexual mixed on the forum. It ravels that online harassment of women is structural problem in society. Hash tag title was commonly perceived an offensive attack on male sex. The media use the term trolling that does not recognize that women are being attacked online based on the fact that they are women, and this is behaviour perpetrated by men. Social media harassment included unwanted comments, suggestion and advances on your Face book, Twitter and other social sites. If someone harassed feel uncomfortable by anyone comments on a friend wall or after receiving a sexually base tweet, harassment is taking place. Some may feel anonymity of online communities or the nature of media sites themselves, promote sharing without professional accountability.

There are polices that the social media must follow include always ask for evidence, you want to get as much information as possible like link, screenshot etc. Ask to see it yourself online when possible to make sure no editing has taken place. Look for the patterns in the alleged harasser. Make sure your sexual harassment policy include information about your personal emails and social media account. Online sexual harassment is political term that suggests that only male dominance have social control on cyberspace. Hash tag suggests that women’s are harmed by online harassment. Online harassment is closely relating with harassment that take place in public place.

Online sexual harassment restrict women’s ability to participate online equally with men. While with the help of Hash tag, women may be able to discuss their experience in private forum online. The voice of the women publically or politically challenged male social dominance was silenced. Despite the harm of online harassment are border but women’s have ability to protect themselves from illegal people and protect their carriers. 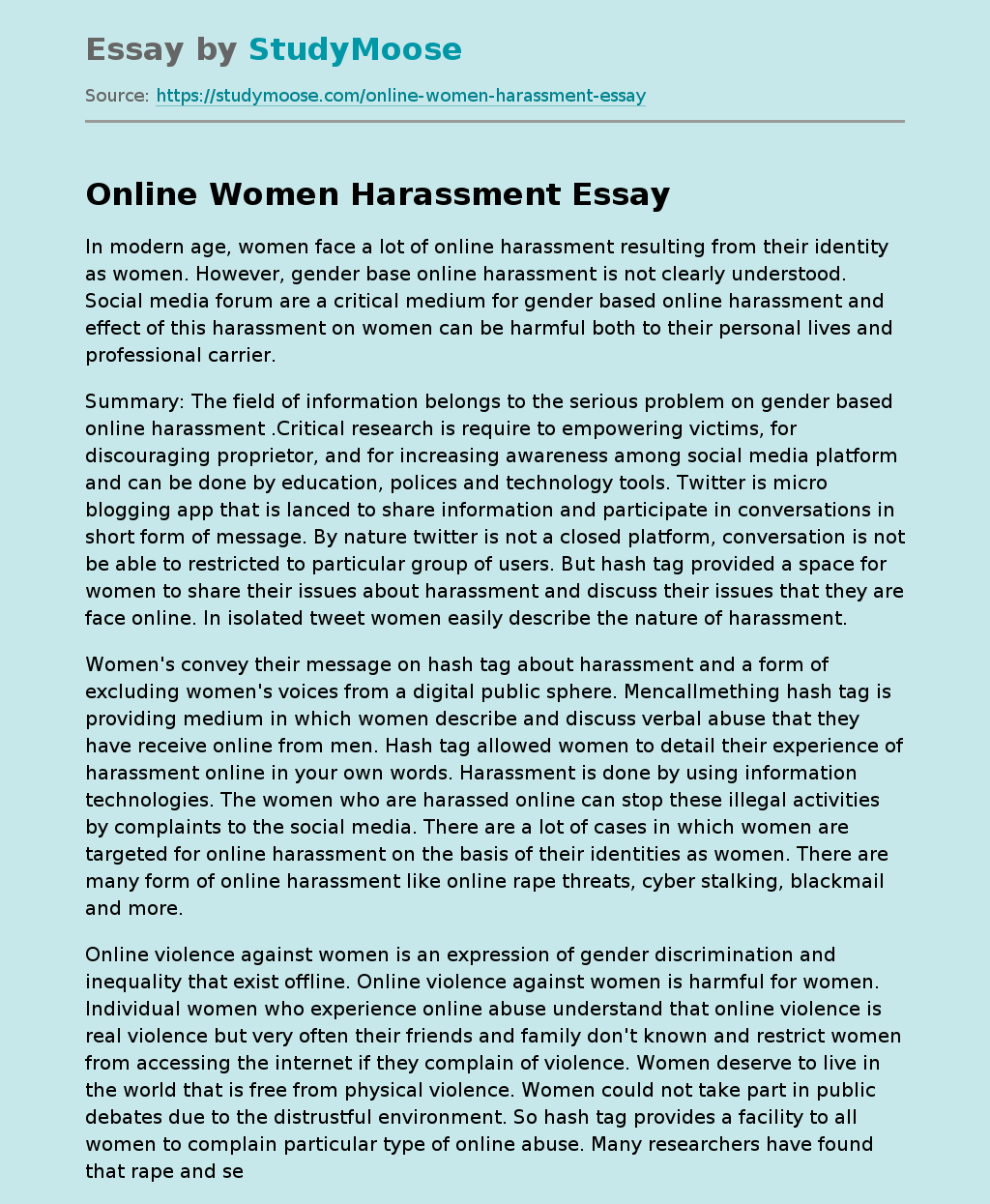