With the rapid development of technology, the Internet has become an effective mechanism for social networking. People can not deny the fact that a successful social networking is more possible to lead a successful life. A personal impression serves as an important role in establishing new networks and managing old ones. It was proved that people have more opportunities presenting themselves in the computer-coordinated communication settings than face-to-face environments. Therefore, regardless of generations, the ways how people interact with one another have been greatly changed by online social sites.

Don't use plagiarized sources. Get your custom essay on
“ Online Behaviors And Impression Management ”
Get custom paper
NEW! smart matching with writer

Individual behaviors may be restrained because of their awareness that their behaviors might possibly be seen by other people, and the fact that people tempt to look more appealing in any social occasions is obvious (Jeong, 2011). Since social media is served as a platform which is opened to public, people tend to pay more attention to how they appear and behave online. An experiment from Denton (2012) indicates that participants within heterogeneous networks such as Facebook have more desire to shift their impressions to others. A heterogeneous network is a network which is established for people without same interests, religions or common interests; in other words, people are able to speak or act freely on those websites.

This experiment explains further that people manage or even shift their image based on others views and attitudes.

According to Cummings (2012), the setting of profiles provides an opportunity for ones’ social life; people put effort into presenting a better image which aims at influencing others within the network. Jeong (2012) also declares that the process in which individuals attempt to control their impression with others is called “impression management”. Impression management can be used interchangeably with the term “self-presentation”, and its goal is to elevate people’s public image by performing behaviors based on how others evaluate them. Jeong also states that impression management usually occurs together with social desirability. Social desirability is defined as an individual’s tendency to describe themselves and behave in a manner in which they believe they will be viewed favorably in a situation. Moreover, Jeong also points out three main characteristics of self-presentation in online media platforms.

They are asynchronous, malleable and selective. Asynchronous means that people can edit and update self-presentational cues deliberately over time. Malleable means people can simply manipulate those cues. Denton (2012) explains further by stating that people behave differently in different situations or interact with different people with whom they have specific relationships. For example, a lazy and incompetent employee may spend his evening as a passionate and assiduous worker volunteer or he behaves as a hard-working worker only under supervision; in this case, employers might misunderstand that he is truly a diligent worker.

Thirdly, selective means people can improve their impression by choosing specific cues. Jeong explains this term by giving an example that individuals are more likely to donate or show their supports for charity campaigns as long as they realize that their participation would be noticeable to other people. Besides, there are some companies tend to elevate their images by sponsoring nonprofit organizations. To conclude, in general, people tend to behave favorably and try to create a positive impression to others on social media.

Social media has been a new and easy platform for people managing their impression. Sameer (2007) states that document preparation programs make it relatively easy to manipulate the appearance of profiles; also, programmability helps people keep track of contents to the audience, and browser application provide an easy way to distribute the original or modified profiles. Therefore, Krisanic (2008) concludes from her research that impression management has been commonly carried out by those who involved in social networking activities. Jeong (2011) also states that online media platforms are expected to provide people with a greater opportunity for impression management, and because of its “public display” which enables participants to articulate and make their social networks more manifest; furthermore, Ellison (2008) declares that this kind of “public display of connection” serves as important signal that helps people navigate their networked social world.

Cummings (2012) supports his idea. He points out that social network sites provide people a channel to present themselves digitally, and also gives them another way to provide details about themselves and establish or maintain their relationships in their own social network. Also, profile owners are not the only ones who are able to provide information on their own pages. Most sites such as Facebook and LinkedIn allow those who are involved in the connection to create additional information, and the use of wall posts and the recommendation are the examples (Cummings, 2012). All in all, the main characteristics of social network sites include the capability to make connection between people and share personal information; on top of that, it offers an easy way for people to manage their personal impressions.

The articulation of friendship connections is another facet of impression management; it might possibly be viewed from others as an identity marker to profile owners (boyd & Ellison, 2008). Although boyd and Ellison argue that online audiences’ comments may dominate user behaviors, Vallor (2012) thinks that those interactions are part of the reciprocity which serves a prime function maintaining friendships. Reciprocity is an original biological stimulus that operates as the core of human sociology and is the mutual characteristic of different types of friendships (Vallor, 2012). Take Facebook as an example, reciprocity emerge with diverse forms; it begins with the friend requests and accepting invitations correspondingly, responding to friends’ status by pressing “like” button, sharing photos and videos online, comments on friends’ status, and “tag” friends on pictures or posts. Therefore, a study from Vallor (2012) shows that instead of diminishing people’s interactions in their real lives, online social sites actually extend chances for such interaction.

Vallor (2012) also declares that social media can support friendships. Many social network sites allow additional information, and which encourage people to list hobbies, post photos, and interact with other individuals within the network (Cummings, 2012). Furthermore, social network sites help individuals to manage contacts beyond traditional software like outlook, and they also help incorporate visual information such as pictures of contacts (Cummings, 2012); hence, the online social media offers a precious function of recombining efficiently with friends in the past (Vallor, 2012). To conclude, it is true that these sites help participants perceiving more sense of social value and connection; also, social network sites help reinforce participant’s desire to maintain their friendships (Vallor, 2012).

As online social networking sites as a new media technology comes out in our society, individuals have more opportunity than ever before to present themselves in public by using them. These sites allow users to make self-presentation by creating their own profile pictures, personal information, photos, videos, and their activities. Impression management is related to social networking sites use because individuals tend to develop different self-presentation depending on the audiences online. From those studies we were discussed, people tend to behave favorable to their audiences. 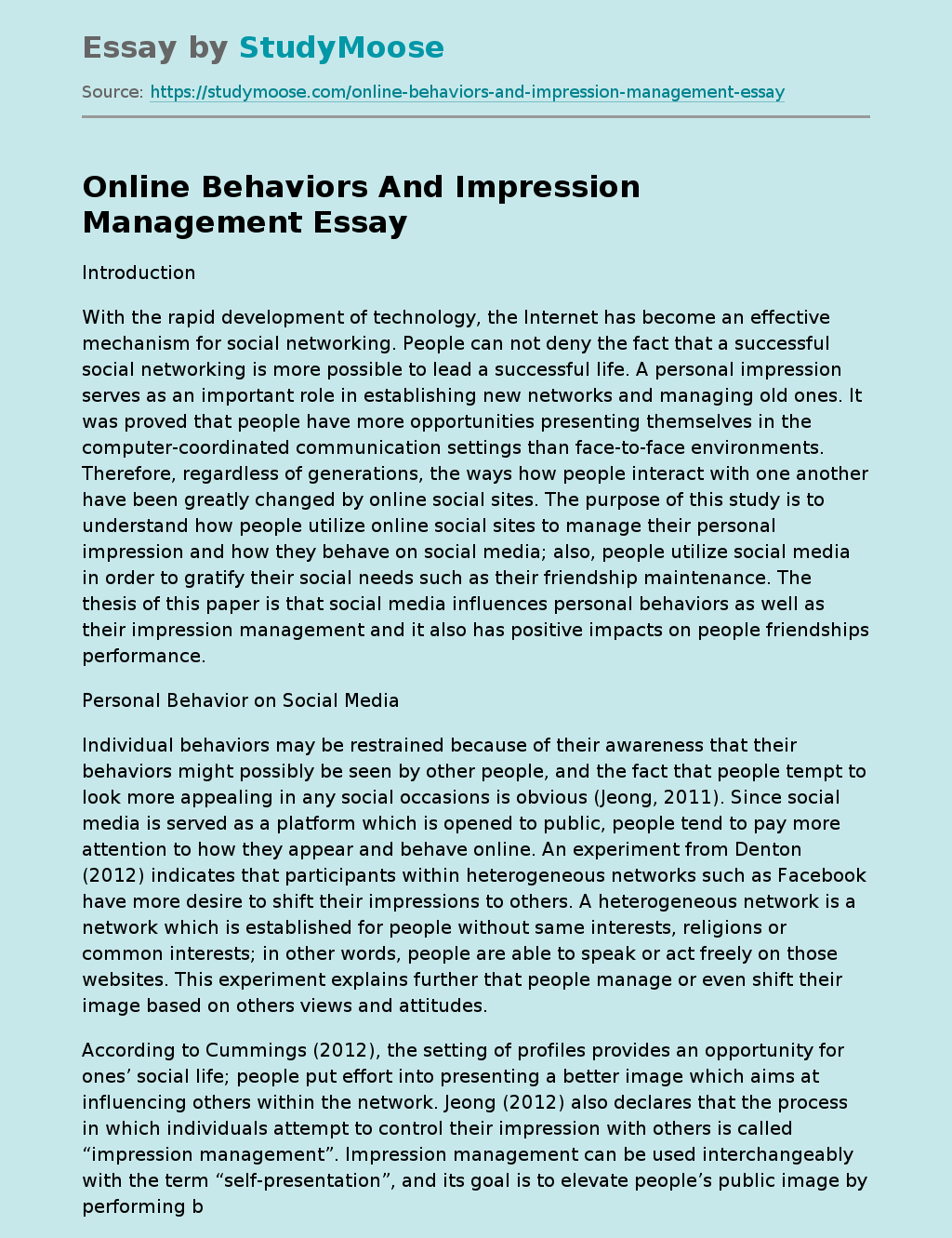