First Impression is always not right

First, opponents of this view tend to pay a lot of attention to peoples looks and appearance.

Don't use plagiarized sources. Get your custom essay on
“ First Impression is always not right ”
Get custom paper
NEW! smart matching with writer

They judge people by the kind of cloth they wear, the body composition they have, the color of their skin and so on. These opponents base their judgments about a person solely on these characteristics without considering the persons educational, intellectual, and financial background. For example, employers mostly judge a person based on his first impression before they consider if they will hire him or not. If a person appears in a job interview looking crabby with a lot of “Tattoos”, it is assumed that the person has bad morals and would not be a perfect fit for the job.

Second, opponents also claim that a true judgment can only be made when you don’t know somebody and you see him for the first time. They believe that people are most likely to be themselves on their first meet thus the way they communicate and act. Opponents think the kind of words a person uses in his conversation can easily conclude who that person is.

For example if a person communicates and uses the “F” word his conversation, he is seen as someone full of profane words.

Despite all these facts which may or may not be true about an individual, I argue that in order to have a fair perception about a person, one must take time to get to know the persons character and their reason for doing one thing over the other rather than just judging them based on their first impression. The way someone presents himself doesn’t always suit his personality and show who they are.

Unfortunately one’s presentation is the first thing that others see, and the first thing that people are judged on. The person might be in a bad mood, angry or may be shy. For instance, if somebody had a fight with her husband before an encounter with somebody, the person might not be in his best of mood or he might not be himself. As a result of this, it will be unfair to judge the person based on first impression.

In conclusion, even though first impression is sometimes important in our day to day lives but in my opinion, first impression is usually wrong and is often the worst means of judging a person because it’s not until you get to really know a person, you are better equipped to understand what kind person they truly are, and really know the individual based on real values, rather than their first impression, or “book cover”.

First Impression is always not right. (2016, Aug 08). Retrieved from https://studymoose.com/first-impression-is-always-not-right-essay 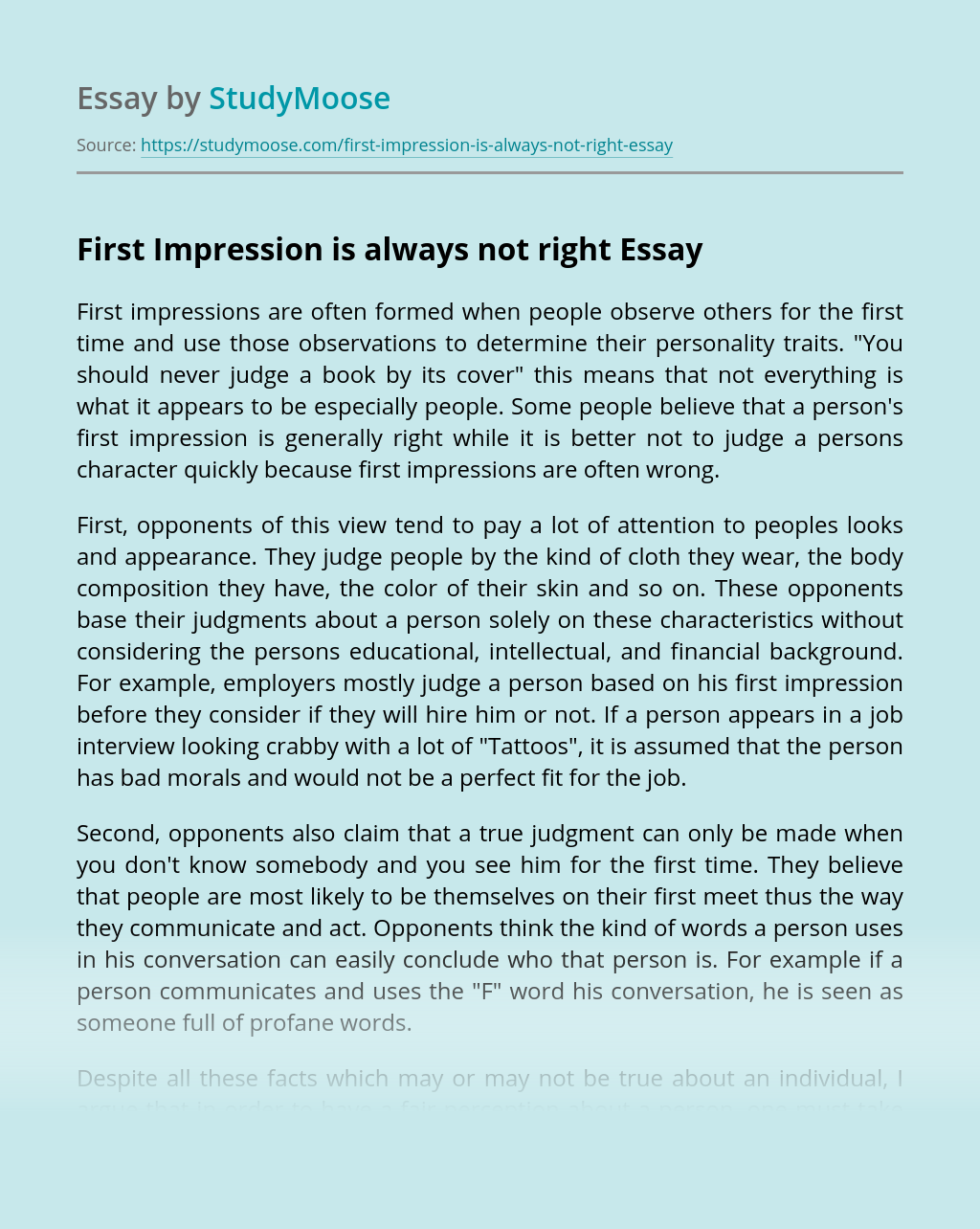