Is punishment always the right solutions to stop crime?

Punishments are meted out for three reasons – deterrence, retributivism, and incapacitation. The first, deterrence seeks to prevent future wrong doing. Retributivism is linked to notions of justice where crime must be met with an appropriate punishment. The last, incapacitation, seeks to protect society at large from criminals. This essay will examine whether punishment is always the right solution to stop crime, in light of the reasons for dishing out punishment to criminals. From the perspective of justice, punishment is the right solution to stop crime, as justice must be upheld in society.

Don't use plagiarized sources. Get your custom essay on
“ Is punishment always the right solutions to stop crime? ”
Get custom paper
NEW! smart matching with writer

However, from a more pragmatic point of view, punishment may not always be the right way to stop crime as it is often ineffective. Instead of just meting out punishment, the right solutions should focus on educating and reforming the offenders as well as educating the general public for the sake of a better society in the future.

From a practical perspective, punishment is not always the right way to stop crime as its deterrence effect is limited.

For the offenders, deterrence presents a threat of negative consequences to prevent offenders from engaging in criminal activity in the future; for the public, deterrence send a message to the general population to show that if one engages in criminal activity, there will be severe consequences. The assumption is that human beings are rational to weigh the benefits and loses of committing a crime. It might seem that the prospect of receiving a death sentence would deter murderers from committing such offences.

However, many studies on deterrence and the death penalty do not support this idea. The deterrence theory is not always applicable to all the cases, especially for violent. This is because most of the time when the offenders commit violent crimes, their criminal intent overshadows their ability to think rationally of the consequences of their wrongful act. For instance, terrorists are willing to sacrifice their lives to commit the crime, so even the most severe punishment death penalty does not serve as a deterrence for them. Also, a recent study published in the Journal of Criminal Law and Criminology reported that 88% of the country’s top criminologists surveyed do not believe the death penalty acts as a deterrent to homicide.

These statistics all shows that the deterrence effect of the punishment cannot always erase people’s intent of committing crime. As long as offenders are willing to take the consequences, the deterrence effect does not work on them. In contrast, the alternative of civic education, can help erase people’s intent of committing the crime. Unlike the deterrence effect, it has an edifying effect. With implanting the right positive values, the potential offenders would learn how to find alternative methods to release their anger to someone or to distract themselves from committing the crime. In this way, their negative intent can be erased and result in stopping the crime. Therefore, in my opinion, the civic education is more effective than punishment and it should be right solutions to stop the crime.

While in many cases, punishment metes out the appropriate justices, this is not true in all the cases. Sometimes, punishment may be blind to the causes of the crime and the circumstances of the criminal. The result is that punishment is not always the right method to stop the crime. Retributivism is a form of justice, whereby when an offender breaks a law, they are required to forfeit something in return. It is based on the principle of lex talionis: “An eye for an eye, a life for a life”, which states that whatever crime carried out will be punished proportionally. Another purpose of retributivism is to bring the closure for the victims for a short term, however, this only brings short term benefits for victims. In the long run, the retributivism does not serve to solve the real problems of the offenders. There are many cases that criminals may be wrongfully accused and sentenced to death. Cases like Li Yan, a Chinese woman who killed her abusive husband after 4 months of brutal domestic violence was sentenced to death. However, her action can be regarded as self-defense.

Hence, Amnesty International East Asia has tried to call for a reversal of the sentence. The real problem behind this crime is the lack of protection of women from the domestic violence in China. However, the judgment only focused on how Li Yan should give her life for a life. The punishment actually fails to address the fundamental causes of crimes and fails to do true justice, given that the criminal has sympathetic circumstances. In many cases, offenders committing crimes may due to some reluctant difficulties or they need survive in a harsh conditions. Therefore, instead of just meting out the punishment blindly, it is more important to ensure that true justice is done, such that criminals are not wrongfully convicted. This can be done by solving the social issues behind the crime and it is a more proper solution to stop the crime.

Incarcerating dangerous people to get them off the street and remove them from society helps prevent future harm by these criminals. Imprisonment punishes people by removing their right to personal liberty. However, the incapacitation effect does not serve to educate and reform the offenders. Once the offenders are released from prison, they may easily commit the crime again. Jon Venables, 31, was released from jail just over 3 years ago, but was soon was sent back to prison for distributing child pornography. When he was ten years old, he served 8 years for killing two-year-old kid called James Bulger. James’s parents were furious with the decision to release such a danger person as they believe it is only a matter of time before he commits another crime against a child. There are many offenders like Jon Venables who always repeat the same crimes. This shows that incarcerating the offender is not able to reform him into a good person. Solutions should achieve the purpose of educating and reforming the offender on top of imposing a penalty for their wrong doings so as to stop him recommitting the crime. The incapacitation effect of the punishment clearly fails to serve this purpose.

Many offenders start getting into their criminal habits since young. The lack of correction from their parents or school indulges their wrongfulness and results in the difficulties of reforming them after they are grown up. Therefore, punishment is not always the right solutions to stop crime as it does not change or reform offenders’ habits and concepts. Compare to civic education, it is clearly far more efficient for stop the crime as it help form the good habits and moral concepts in people. Moral education enlightens the general public’s sense of justice. Implanting positive values in youth is the best way to prevent crimes as foster the good characters and habits need to start cultivating from childhood. The punishment is essential for society to function. We sleep well at night because criminals are being locked up and punished, and victims feel that they have achieved redress for the wrong suffered.

A survey in 2005 shows that 95% of Singaporeans feel that death penalty should stay as it increases the sense of security. Hence, while it is true that sometimes criminals are wrongfully convicted, and that they may not be deterred or reformed, we do need a system of punishments in place due to our notion of justice. We cannot completely adopt an educational or rehabilitative approach. In conclusion, while punishments can be the right way to stop crimes (at least in terms of justice and how punishments are a reflection of the moral code of society), the effectiveness of punishments can be limited, hence perhaps it should be implemented in conjunction with other approaches.

Is punishment always the right solutions to stop crime?. (2016, Feb 26). Retrieved from https://studymoose.com/is-punishment-always-the-right-solutions-to-stop-crime-essay 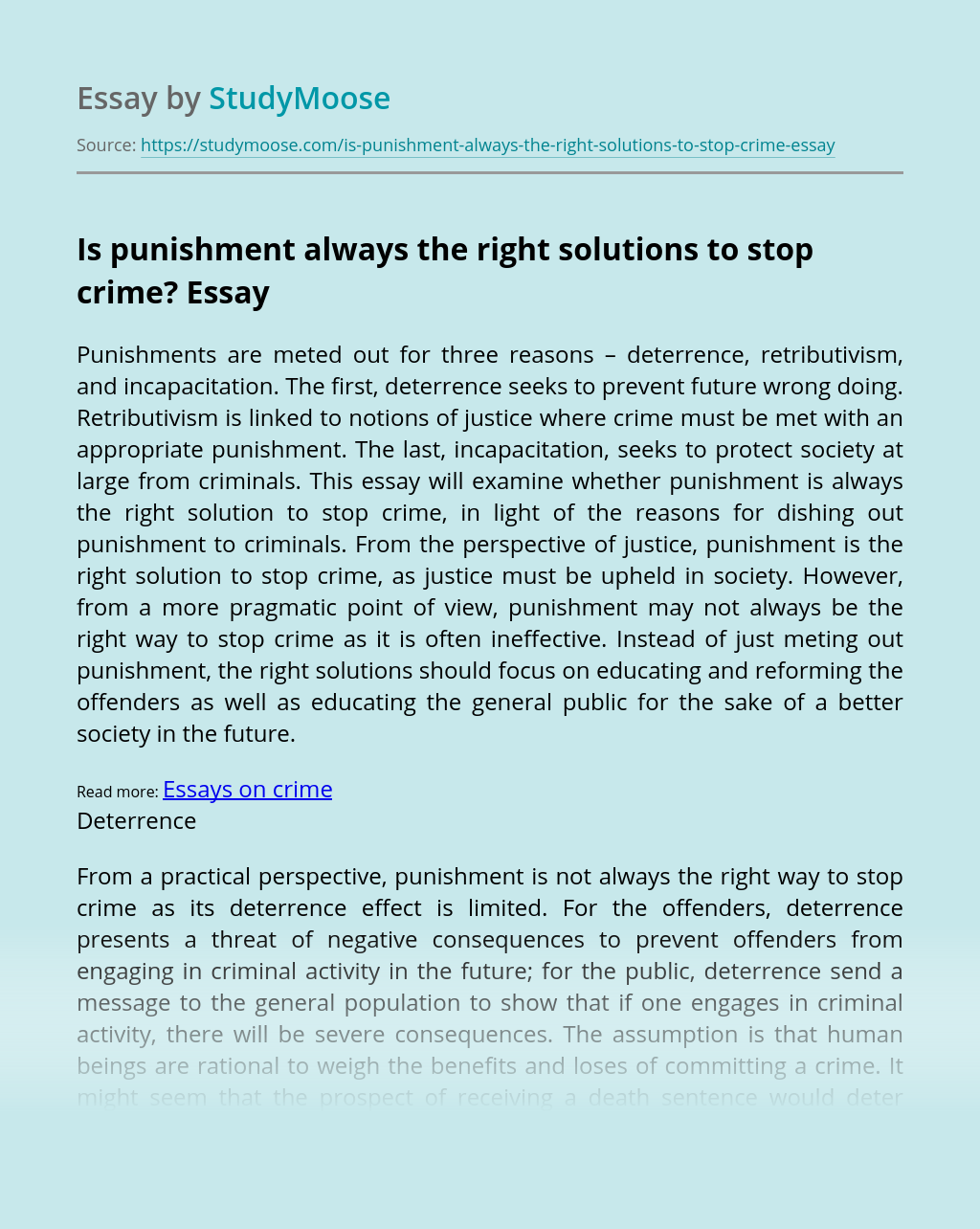