On Being Sane in Insane Places

Have you ever been in a confrontation with someone where they ended with calling you a lunatic, crazy, or insane? It does not feel too great. But at least you know you are sane, and to everyone else around you, you seem “normal.” Can you walk down the street and visibly see a difference between a sane and insane person? There are some people however that are permanently labelled as “abnormal” or “insane.” These people are diagnosed as “mentally ill” and are forever stigmatized and in some cases, dehumanized because of such labeling.

Don't use plagiarized sources. Get your custom essay on
“ On Being Sane in Insane Places ”
Get custom paper
NEW! smart matching with writer

Is it easy to distinguish the sane from the insane, or is it in fact the environment and contexts in which observers find these people? David L. Rosenhan formulated an experiment to investigate if psychiatrists could identify the difference between people who are mentally ill and those who are not. According to Rosenhan, “there are a great deal of conflicting data on the reliability, utility, and meaning of such terms as “sanity,” “insanity”… normality and abnormality are not universal” (Rosenhan, 1973, pg.

310). Rosenhan formed a group of 8 people who attempt to gain admission to 12 different hospitals across the United States.

All of the summaries were “unintentionally distorted by the staff to achieve consistency with a popular theory of the dynamics of schizophrenic reaction” (pg.316). Each psuedopatient upon discharge was reported as in remission, not cured, which perpetuates the negative label. These ascribed labels are permanent, and puts the diagnosed person at a disadvantage forever. People diagnosed as mentally ill are treated differently, in most cases they are treated as if their thoughts and opinions cannot be trusted or taken seriously. This is not fair, nor is it accurate. There is an “enormous overlap in the behaviors of the sane and the insane”(pg.318). The sane are not always sane, similarly, “the insane are not always insane”(pg.318).

While reading this article, I was reminded about the homeless, and that many people assume that just because they are homeless, they are likely to have a mental illness. Now I see why many people assume this; the reason is the environment and contexts that civilians see these homeless people in. It is possible that some of these people are mentally ill, but it is more likely that they are in their position because of other reasons. From a sociological perspective, this experiment highlights the conflict perspective. In class, we have discussed how power is the core of all social relationships, all social systems feature a superordinate group and a subordinate group. In mental institutions, as well as in the public, conflict perspective is conveyed via sane people discriminating the allegedly insane people. Psychiatrists, nurses, and even civilians are above the mentally ill, because they are “sane” while the “insane” are incapable of having valid opinions. Power is scarce, and everyone wants some of it, and unfortunately this permanent label is debilitating for the person who is marked with it, leaving them with little hope of upward mobility in our society.

On Being Sane in Insane Places. (2016, Feb 26). Retrieved from https://studymoose.com/on-being-sane-in-insane-places-essay 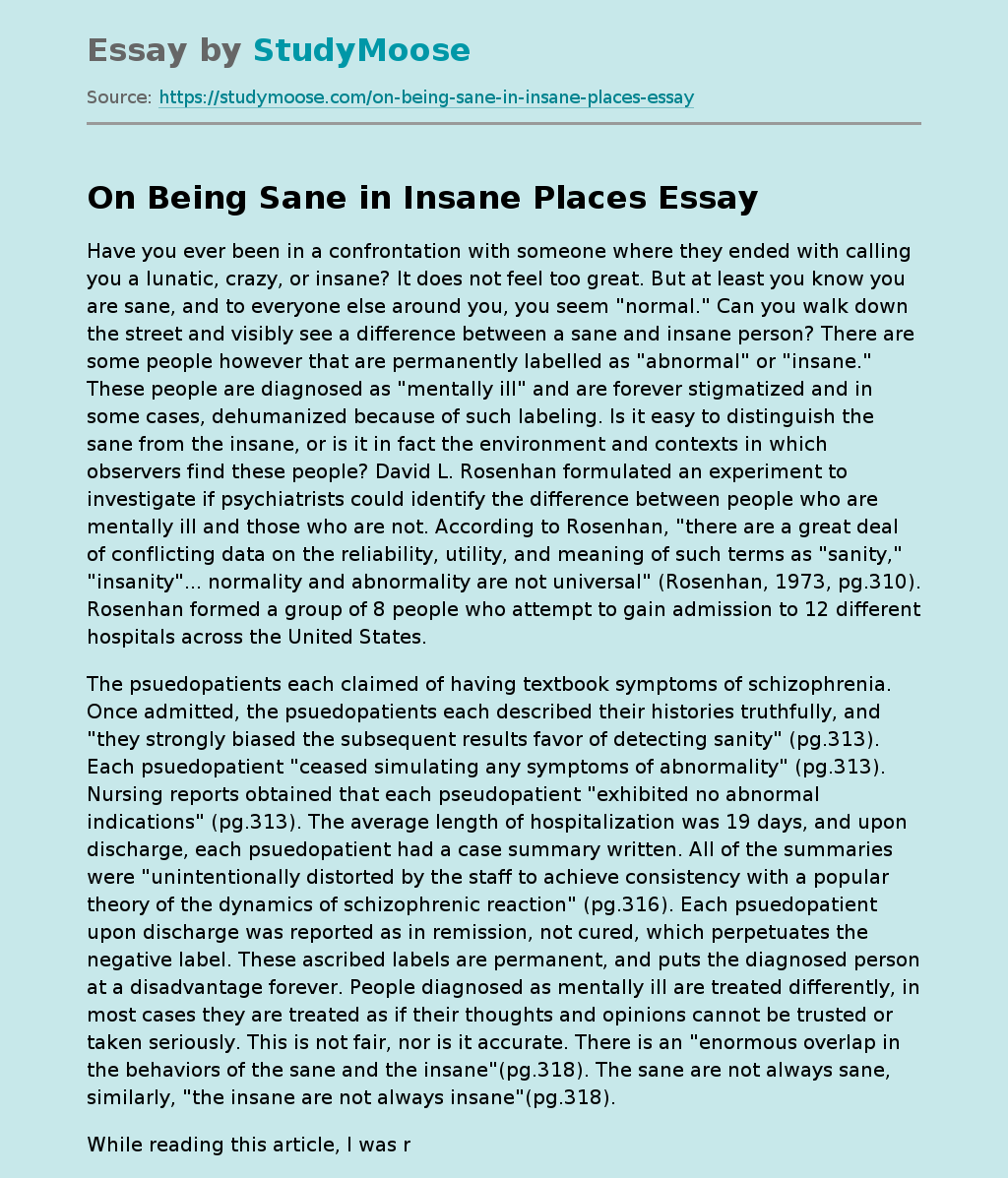