Of Mice and Men: The Failure of the American Dream

Thesis Statement : The novel Of Mice and Men was John Steinbeck a message to the world of how the American Dream is dead and unattainable. The nation had seen one of the biggest spending sprees in the nineteen twenties and the following decade the results were crashing down on the nation. People were losing everything that they owned and starving. The American Dream is defined as “The American Dream is “that dream of a land in which life should be better and richer and fuller for everyone, with opportunity for each according to ability or achievement.

Turn in your highest-quality paper
Get a qualified writer to help you with
“ Of Mice and Men: The Failure of the American Dream ”
Get high-quality paper
NEW! AI matching with writer

(What Is the American Dream)

There are several definitions of the American Dream.

According to Merriam Webster’s “an American social ideal that stresses egalitarianism and especially material prosperity; also: the prosperity or life that is the realization of this ideal. ” (Merriam Webster). The other part of that materialistic idea is that if one works hard enough, he/she can achieve absolutely anything. George and Lennie have a dream that completely embodies the concept of the American Dream. They are two men who are migrant workers during the Great Depression who have a dream of owning their own farm.

The actual ownership of the farm is only a small part of the dream. The fact that they will not be owned by another person is the allure of the dream. All kin’s a vegetable in the garden, and if we want a little whisky we can sell a few eggs or something, or some milk. We’d jus’ live there. We’d belong there. There wouldn’t be no more runnin’ round the country and gettin’ fed by a Jap cook. No, sir, we’d have our own place where we belonged and not sleep in no bunk house. (Steinbeck p. 63)

Because of their situation of being migrant workers, every aspect of their lives were dictated by their boss. Their need for money to survive, set them up for ownership as if they were slaves. George realized this more than Lennie. Lennie brought innocence to the dream. He wanted nothing more than to tend the rabbits because petting soft things brought him pleasure. He did not care about materialism or having control of his life. Pleasure of the moment was his goal for life and the American Dream took on its purest form through him. They remind themselves daily of this dream.

Lennie begs for George to tell him the story even though he knows it as if hearing it will make it so. George tells it as if each time he tells it the dream will become more and more real. Yet they are chasing an illusion. The characters have survived in the world so far because of their belief that the American Dream is alive and well. George and Lennie cannot imagine that their hard work will not pay off in the end. Society had told children for generations that hard work would take an individual to the top of society and many times it did.

Then came the Great Depression and everything changed. People worked hard and they did what they thought was right, but at that time it did not take them anywhere but backward. George and Lennie try to save, but it takes every dime to survive. Once they meet Candy, who offers to add money to the cause, they know that with the money they have coming, they will be able to have their dream, but just as it was time to make their purchase, tragedy strikes. Their work has gotten them nowhere. It is apparent throughout the novel that the dream is not attainable.

From the incident in weed to the killing of the puppy, everything that George and Lennie do ends up becoming a disaster. It is obvious that the dream of the farm will be as well. As George says: “-I think I knowed from the very first. I think I knowed we’d never do her. He usta like to hear about it so much I got to thinking maybe we would” (103). The unattainable American Dream is not limited to George and Lennie and that is symbolic that most people will not attain it. There are other characters who also have their American Dream crushed. Curly’s wife had a dream of fame and fortune.

She also wants to be loved. She married a man who was to inherit his father’s farm and he seemed to want her, but after she marries him, she realizes that he only cares about himself. She does everything in her power to get his attention because of her need. He is jealous of other men, but not because of the love for his wife. Love, marriage, and producing a family is part of the American Dream and all Curly and his wife have is the legal part of the institution. The dream that she imagined did not materialize with her marriage and that left her lonely and seeking the attention of other men.

If I catch any one man, and he’s alone, I get along fine with him. But just let two of the guys get together an’ you won’t talk. Jus’ nothing but mad. You’re all scared of each other, that’s what. Ever’ one of you’s scared the rest is goin’ to get something on you” (85). Crooks wants his part of the American Dream where all men will be equal and he thinks that he gets close to this the night Lennie and Candy end up in his room and share the dream of the farm with him. It does not take long for him to have to face the reality that there is no equality in the world.

George and Lennie prove that the American Dream is unattainable. To obtain it one’s life would be perfect and there is no perfection in the world. There are always going to problems and hardships in life and this makes the dream just that; a dream. Of course the American Dream has become less of a reality in this country since the beginning of the Great Depression, but it was really just a fantasy from the start. There were always people who seemed to achieve it, yet underlying problems were always present. George and Lennie prove that problems will always come to the surface.

Of Mice and Men: The Failure of the American Dream. (2016, Oct 25). Retrieved from https://studymoose.com/of-mice-and-men-the-failure-of-the-american-dream-essay 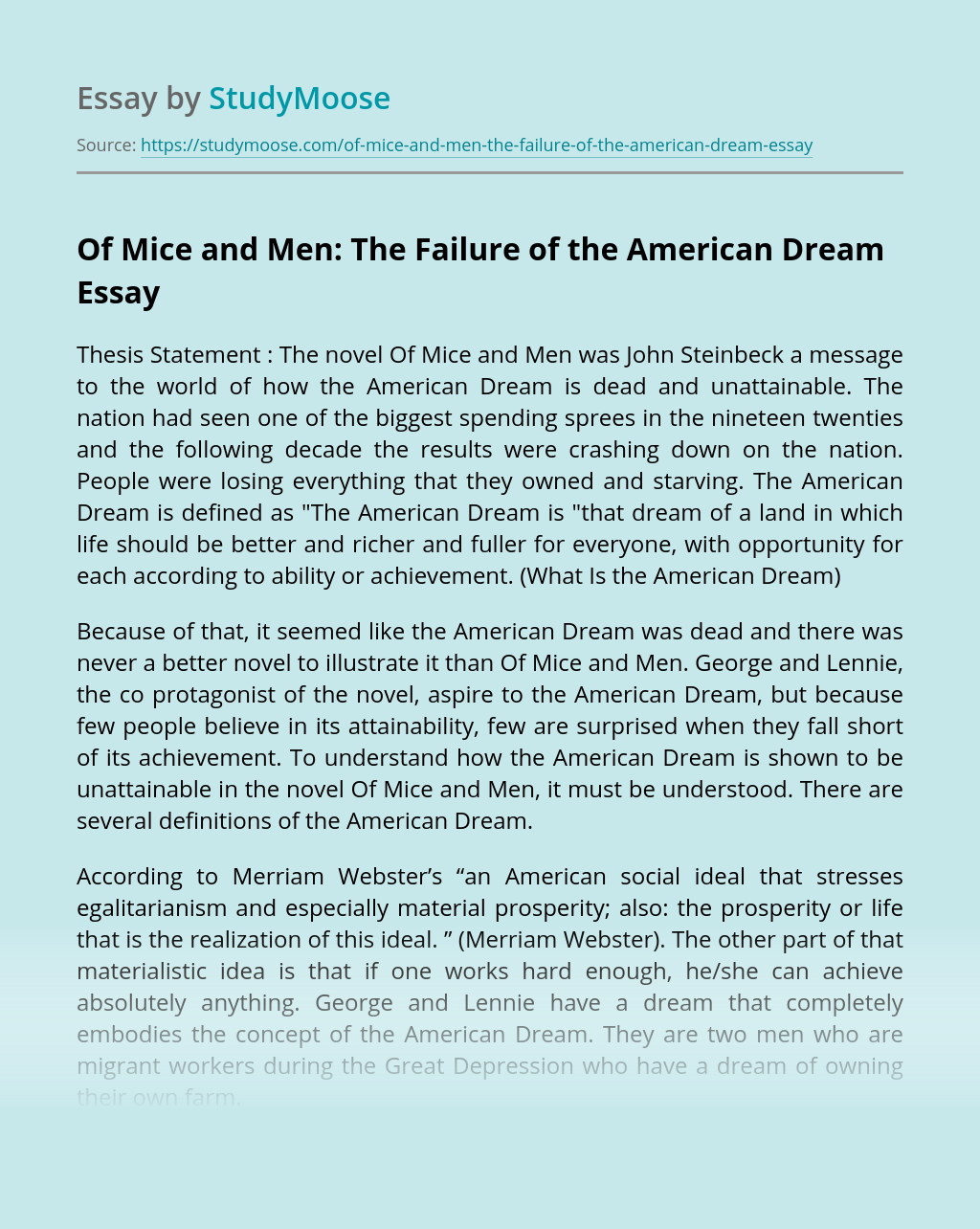 Turn in your highest-quality paper
Get a qualified writer to help you with
“ Of Mice and Men: The Failure of the American Dream ”
Get high-quality paper
Helping students since 2015
Stay Safe, Stay Original