From sea to shining sea, America has always been a country dependant on its coastal waters. We use the oceans and the abundant resources found in them for everything from physical exercise, food, and medicines, to a place to dump our garbage, dispose of toxic chemicals, and to travel to far off destinations. The oceans provide much for us, and without them, life on Earth would not be sustainable. The oceans are a vital resource for humankind, and sadly, we have put them in immediate danger.

Don't use plagiarized sources. Get your custom essay on
“ Oceans Act ”
Get custom paper
NEW! smart matching with writer

The majority of the population of the United States lives in coastal regions.

Due to this, marine-related industries, such as fishing and shipping, play a significant role in our nation’s economy. Unfortunately, the fishing business in the United States has dwindled. Overfishing has caused the collapse of New England’s cod, flounder, and haddock fisheries. The Gulf of Mexico has what is known as a “dead zone”, (Report of the Committee on Commerce, Science, and Transportation S.

2327) which was likely caused by pollution from the Mississippi River. Pollution is another issue altogether…

Runoff from our farmlands and cities flows down our rivers into the Gulf of Mexico and contaminates the coastal areas of our southern states. Oil spills threaten our marine wildlife. Harmful algal blooms have taken over many underwater habitats. Overabundances of sediment and nitrogen from farms and factories upstream suffocate the water ecosystems of our lands. Without strict guidelines and stream-lined regulations set up to properly control our pollution problem, humans will, ultimately, destroy the oceans.

The need for urgent action to protect our oceans and waterways has never been greater.

Although people have attempted to investigate and lay down the groundwork for improving the condition of our oceans in the past, their attempts have not been enough. In 1966, Congress passed the Marine Resources and Engineering Development Act (Report of the Committee on Commerce, Science, and Transportation S. 2327), which was designed to lay out national objectives and programs regarding the oceans. Leading the commission was Dr. Julius A. Stratton, former president of the Massachusetts Institute of Technology.

With Dr. Stratton leading the way, along with advisors from congress including Senator Norris Cotton and Senator Warren Magnuson, the 1966 Act was a huge step forward for the country’s oceanic preservation efforts, yet for the next thirty years, it would be one of the only steps forward. The United States urgently needed to increase public awareness of the importance of the oceans to our nation. With that in mind, 1998 was declared the “International Year of the Ocean”. Spreading knowledge of the threats our oceans faced made it clear to Congress that we needed to take a second look at our ocean policies.

On August 7, 2000, President Bill Clinton released a statement upon signing the Oceans Act of 2000. In it, he stated that “the legislation would establish a Commission on Ocean Policy, to make recommendations to the President and to Congress for a coordinated and comprehensive national ocean policy. ” (Statement on Signing the Oceans Act of 2000) The Oceans Act itself was the law requiring the formation of a sixteen member commission, whose job was to research the issues regarding our coasts and waters and to present a detailed report on their findings, and any recommendations to solve the issues, to the President.

In September 2004, the Commission introduced their final report, “An Ocean Blueprint for the 21st Century”, and invited public comment on their findings. The report consisted of 212 recommendations for ocean policy. Members of the Alaska Oceans Program, American Littoral Society, Gulf Restoration Network, Natural Resources Defense Council, North Carolina Coastal Federation, People for Puget Sound, Sierra Club, and The Ocean Conservancy submitted their comments on the report.

Public Comment on Final Report: An Ocean Blueprint for the 21st Century: Pre-Publication Copy) Although there were a few changes that these groups did not agree with, the majority of the information provided in the report was met with vast approval, especially the call for the implementation of a National Ocean Council, to consolidate the numerous agencies involved in the welfare of our waterways. Since the publishing of “An Ocean Blueprint for the 21st Century”, President Bush called for a 13. percent increase in National Science Foundation funding for ocean sciences. (A Sea Change in National Ocean Policy? by Matt Villano) However, much of the funding promised to support the National Ocean Council has been delayed and pushed back, making it very difficult to move forward with the recommendations of the Ocean Commission. In February 2008, the Joint Ocean Commission Initiative, comprised of former members from the Pew Oceans Commission and the National Ocean Commission, assessed the nation’s progress in ocean policy throughout 2007.

The grade they presented was a “C”. Funding seems to be the largest issue our nation is facing in terms of moving forward more quickly with the recommendations from the Commission, yet, as Andy Solow, director of the WHOI Marine Policy Center says, “If enough people get involved politically and on a grass-roots level, we can make significant progress in some of these areas without it. (A Sea Change in National Ocean Policy? by Matt Villano) The future of our oceans, as well as our planet, is still up in the air. Unless our priorities change, and funding is found to implement the changes needed to improve the status of our oceans, we may find ourselves on the verge of extinction. 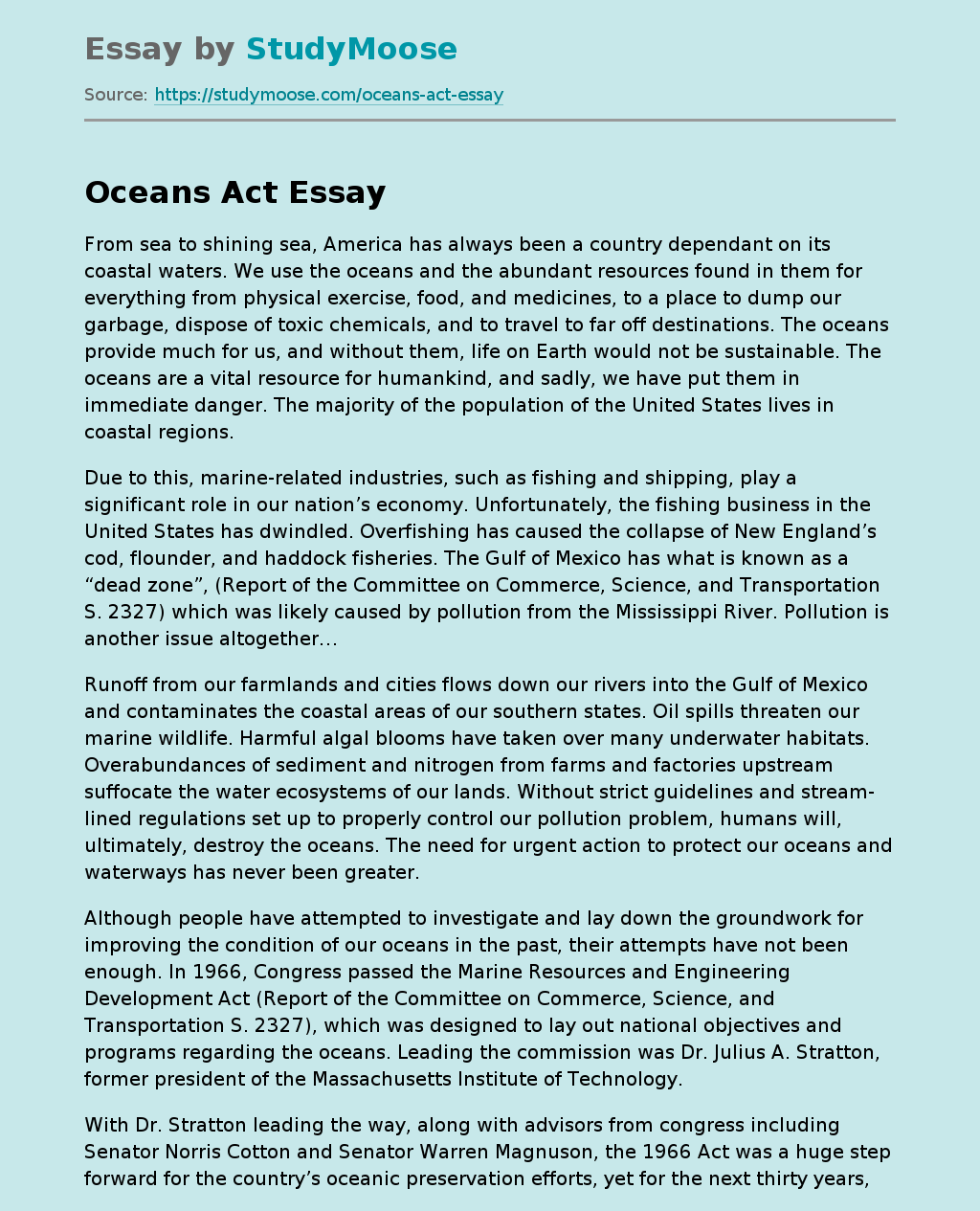