Triple threat Ethel Waters (October 31, 1896-September 1, 1977) amazing ability to entertain audiences with an unreal stage presence and spell bounding singing voice can be viewed by downloading clips of her acts. She was a Black heavy set entertainer coming from an unusually bad childhood. All of those experiences she was born into seemed to influence her to become stronger and handle the setbacks in her career and life in general. Her singing career began in 1917 on a Halloween night when she showed up for a costume party.

Her friends encouraged her to sing just for fun.

She did, astounding the audience with her entrancing singing style that was uniquely hers. After hearing her singing performances at the Halloween party, Lincoln Theatre in Baltimore Maryland immediately offered her a contract. After she left Lincoln Theatre, she performed at Harlem nightclubs, working till exhaustion. Later she joined a carnival, working nightly Vaudeville shows. After Vaudeville, she sang in another exclusive Harlem night club with Besse Smith.

Waters was fine with Smith’s request, because her unique style allowed her to sing multiple categories of music. “Ethel Waters was an innovative and terrifically influential singer, and she broke through racial barriers in movies, theater, nightclubs, radio, film, and television opening doors for everyone who came after her; She deserves much better to be remembered” (McCorkle, 1994). Ethel Waters Singing and Acting Style; Ethel Waters contributions setting her apart from other singers is that she sings Blues, Jazz, Showtunes, Pop, Dance music, Big Band, Broadway and Gospel.

Most of her songs are ballads, yet carry upbeat Jazz embellishments. Her voice does not even sound humanly possible. In the 1940’s there were no voice enhancing technology. She developed this unique style of vocal pronunciation by combining two different elements passed down from her mother and her grandmother. Her grandmother told her to keep a low soft, toned voice. Her mother encouraged aggressiveness, loudness, forceful vocal tones. She combined the two styles of vocal projections to sing unlimited types of music. Her voice is not loud or flashy, but filled with emotions, projecting her charisma to the audience.

After her Harlem night club acts, she sang “Oh Daddy. ” Oh Daddy resulted in Ethel Waters being the first Black female signed by Black Swan Records. The song immediately topped best selling charts. Because of popularity from the song, she toured with the Black Swan Jazz Masters and Fletcher Henderson. From this tour, she became noted for her dance shimmys and soft, soothing singing style. Her personality and spirituality came through as she created individual ways of interpreting lyrics of songs she sang. Bringing her own individualism to music carried over into movie roles she played.

Waters was cast in many television roles in 1920’s-30’s. She played many mammy roles. She always brought her own flair to the scripts, never interpreting roles exactly as written. “What was the most remarkable about Waters performance was how she reconstructed the mammy character into one that challenged stereotypes” (McElrath, no date). Producers not only seem to not mind her taking initiative to try something different, but were actually impressed by Waters own interpretations of the written scripts. Mammy characters were being portrayed as strong Black females, resembling lifetime heroes.

“Mamba’s Daughters” is the movie that popularized and brought recognition to Waters as an actress. At this time, Black actors had only non prominent roles available to them. In 1943, all of that was about to change. She took advantage of what was available to her, incorporated superb acting skills and stage presence, breaking limiting traditions. Today, Waters is greatly appreciated by many Black female singers, dancers and actresses for opening doors for them. Cabin in the Sky; Cabin in the Sky was first released as an MGM Broadway musical in 1940.

The Cabin in the Sky was a story about a man who was murdered because he could not repay his gambling debts. He has only a few months to save his soul before he can enter into heaven. In 1943, the film version of Cabin in the Sky was released, being the very first production to hire an all African American cast. This was the show that was the breaking point, allowing Black actors to play significant roles, eventually making them eligible to be nominated and receive awards. In these times, it was a financial risk to cast an all Black production.

Everytime a new movie, musical, video or album is made, the production company invest plenty of money, hoping it will be a success with the public. MGM was a big enough and financially stable enough company to take the financial risk. It was also the changing of times. People wanted different entertainment, something extraordinary, something they never seen before. Waters, once again changed up her script she played as Petuna. This time, she added a very shocking, unexpected dimension to the role. Besides breaking racial barriers, Cabin in the Sky threw out all rules of ethic modesty.

Waters stunned everyone by adding a a sexy, suggestive musical dance style influence to her character, she starred as a female singing and dancing while taking a bubble bath. In 1943, this was considered “past the limits. ” The show was a huge success so much that it was nominated for an award; the Academy Award for Best Original Song. The show was nominated for the song, “Happiness is a thing called Joe,” sung by Ella Fitzgerald. Cabin in the Sky made historical changes, had people talking endlessly about the show for years. For all these years, no one ever heard of it. It was recently released on DVD in 2006.

Declining Work for Ethel Waters; Even though she was a fabulous triple threat, an asset to any show, Waters quickly found herself unemployable. While theatre and music producers welcomed Waters changing up the roles she played to suit her individuality, there is one part of her that was not acceptable. All the producers complained about her bad tempered attitude. Usually, when something works, the producers will put up with most anything from actors. However, that phase is passing, because there is to many talented actors who will not cause problems. From 1942-1949, producers refused to cast her in any roles.

For a while, Cabin in the Sky was her last role. The producers had enough when her temper flared her co-worker, Lena Horne sprained her ankle. Waters went into a jealous rage claiming that Horne was getting far to much attention. In 1949, producers gave her another chance. She played another mammy role in “Pinky. ” Her exceptional performance in “Pinky” won her an award for Best Supporting Actress. (McElrath, no date). The Civil Rights Movement in the 50’s-60’s brought a change that did not help Waters. People felt her roles as mammy’s were degrading to Blacks, and showing them in a way that would not contribute to their respect.

When Waters was growing up, her career ambitions was to work for rich white people. She did not work for rich white people, but her roles where a Black woman working for other people. The Civil Rights Movement frowned upon Black actresses playing domestic roles. Although Ethel Waters achieved respect for Blacks, her accomplishments are all forgotten. She is remembered as an actress that promoted Black housekeepers. Many people think of her as someone who broke racial and other barriers in society. His Eye On The Sparrow; Waters Autobiography “The two great struggles in Waters life were poverty and racism.

But matching these were her two great strengths: an iron will and deep faith” (Anderson 2002). Waters spoke proudly of her spiritual faith, letting in be known her religious traditions is what gave her strength to overcoming obstacles and struggles. In 1951, Waters autobiography was published, named His Eye On the Sparrow. His Eye On the Sparrow, originally sung by two white men, Civillia Martin and Charles Gabriel, belongs to the gospel category. African American Ethel Waters were greatly inspired by lyrics of the song so much she used it for her intriguing autobiography.

She recognized the lyrics as a reflection of her own life, and a reminder as to where her amazing strength came from. “Waters was blessed, however, with a singing voice, and would work her way through the black vaudeville circuit to Broadway and into Hollywood. She was known as a singer of Jazz, Blues and show music, but also for her strong Christian faith-she sang spirituals and gospels on tour with Billy Graham” (Jones, 2005). According to her, success was not influenced on behavior of people surrounding her, her race or economic or disadvantaged background, but influenced by her beliefs.

“Why should I feel discouraged? Why should the shadows come…I sing because I’m happy; I sing because I am free” (Lyrics). The people surrounding her were disadvantaged, but she was strong and gifted. And she was Black! Those strong beliefs and sense of spirituality were all she needed for thriving success. “His eye is on the Sparrow, and I know he watches over me” (Lyrics). Fair or not, in those days people in positions to offer employment opportunities saw a Black person, and opinions regarding their abilities stopped right there. However, people like Ethel Waters changed all of that.

Today, music is surpassing limitations because of combining cultures and different styles of music. The book follows her life from being born illegitimately to an unloving, uncaring mother living in poverty conditions to her fame on Broadway. Conclusion; Although Ethel did not realize it at the time, she lived a life that was very interesting and fascinating to many people. She was in demand for many performances because she was a fluent Jazz and Blues female vocalists. However, she sung all types of music. She opens the new world that blues and pop music can be sung by one singer.

Her famous career began at a Halloween costume party, progressed to a professional theater, then Harlem Nightclubs, Vaudeville, eventually on television, and Broadway. Her acting career was just as successful, even with its ups and downs. Her religious beliefs and faith in God played significant roles providing her with inner strength making it possible to bring great entertainment across the screens and stages. Her autobiography, written just a few years before she died was based on a highly spiritual song played in sacred settings. Her accomplishments can be remembered in her movie Cabin in the Sky and her book, His Eye on the Sparrow. 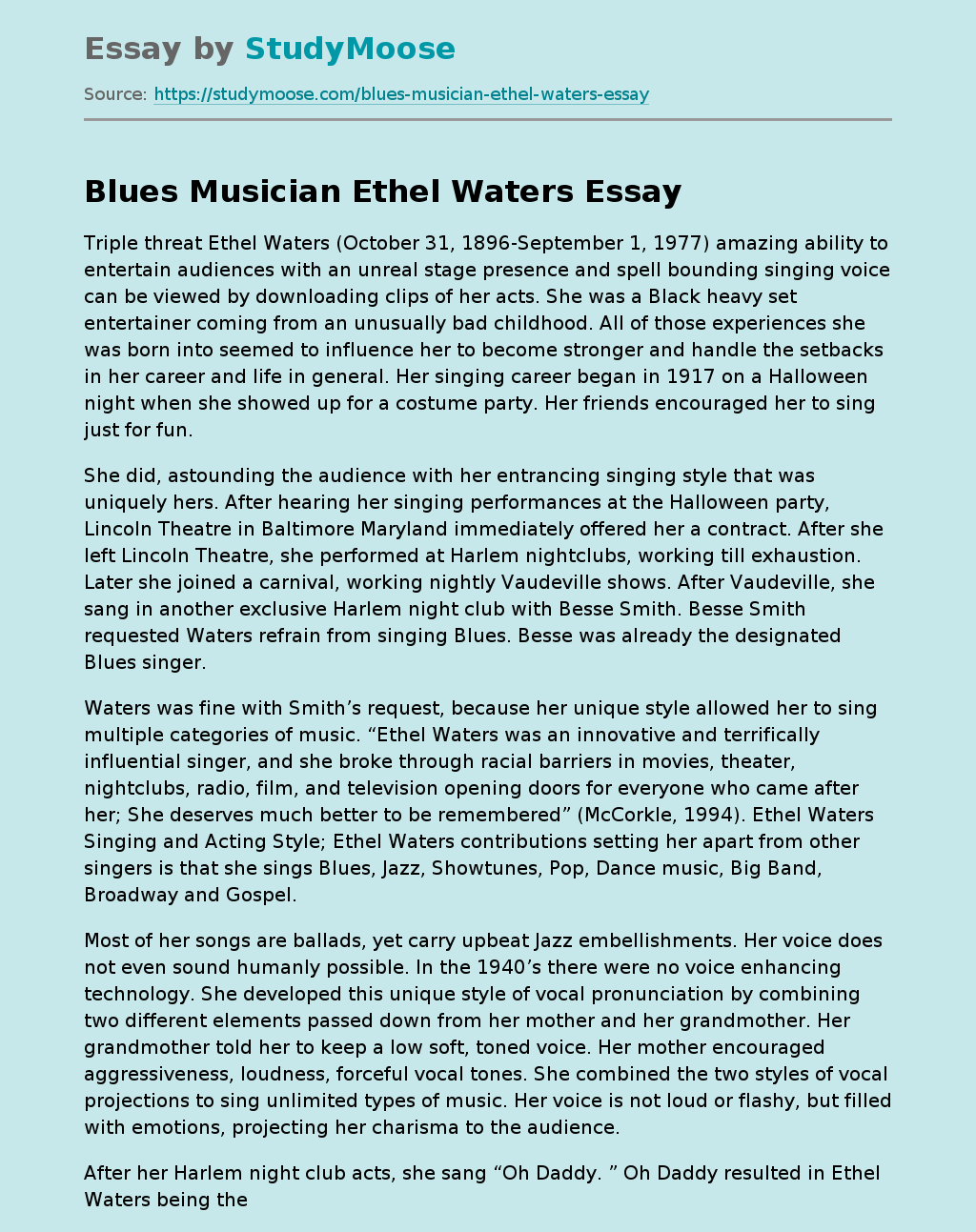