Emilio De Leon
Instructor Martin
January 31, 2018
Poisoned Waters Reaction Essay
When tasked to watch a film assigned by my science class about polluted water, I assumed it was a video I already had knowledge of. After watching the video and digesting everything I had just watched really opened my eyes. The crisis the world is experiencing with our water is bigger than any one person in power. It occurred to me that everything in that video has been an ongoing issue that has yet to be addressed in any country, until recently.

In the United States there has been little legislation just covering the bare minimum to protect our waters.
The importance of protecting Chesapeake Bay, which has been the main focal point of attempting to address the ongoing problem that has contaminated the water. Watching the video and learning about how the ecosystem is suffering, from frogs with three legs and fish who are going belly up. It is of great concern that these few issues get addressed because it could soon start effecting humans.

Chesapeake Bay is in trouble, and is scarce of most wildlife. The video interviews a fisherman where he explains his crab catches have been down 25% than that of 50 years ago. He has seen the diminish of wildlife and decline in the fisheries. Losing oysters has cost the economy millions of dollars in the economy. This is a byproduct from man made pollution that has harmed aquatic life. Scientist has deemed areas that are vacant as dead zones.

Dead zones are areas in the bay that are low in oxygen and inhabitable for wildlife. This has caused crabs and fish to die from the pollution in the water. Every year the Chesapeake Bay has to be closed, as a result from the pollution in the water. This abundance of information was hard for me to digest, mainly because there is little to none on making this issue go mainstream. In the time we live in today, it is very easy to make things go viral and make notice of something. The fact that this tragedy is happening in our own backyard is worrisome.
The films overall point of view was creating awareness through facts and firsthand interviews with people who have been in the industry for decades. The film interviews environmental scientists and fishermen who explain the issues that are harming the ecosystem through pollution. The main purpose of this film is to educated the viewer and audience of the need to create new legislation and hold those accountable for polluting our waterways. This film is very powerful in the message it conveys. It is ultimately a cry for help in protecting our water, a vital resource needed for the cycle of life and nature.
The sources that were used in this film to communicate the main point were carefully picked out. The film uses scientist like marine biologist and environmental specialists to explain what is going on in our waterways. The film also carefully chooses fisherman and farmers who are well invested in their craft to explain what it is their experiencing in their filed of work. Some of the historians that speak in the film speak about first hand knowledge of the state they lived in. For example one historian explains how there was once a rebellion exploding on the streets, calling for addressing our water and pollution. This ultimately led to President Nixon creating the Environmental Protection Agency. The creating of this new agency gave Americans relief and hope that the government was taking a stand on protecting our environment. It soon proved to be the bare minimum protection given towards the environment with little regulation on corporations. One historian stated that the government just does not care enough about the environment, until it is too late.
I believe that more sources were more effective in convincing others. For example, the interview with the chicken farmer who was voluntarily answering questions from the narrator borough great insight on what it is like to be on these mass farms. The amount of animals that are contracted to be raised there by big corporations like Perdue and Tyson, show the amount of neglect towards the animals is shown. There has been much controversy relating that these business’ are not taking full responsibility from the animal manure that is a byproduct from the animals they have agreed to own. The farmers have been left to dispose of large amounts of animal manure and ultimately disposed incorrectly. Farmers are not capable of disposing mass amounts of animal manure without any error. The issue that arises is that the waste is entering our waterways and contaminating our rivers and lakes. Another one of the more effective source was the interview with the Perdue representative, who swept away the question when asked about the responsibility of collecting the animal waste and disposing it. The interview shows that these business’ want zero responsibility when there animals effect the ecosystem.
This film is consistent with what I have learned in the past. I had prior knowledge of how these big animal farms are being ran and regulated. The most valuable knowledge gained through this film was the awareness of the amount of pollution that is in our water here in the USA. What the government has implemented in cleaning the contaminated water is just a small victory in the battle in cleaning and regulating our water. Water has been an abundant natural resource in the USA and has been taken for granted for decades. Much of this water has since become contaminated and until the problem is contained, it will soon be a critical issue.
My overall reaction was shocking and awakening. It just strengthens the notion that water quality in our world has taken a back seat. Big business’ and the government have taken little to no action in addressing the on going problems that are impacting our water. I was taken back on learning that parts of the Chesapeake Bay has dead zones where aquatic animal life are dying, including crabs and fish who have gone belly up. This is an alarming problem that has effected not only the water quality but the economy. It showed that fisherman have noticed the decline in the amount of fish they have been able to catch. The wildlife in the bay are becoming non existent like the oyster, which is no longer found in the Chesapeake Bay. A few solutions that I would implement is more regulations on what these business’ and farms are disposing into the water. I would suggest that a new entity be created to investigate these business’ and take appropriate action when needed. It is now time to make these corporations accountable for the pollution that is harming the water. This film has brought awareness to viewers like myself who had no idea what was happening in our own backyard. When you think of water, most people do not associate the bad comes with it. The average American who has not taken the time to watch this film is left in the dark not knowing the amount of pollution that is in the waters in our country. 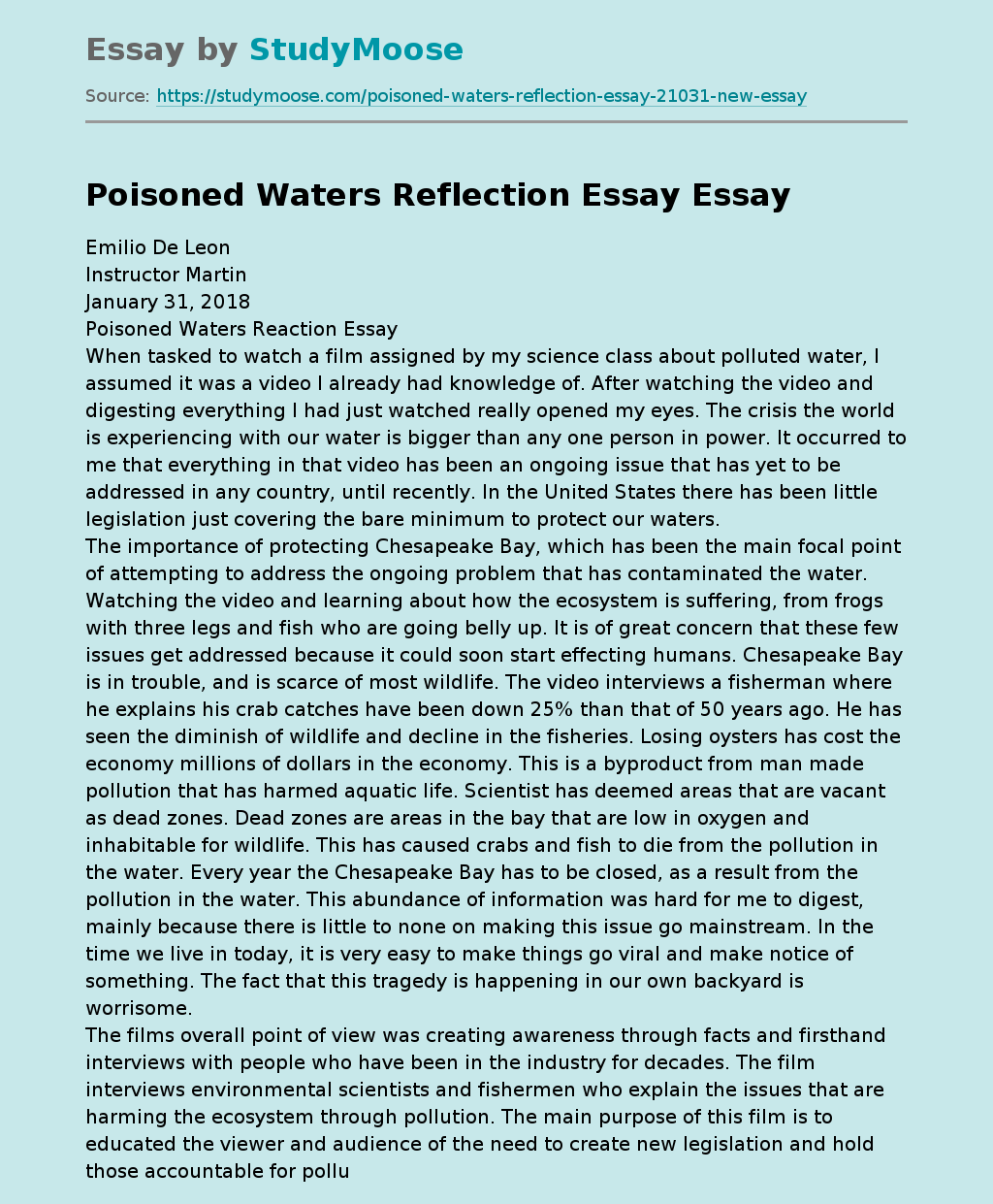