Don't use plagiarized sources. Get your custom essay on
“ Nowadays addiction is so common that everyone is more or less addicted ”
Get custom paper
NEW! smart matching with writer

In fact, I was taught to stay away from any video games because they would likely interfere with the school work. On Christmas Eve last year, after a tough exam week, I was relaxed, so I texted a classmate asking what she was doing. She invited me to play a popular multi-player mobile game called Unknown Battleground. I also downloaded the game, with the intention only to entertain for a few hours. However, it began to spiral out of control from that moment. At first, I just wanted to relax and finish the game, but in the first round, I was immersed in the graphics and sound effects, and I learned to use weapons and communicate with my teammates.

I started the second round right away, continuing to improve my skills and play with my teammates. Within a few hours of playing, I began to become a master. On the first day of playing Unknown Battlegrounds, I played for five hours straight. During the next few days, I played the game for many hours and I played whenever I could. By the end of the first week, I started to pay more attention to my rank, and I wanted to be better than my friends as we can see each other’s rank. I began to pay more attention to the tutorials found on the web and watched how experts play on the internet through live broadcasts. I would discuss the game with my friends and the game has become a topic to talk about among us. I gradually became extremely addicted to the game. I would get invitations from my friends to play or I would send invitation to others to form a team. It’s been said that it takes 21 days to develop a habit, but my addiction to the game seems to start from day one. It was out of control once I started playing. I was criticized by my mother for playing mobile games with my iPad from morning till night. I knew that I needed to quit playing the game and even uninstalled the game a few times, but soon the game was downloaded, and I began to play again. The loss of control has made me feel very distressed, and I could not to stop thinking about playing mobile games.To explain why I have been addicted, one of the reasons is that the mobile game keeps me from real life. As a matter of fact, with the development of internet, people are getting more distant from real life, and people do everything online these days, such as shopping, communicating, and conferencing. The mobile game made me enter another world which is not related to my real life. It is very easy to achieve victory and feel satisfied while playing. After winning the game, I can get great satisfaction, as if I were a hero, and after losing the game, I can immediately start another round without any burden. In the gaming world, I can enjoy myself without thinking about any academic work from the school. I can always chat with my teammates in the gaming world and never feel lonely. If I could not get along with a stranger in the game, I could just quit the game and start another round again. In real life, I am facing academic pressures and need to work hard to get better grades. I will feel depressed when my scores are lower than my classmates. In addition, I have the pressure to get along with people in real life. In the gaming world, it is totally different, and life is much easier. I can do whatever I want without any pressures and feel more satisfied at the same time. However, after being addicted to the game, I found that the communication with some of my friends and family, the outdoor activities that I used to enjoy such as hiking, and the interest in learning such as reading books, have all vanished and been replaced with time spent on mobile games. Another side effect of addiction is the distorted sense of time. A few hours would go by very fast in the gaming world as we were extremely focused and having fun at the same time. One day I estimated how many hours I have spent on the game from the first day to now, and the total is about 1000 hours. I thought I did not spend much time on the game, but in real life, I could have accomplished a lot with the 1000 hours. After finishing playing the game, I felt very lonely and dissatisfied sometimes, as I realized that I just wasted a number of hours achieving something that is completely useless in the real world. I soon realized that the game cannot bring me any satisfaction in real life for the long term and it makes me feel empty. I could have probably mastered some other skills if I had spent 1000 hours on that skill. At the minimum, I could have easily worked a few hundred hours for a part-time job and made a decent income if I did not play for 1000 hours. I found that I got nothing but a deeper desire to play more mobile games as I am more established in the gaming world and my gaming skill was improved a lot. The false impression that I did not play mobile games for that long is a serious side effect of addiction, and it affects the quality of the real life. I begin to regret spending so much time playing mobile games and wish I could better manage my time, even though it did not feel like much time was spent on mobile games. It is quite easy to get addicted, because it doesn’t take too much effort, and a false sense of satisfaction can soon be achieved. I have realized that I am addicted to the mobile games, which could have many unwanted effects such as loss of control, escaping from reality and distorted sense of time, but it is probably hard to quit. One of the methods is to try to shift my focus to something more meaningful, and hopefully my life will get back on track again.

Nowadays addiction is so common that everyone is more or less addicted. (2019, Aug 20). Retrieved from http://studymoose.com/nowadays-addiction-is-so-common-that-everyone-is-more-or-less-addicted-essay 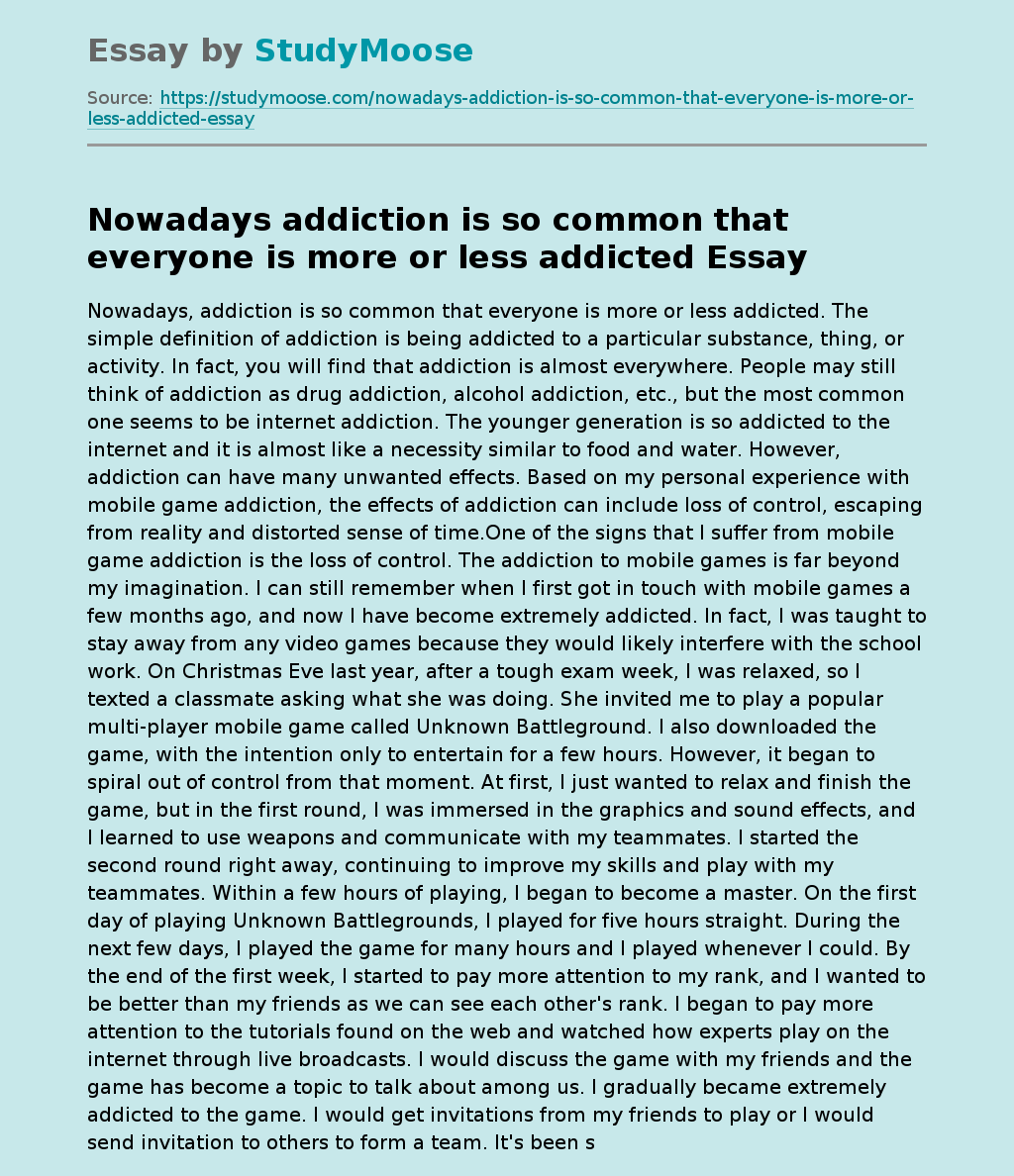