Notes on A Constable Calls by Seamas Heaney

Seamus Heaney tells us about a memory from his childhood. A policeman visits his family farm to take a record of the crops that Heaney’s father is growing. The description of the bicycle is our first indication that the policeman is not welcomed and that he is seen -by Heaney at least –as an intimidating, unpleasant figure. Everything in the description of the bike hints at this. The ‘fat black handlegrips’ sound ugly and unpleasant, and seem to suggest that the bicycle’s owner might be similarly unappealing.

The dynamo is ‘cockedback’, reminding us of the trigger of a gun. The pedals are ‘relieved / Of the boot of the law’, implying that the constable is a man whose presence causes pressure and discomfort. He represents ‘the law’ and is therefore disliked. At that time in Northern Ireland, most Catholics would have viewed the police as an oppressive force. The descriptions of the constable reinforce that idea.

The harsh ‘k’ and ‘g’ sounds in the opening stanzas emphasise the harshness of the authority the constable represents and they also create a sense of tension.

It is clear that the constable is not welcome in the Heaney home. His hat is on the floor: nobody has taken it from him or offered him a place to put it. Again, the physical description of the constable focuses on unattractive aspects of his appearance. His hair is ‘slightly sweating’ and marked by the cap he has been wearing. The idea of his oppressive presence is again picked up by the reference to the ledger (record book) being ‘heavy’.

The young Heaney is filled with fear as he watches the constable. He stares at his gun and remembers every detail of it in its holster. The tone of the poem is one of fear. Meanwhile, the constable continues to record the family’s crops. Heaney’s father answer’s the constable’s questions with curt, one word replies, showing how unwelcome both he and his interrogation are.

The young boy is terrified to hear his father lying about the crops. He knows that there is a line of turnips which his father has not admitted to, and in his horrified imagination, he sees his father –and maybe even himself –being taken to the barracks and thrown in a cell. The constable takes his leave, putting the ledger away. Heaney refers to it as the ‘domesday book’ because he is so terrified that his father will be judged and punished for his little lie about the turnips. This name for the ledger also reinforces the idea of the constable belonging to an oppressive force which holds the threat of violence over people like Heaney’s father. Of course, the young boy is grossly exaggerating the policeman’s power in this instance. To a small child, the lie about the turnips seems enormous, but in reality, nobody would be thrown in jail for such a minor offence, even if it were to be discovered. However, young Heaney’s emotions towards the constable reflect his father’s dislike and resentment of being held to account for his crops.

The constable looks at the young boy and says ‘goodbye’. This reminds us that the constable is, in reality, just a man. This is the only instance of his humanity. It is not likely that he wishes to appear threatening or intimidating, but that is how he is viewed by the Catholic community. He is seen as a representative of an unwelcome, despised, oppressive authority. Outside the window, the constable is for a moment just a shadow. There is something shadowy about the descriptions of him throughout the poem. We never learn any details about him as a person: what we learn of him is based on the images of menace and threat.

Notes on A Constable Calls by Seamas Heaney. (2016, Oct 19). Retrieved from http://studymoose.com/notes-on-a-constable-calls-by-seamas-heaney-essay 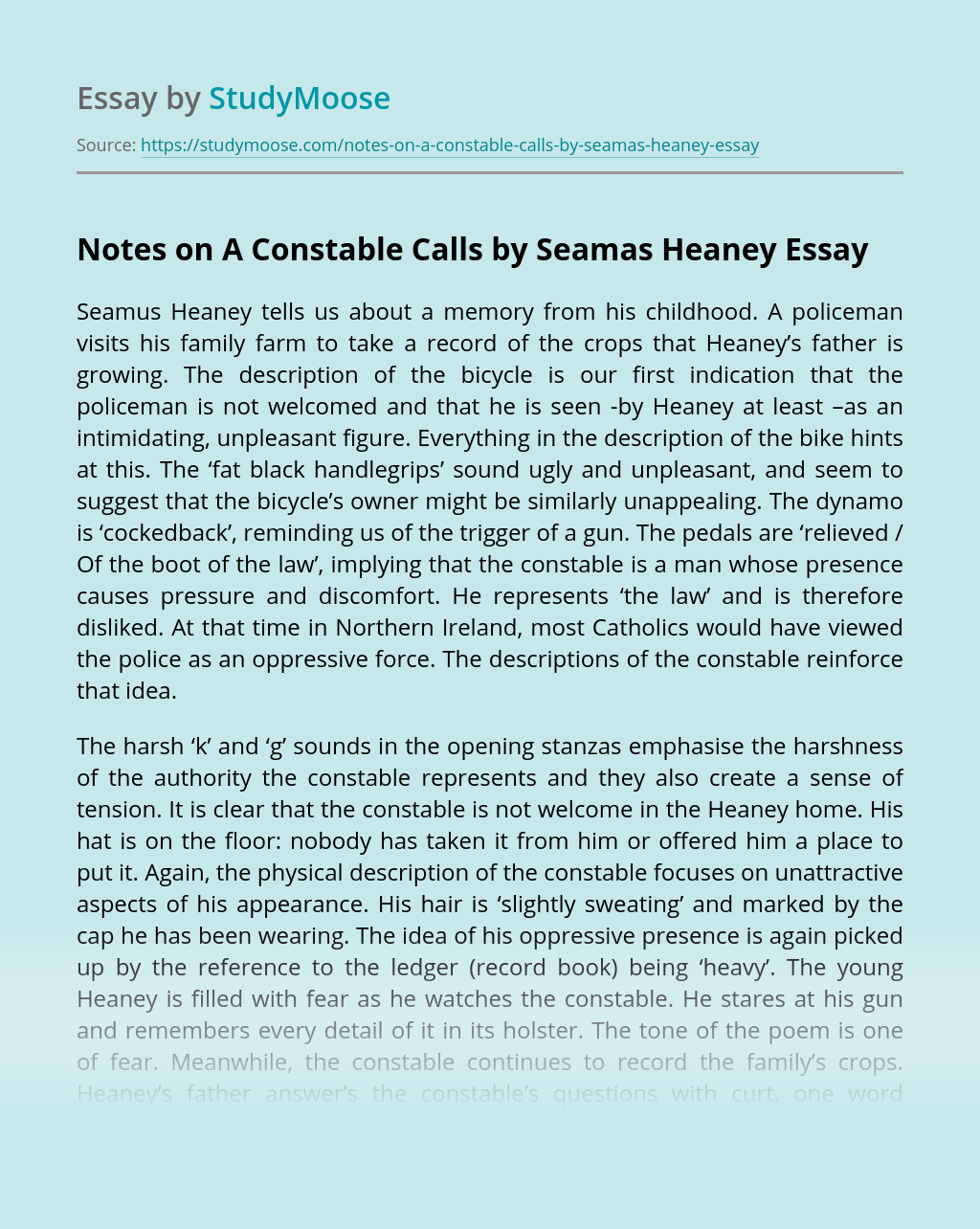 Don’t waste time
Get a verified writer to help you with Notes on A Constable Calls by Seamas Heaney
Hire verified writer
$35.80 for a 2-page paper
Stay Safe, Stay Original