From the first settlement founded in the 1600’s, the British colonies were a varied mix of communities that grew to distinct civilizations in the 17th and 18th centuries. Queen Elizabeth helped drive the colonization of Jamestown in 1607 and ultimately the creation of other Southern colonies to help Britain’s economy flourish. In contrast, James I, Elizabeth’s successor, spurred the settlement of the Northern colonies for religious reasons when he “vowed to purge England of all radical Protestant reformers” (Davidson, et al 85).

When the Pilgrims sailed the Mayflower in 1620, an error in navigation led them far north to New England, rather than the South. A second wave of Puritans led to the formation of the Massachusetts Bay colony and the growth of other Northern colonies. While the early settlers were all looking for new experiences, different types of people populated the Northern and Southern colonies. Although the two regions in the 17th and 18th centuries may appear to be similar on the surface, there are many obvious differences in economy, treatment of Natives, and stability, stemming from the reasons they were founded in the first place.

While the colonies differed in their economies and the reasons they were settled in the first place, they all benefited from “benign neglect” from Britain during much of the 17th and 18th centuries. Benign neglect was Britain’s policy of non-interference with the colonies (Davidson, et al 128). Britain was busy dealing with its own government issues and change in rulers and did not have the time to strictly administer the colonies.

Because of this, both the Northern and Southern colonies flourished economically and established a relatively stable way of life. In addition, the first Colonial settlers and their descendents shared a desire for a better life, whether it was for land, money, or religious freedom.

Without this benign neglect from Britain, the colonies may have never been able to prosper and set the stage for the new world the way they did. Despite a similar determination to thrive in a new world, the Northern and Southern colonies differed substantially in their economies. The Southern colonies included Virginia, Maryland, Georgia, and the Carolinas and were largely founded for profit. Because of the warm climate and fertile soil, the Southern colonies were perfect for the growth of staple crops, ranging from tobacco, rice, and sugar. A planter, “[John] Rolfe, had been obsessed with finding a crop that could be grown in Virginia and then sold for gain across the sea. When he succeeded by growing tobacco, other English followed his lead” (Davidson, et al 53). Tobacco growth was critical for the Southern economy to succeed. But, as these crops began to prosper and England demanded more, “many of Jamestown’s colonists had little taste for labor” (Davidson, et al 59). The sudden need for cheap labor led to the reliance on slavery, which would dominate the Southern economy and way of life for many years to come. In the late 1600’s, farmers began to invest in slavery rather than white servants because they would get more years out of the slaves, and also gain title to their children (Davidson, et al 63). New laws made it nearly impossible for white Masters to free slaves, further solidifying slavery in the South.

In contrast, the Northern colonies had a more industrial economy. The Northern colonies consisted of Massachusetts, Connecticut, Rhode Island, New Hampshire, New York, New Jersey, Pennsylvania, and Delaware. Almost every male settler in the North owned property, so small farms were, in fact, established across New England and the Mid Atlantic colonies (Davidson, et al 89). But unlike the South, the crops grown from these farms were not for capital, but rather for feeding the families. The soil in the North was too rocky and the climate was too unstable to have a promising agricultural industry. Many early colonists described the land as “rockbound and rugged… long winters of numbing cold melted into short summers of steamy heat” (Davidson, et al 85). Also, because agriculture was limited, the need for slavery did not exist. “With little hope of prospering through commercial agriculture, New England farmers had no incentive to import large numbers of servants and slaves or to create large plantations” (Davidson, et al 89). Instead, they traded fur with the Indians and established major harbors in Boston and Philadelphia for international trading. Shipbuilding and fishing also dominated port cities, such as Boston. “Boston’s merchants sent fish to the Caribbean and Catholic Europe” (Davidson, et al 118). As a result of different land and climates in the North and South, their economies differed, affecting many more aspects of the colonies as well. The Indians were the original settlers in the colonies as well as the rest of what would become America. As both the Southern and Northern settlers arrived in the New World, they took vastly different approaches in their treatment of the natives.

Neither region treated the Indians ideally. When Captain John Smith sailed to Chesapeake, many of his settlers were hungry and, “he bullied the Indians for food and would have enslaved them if it had been in his power” (Davidson, et al 52). It is hard to imagine that the early settlers took the Indians’ land, but in addition, bullied them to receive food. To take the Southern treatment of Indians to an extreme, the Carolinas traded the Indians themselves as slaves. The Carolinas needed cheap labor to grow their cash crops, but they could not afford African slaves. To fund this venture, the Carolinas resold enslaved Indians they traded goods for with other Indian tribes (Davidson, et al 70). The Carolinas treated Indians like they were a commodity, rather than as human beings, all in the name of funding an even greater evil: slavery. Although the Northern Colonists were involved in a number of conflicts with the natives, they were not nearly as cruel as the Southern Colonists. John Eliot, a Puritan leader, for example, helped set up a school within Harvard, to help Indians learn English and culture (Davidson, et al 94). Although this didn’t help the Indians grow as a tribe, it did not drive them away from the Colonists and made them feel more like a community.

The Northern colonies also needed help from the Indians to survive the harsh winters, so treating them well was important. In Pennsylvania, the Quakers coexisted peacefully with the Lenni Lenapes, another Indian tribe. “Before [William] Penn sold any land to colonists, he purchased it from the Indians (Davidson, et al 96). Because the Quakers settled in Pennsylvania for religious freedom, not profit, keeping peace with the Indians was part of their way of life. In short, the treatment of Indians reflected the reasons the two regions settled in America. The stability of the colonies also varied by region. The Northern colonies were significantly more stable than the Southern colonies for a variety of reasons. In the North, their settlements were closer together, creating more order and stability in their “tightly knit” communities.“The… [Northern] colonists lived to an average age of 70, nearly twice as long as Virginians” (Davidson, et al 89). The population in the North also increased naturally, whereas in the South, it was artificially increased by the import of African slaves. “By 1740, 40% of all Virginians were black” (Davidson, et al 67). Also, because of the higher life expectancy in the North, families were stronger.

About 90% of children in the North reached adulthood, and unlike the Chesapeake, most parents were able to survive and provide for their family (Davidson, et al 89). In the Chesapeake region, there were few churches whereas in the North, community life centered around churches, contributing further to a more stable society, which would help the Northerners in the long run. Although the Northern and Southern colonies in the 17th and 18th centuries shared some similarities, they were, in fact, separate and distinct civilizations. The colonies varied drastically in their economies, treatment of the native people, and their stability, mainly because their reasons for settling in the New World were different as well. The Southern colonies were established primarily for profit. The Northerners were looking to break free from Catholic Britain and have freedom of religion in the New World. The unplanned arrival in Plymouth, rather than the South, contributed even more to how different the two regions really were, based on geography. These differences, while distinct early on, ultimately led to much bigger conflicts in America, almost destroying it altogether. 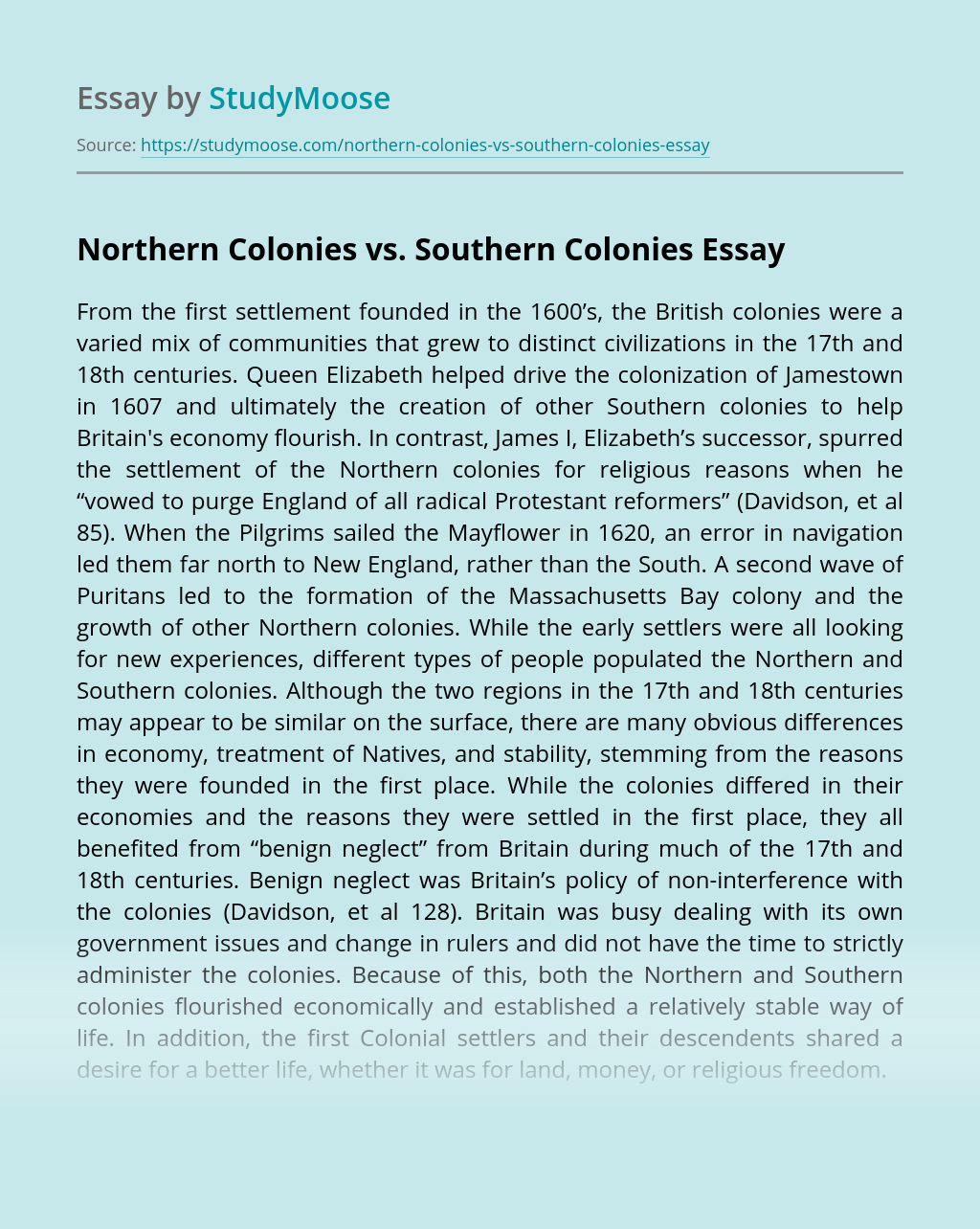