In the book Night by Eliezer Wiesel there were two major literary devices that were used, symbolism, and irony. Wiesel litters Night with recognizable symbols such as night, fire, and music so readers can relate to the book. Night was a huge symbol in the book, because any traumatic experience Wiesel went through was during the night. Night and darkness symbolize sadness, oppression, and the absence of God (in the book of Genesis in the Old Testament, the first thing God does is create light, so if there is no light, there is no God).

Don't use plagiarized sources. Get your custom essay on
“ “Night” by Eliezer Wiesel ”
Get custom paper
NEW! smart matching with writer

An example of something that happens to Wiesel is when he loses faith in God and grows angry with Him when he sees other Jews praying on the night of Rosh Hashanah.

Fire was presented in the book when Madame Schachter began screaming fire on the train to Auschwitz. Fire is a symbol for the destructive power of the Nazis. It’s an ironic symbol because in many Jewish religious texts fire is associated with God and divine retribution.

Music symbolizes life, in the camps the military march that was played every day represented the prisoners’ lives in the camps, work and survival. The music that Juliek plays represents his life, past, present, and future. These symbols help the readers understand the characters more.

Irony is used throughout this book to allow readers to connect with it more easily than other forms of writing. When Wiesel uses irony in Night, he is able to create a different feeling then we would get if Night was written in a strictly factual way.

“The yellow star? Oh well, what of it? You don’t die of it…” says Elie’s father. This is ironic because Elie’s father does not state that by wearing the stars, they are labeling themselves as Jews, the dregs of the Earth. So, in reality, many Holocaust victims did die because they were marked by different colored stars, symbolizing their ethnicity. The people listening to Elie’s father do not say a word to him about how being a Jew would surely bring about death.

Juliek and his violin was kind of ironic in the way that of all the things that would matter to a man at a time like this, he chooses his violin. If he would have lost this violin, he would be devastated. All of Juliek’s ties to his old life were in that violin. The irony within the book helps the book flow and helps the reader connect with it more. In conclusion, Wiesel uses symbolism and irony to help the reader understand and relate to the characters in the book. There were many other literary devices used throughout the book but symbolism and irony were the most important ones out of them. 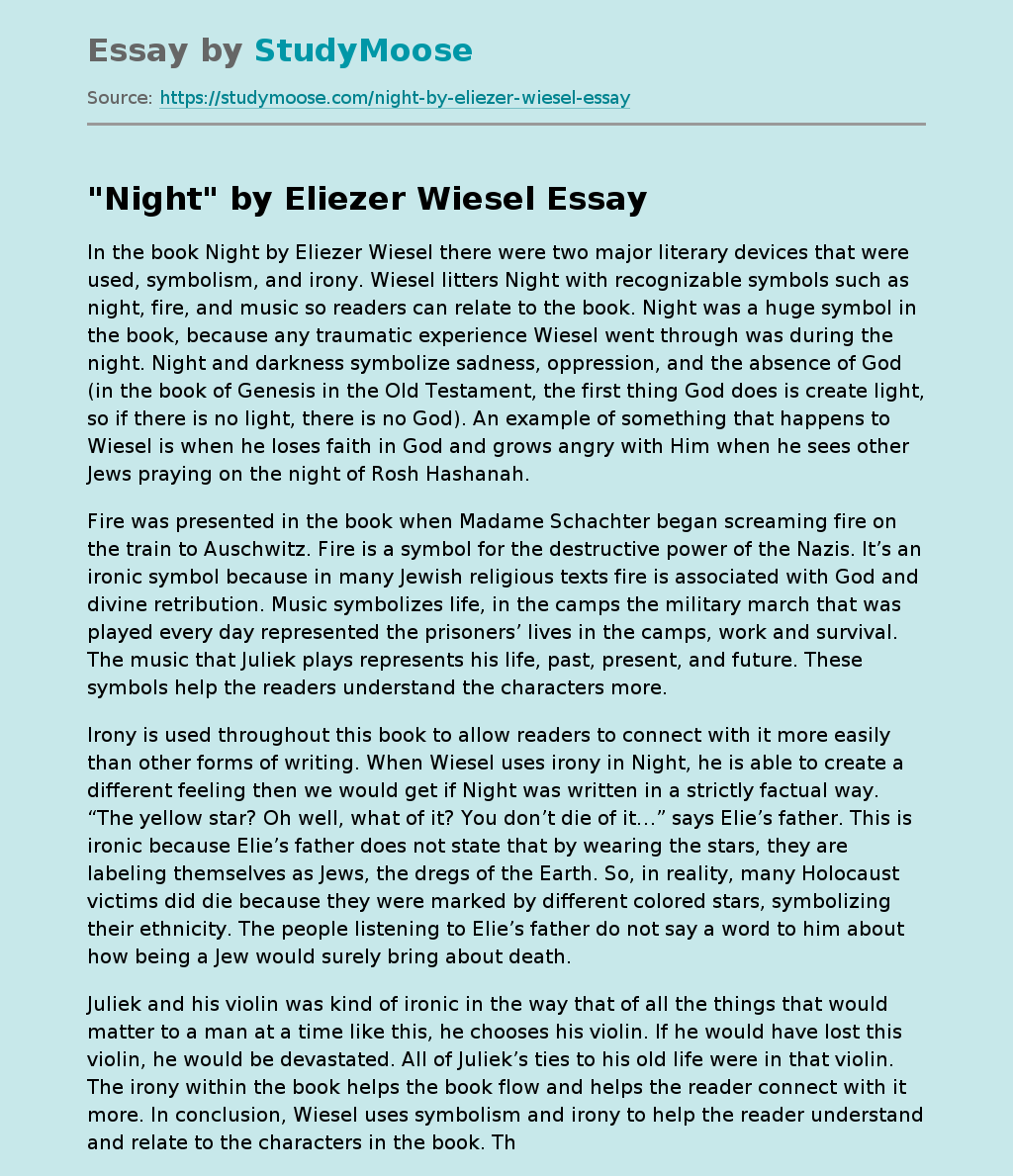