Night and Dawn - A Comparison of Elie Wisel's writings

Night and Dawn, both written by Elie Wiesel, are two books that have changed the way people view life and death. Night is a story of the Holocaust that occurs in the time frame of the mid-1900s. Elie, the author and the main character of Night, tells of the horrific years he spent in Germany’s concentration camps. During this time period, millions of Jewish people were shot by merciless Nazis. Dawn focuses on a young boy Elisha who is recruited into a terrorist organization after the Holocaust.

Turn in your highest-quality paper
Get a qualified writer to help you with
“ Night and Dawn – A Comparison of Elie Wisel’s writings ”
Get high-quality paper
NEW! AI matching with writer

He eventually finds himself caught in the middle of the war between the Jewish and the British fighting for freedom.

Both of Wiesel’s stories involve poignant emotions. Night shows the reader the horror of being murdered. Similarly, Dawn is about the horror of murdering someone. It is interesting to note that in Night, the Jewish is in front of the gun; in Dawn, the Jewish man is behind a gun. Both situations contain the predominant emotion of fear.

The two stories vary, but behind their covers, these stories deal with the same topic–cruel murder. Elie Wiesel deals with this topic through the characters, the character’s histories, and their similarities and differences.

Elie Wiesel’s journey begins in Sighet where his family believed strongly in their religion. The Nazis have set the goal — genocide of the Jewish citizens. He is sent to a concentration camp in Germany where he must endure the harsh brutality of the Nazis. It is only at these concentration camps that Elie discovers the truth about himself.

Dawn is about a scarred Jewish man Elisha who is recruited to join an extremist group that is fighting for their freedom against the English.

One of the terrorist party members, David, is captured by the English during an operation of smuggling arms and is threatened to be killed for committing this crime. The Jewish freedom fighters suddenly become enraged and devise their own plan; The capture of their own hostage, Captain Dawson. The Jewish then plan to exchange the Captain for David. Elisha, who just joined the group, is then assigned his first task–the harsh mission of murdering the Captain. While Elisha may not have a physically painful task, he must endure the mental anguish that murder brings. Once the murdered, now the murderer.

Wiesel utilizes the characters to emphasize his purposes. The two main characters in Night and Dawn, Elie and Elisha, share both similarities and differences. Elie keeps his feelings and his actions within his mind. His thoughts tell the story and provide readers with emotion. On the other hand, Elisha tends to act his thoughts out, which is the main reason that he joined the terrorist group. For example, Elie prays regularly in order to fuel his hope that one day he will find freedom; Elisha contrastingly kills and destructs out of his emotional and horrendous past. This they both lost their precious childhood at such an early age. Their childhood provides us with the chance to be naïve and more importantly, the chance to be innocent. Innocence is the only time in life, where you do not possess the knowledge to differentiate between right and wrong. Unfortunately, the main characters did not have the time to slowly explore maturity.

Instead, they were forced into the scary and unstable life of adulthood ultimately leading Elie and Elisha down to the fork in the path. The two narrators try to convince themselves that their actions are helpful to society or to themselves. For example, Elisha says, “I’ll think of David too, I reflected. He’ll protect me. John Dawson may try to make me laugh, but I won’t do it. David will come to my rescue” (79). Elisha is trying to reassure himself that David, the Jewish hostage, is a good reason to murder the Captain. Similarly, Elie had many thoughts toward his commitment to God. When he finally questions his faith he claims, “I felt very strong. I was the accuser, God the accused” (65). As shown through these examples, throughout the novels, the reader is able to grasp and feel Wiesel’s thoughts and ideas by carefully observing and analyzing the characters of Elie and Elisha.

Wiesel wrote Night in an attempt to leave the reader feeling as if he were a Jewish citizen during the time of the Holocaust. The author achieves this through his vivid descriptions and emotional family affairs, such as the time where Elie is separated from his family. When connecting with a character, one understands the character’s dilemmas, such as Elie’s questioning of his religious faith. In Dawn, Wiesel’s purpose was to make the reader see through the eyes of a murderer, and the difficulty of murdering without a reason in which he believes. Elisha struggles because he cannot find the answer to the question within himself: “Why am I killing Captain Dawson?” Both stories try to make the reader empathize with the main character. Both Elie and Elisha have a difficult time living in Night and Dawn. The author exaggerates this in Dawn by using the phrase “Poor boy!” to describe Elisha. In Night, the author tried to gain sympathy for Elie by putting him into painful situations.

One event that represents this was the time where Elie was whipped by a Kapo, “He took his time between each stroke. Only the first ones really hurt me. I could hear him counting” (55). Going into more depth, Wiesel writes about how each character deals with his pain. Elie copes with loss through his belief in God and his strength; Elisha copes with his loss by communicating with apparitions of the people by which he has been influenced, and the people he has influenced.

While making the readers sympathize with the main characters, Wiesel also uses both stories as important information that reflect on our past and our present. Night and Dawn serve as documentations that show readers some of the darkest moments in our history. In these two novels, the author compares the past to the present. While the audience reads this book, it may realize that we still face the same problems today as we did fifty years ago. Perhaps Wiesel wrote these books in attempt to change the future for the better of mankind.

Even though there are many similarities between Night and Dawn, the books also have significant differences. Foremost, in Dawn, The tables have turned, and this time they are in control. Many times throughout Dawn, the terrorists say, “This is war,” in an attempt to give reason to the assassination of the English man. However, they are simply “putting on the field-gray uniform of the SS” (30). Perhaps the Nazis used this same excuse while brutally slaughtering thousands of Jewish people. The attacker must put himself in the victim’s shoes; likewise, the reader must put himself into the main character’s shoes. And although the tables have turned for the Jewish man, the reader can still relate to the main character because he is in his shoes. This slaughtering inevitably scars each victim.

Of course, each character deals with his pain in a different way. In Night, Elie uses his thoughts to heal his wounds constructively. In Dawn, Elisha acts out his thoughts and seeks revenge destructively. A prime example that is representative of Elie is the time when he sees the young boy that is being hung. At this event, a man asks, “Where is God now?” Elie then responds with the following thought: “Where is He? Here He is–He is hanging here on this gallows…” (62). However, Elie does not speak out; rather, he keeps his thoughts within himself. On the other hand, Elisha uses his instinct to guide him into sin. As Elisha bitterly states:

I understood Gad’s bitterness; indeed I envied it. He was losing a friend, and it hurt. But when you lose a friend every day it doesn’t hurt so much. And I’d lost plenty of friends in my time; sometimes I thought of myself as a living graveyard. That was the real reason I followed Gad to Palestine and became a terrorist: I had no more friends to lose (35).

This suggests that Elie has become totally numb to the idea of death. He has been set free to the burden of mourning. This is why Elisha does not cry or yell out in pain after he murders Captain Dawson. It is interesting to note that even though Elie and Elisha find themselves in similar situations, they each deal with their problems in their own unique ways.

These two novels carry the same purpose–touching the hearts of the readers from their history, to their agonizing life during the Holocaust. In Dawn, Wiesel states that “War is like night… It covers everything”. This statement proved true for both Elie and Elisha; however, the war did not give them the same view on life or of the Holocaust. Dawn and Night show the good and the bad that resulted from living in a painful past. Elie searches within himself to discover inner peace, even during such a painful period in his life. Similarly, Elisha also searches within himself but unlike Elie, he discovers extreme hatred. Dawn and Night are stunning novels that bring the reader into some of the most painful and agonizing scenario; this was what Wiesel desired–and he has been successful.

Night and Dawn - A Comparison of Elie Wisel's writings. (2016, Jul 09). Retrieved from https://studymoose.com/night-and-dawn-a-comparison-of-elie-wisels-writings-essay 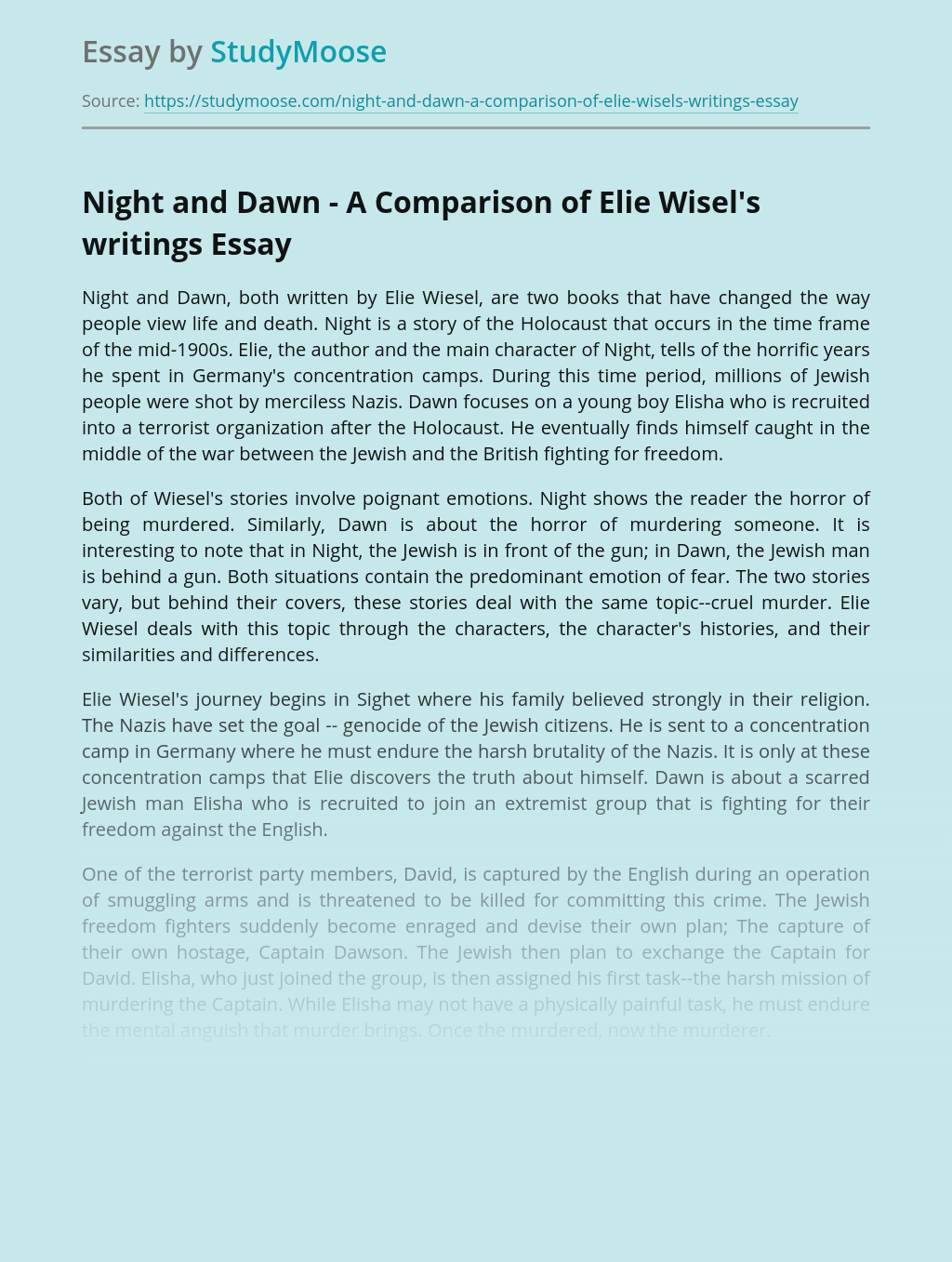 Turn in your highest-quality paper
Get a qualified writer to help you with
“ Night and Dawn – A Comparison of Elie Wisel’s writings ”
Get high-quality paper
Helping students since 2015
Stay Safe, Stay Original