During the 1610, the New England and Chesapeake region were both settled largely by people of English origin, but by 1700 the regions developed into two distinct societies. The distinctions of development arose due to differences in economy and political structure. The economy and political structure of New England and Chesapeake differed based on the geography, needs and the different values or purposes that the regions served, causing two distinct societies to emerge by 1700. In terms of economics, early distinctions occurred in that the economy of the Chesapeake colonies was based on large plantations whereas the economy of New England was based on subsistence farming and mercantilism.

Don't use plagiarized sources. Get your custom essay on
“ New England and Chesapeake ”
Get custom paper
NEW! smart matching with writer

In early 17th century Virginia, tobacco became Virginia’s biggest profits. By 1700, 40 million pounds of tobacco was produced and large plantations were dedicated to just growing tobacco, producing a single crop economy. The large plantations provided landowners or tobacco growers with cheap and plentiful labor through the use of slaves and indentured servants.

In document C, the passengers aboard the ship bound for Virginia are all mostly made up of single men well below the age of 40, showing that many are probably indentured servants who are going to work in the large plantations.

By the 1660s the overproduction of tobacco dramatically decreased tobacco prices causing indigo and rice to become greater commodities. Still large plantations dominated the economy by producing indigo and rice as well. However New England colonies were based on subsistence farming and a barter economy in the early 17th century. Only enough food would be grown to support the community.

Fishing oysters, whaling and homespun industry (artisans) dominated the economy. In document B, many craftsmen ventured to New England, showing that artisans were an important part of the economy.

There were a few number of farmers aboard the ship as well indicating that farming was not a large part of the economy. After the Restoration and the Navigation Acts in the 1660s which restricted colonial trade to England, New England became a mercantile based economy. Trade dominated the economy. The Chesapeake colonies depended more one agriculture in their economy whereas the New England colonies depended more on trade due to the geography of the two regions. Chesapeake was located further south than New England, therefore having longer warmth periods and flat lands. These geographical advantages allowed the Chesapeake colonies to have a longer growing season and to be able to create large plantations. The geography of the New England colonies restricted the growing season due to the high ground with many rocks and the cooler climate. New England was located along the coast giving it access to many deep harbors to foster trade. Chesapeake and New England were able to develop into distinct societies due to their different economies where Chesapeake relied on agriculture while New England relied on mercantilism. In terms of economics, the economy of the regions differed in that Chesapeake was based on slave labor and indentured servitude whereas New England was based on reciprocity. Document A shows how New England is based on reciprocity.

John Winthrop, claims that in order for the Massachusetts Bay Colony to succeed, everyone in the colony must work together productively and fend for one another. “We must be knit together in this work as one man. We must entertain each other in brotherly affection, we must be willing to abridge ourselves of our superfluities, for the supply of other’s necessities.” This shows that the colonists of New England not only work as a group by helping each other achieve success, but also treat each other with respect. Document B shows that most of the passengers heading to New England are heading there with their entire family, indicating there must be a cooperation system in New England where people cooperate with each other to meet their needs and gain profits. Many families are also traveling with their own servants therefore it can be seen that indentured servants or slave labor was not the foundation of the New England economy. In contrast document C shows that the people heading towards Virginia (Chesapeake colony) are mostly young single men who are probably indentured servants thereby showing that the economy of the Chesapeake colonies are based on slave labor and indentured servants. During the early 1600s, the Chesapeake colonies mostly depended on indentured servants and some slave labor since a large and cheap labor source was needed for the tobacco plantations. Since many people did not come in families, families formed slowly and could not provide a strong and abundant labor force. Natives in the colonies died quickly, causing a need for a more reliable labor force. Therefore the colonists of the Chesapeake colonies turned to indentured servants, displaced farmers in England who wanted to venture to the colonies, but did not have enough money to pay for the
voyages by themselves.

A plantation owner would pay for the indentured servants’ voyage and the indentured servant would have to work off the debt by working on the plantations with the promise that they would get land and shelter once they were freed. However, in the 1660s indentured servants became scarce and many of them were freed from service causing plantation owners to turn to slave labor to maintain their plantations. The economy of the Chesapeake colonies depended on slave labor and indentured servitude while New England depended on reciprocity due to Chesapeake’s dependence on agriculture for wealth and New England’s dependence on trade and crafts for wealth. Plantations worked most effectively through the use of cheap and abundant labor while trade and mercantilism worked most effectively through cooperation. In terms of political structure, differences in government can be seen in that the Chesapeake colonies were based more on the landed aristocracy whereas the New England colonies were based more on religion and the church. In the Chesapeake colonies the plantation owners of the landed aristocracy had most control over the government. Many landowners and the landed aristocracy made up the government including the council and the House of Burgess in Virginia. These officials made up the laws and collected taxes, giving them control over the government. William Berkeley, the governor of Virginia during the mid-1600s adopted many policies favoring the plantation owners and used his powers to benefit the landowners, giving large planters economic and political control in the colony. Many freemen who worked off their debts did not have land. The favoring of the landowners by the government soon erupted into a rebellion led by Nathaniel Bacon.

In Document F, Bacon’s Manifesto claims that the government is corrupt and only concerned for their own estates, collecting all the money from the taxes to better develop their estates, showing how the planters dominated the political life of New England. The government failed to protect the frontier settlements where most yeoman farmers were from Indian attacks and instead only concerned themselves with the large plantations. In contrast the government of the New England colonies were centered on religion. In the Plymouth settlement, the church became the civil and social institution of the colony. People who did not conform to the religious values or ideals of the Puritans were executed as seen in the Salem Witch Trials, where the government ordered and allowed the execution of “witches” or social outcasts in 1692. In Massachusetts, communities of pure Christians were made. The government did not tolerate any religious views besides Puritan views. Even education and literacy centered on religious values. Land in the New England colonies were maintained and controlled by the Elders of the church and the amount of land given to each family would depend on their usefulness to the church as well as the size of the family. Every family should have enough to sustain themselves. The church also dominated political authority.

Only male church member could vote, pass taxes, settle disputed, hold town meetings and appoint government officials. The government of the New England colonies was centered on religion whereas the government of the Chesapeake colonies was centered on planters. The differences are due to the original purpose of each region/colony. Virginia and Maryland were founded primarily for commercial venture causing land and commodities to become most important, thereby having land equated power. Massachusetts and Plymouth were founded primarily for refuge for English separatists or puritans causing religion to become the most important aspect of colonial life and thereby giving power to the church. All in all the New England and Chesapeake settlements evolved into two distinct societies despite their English origin due to their economic and political differences. 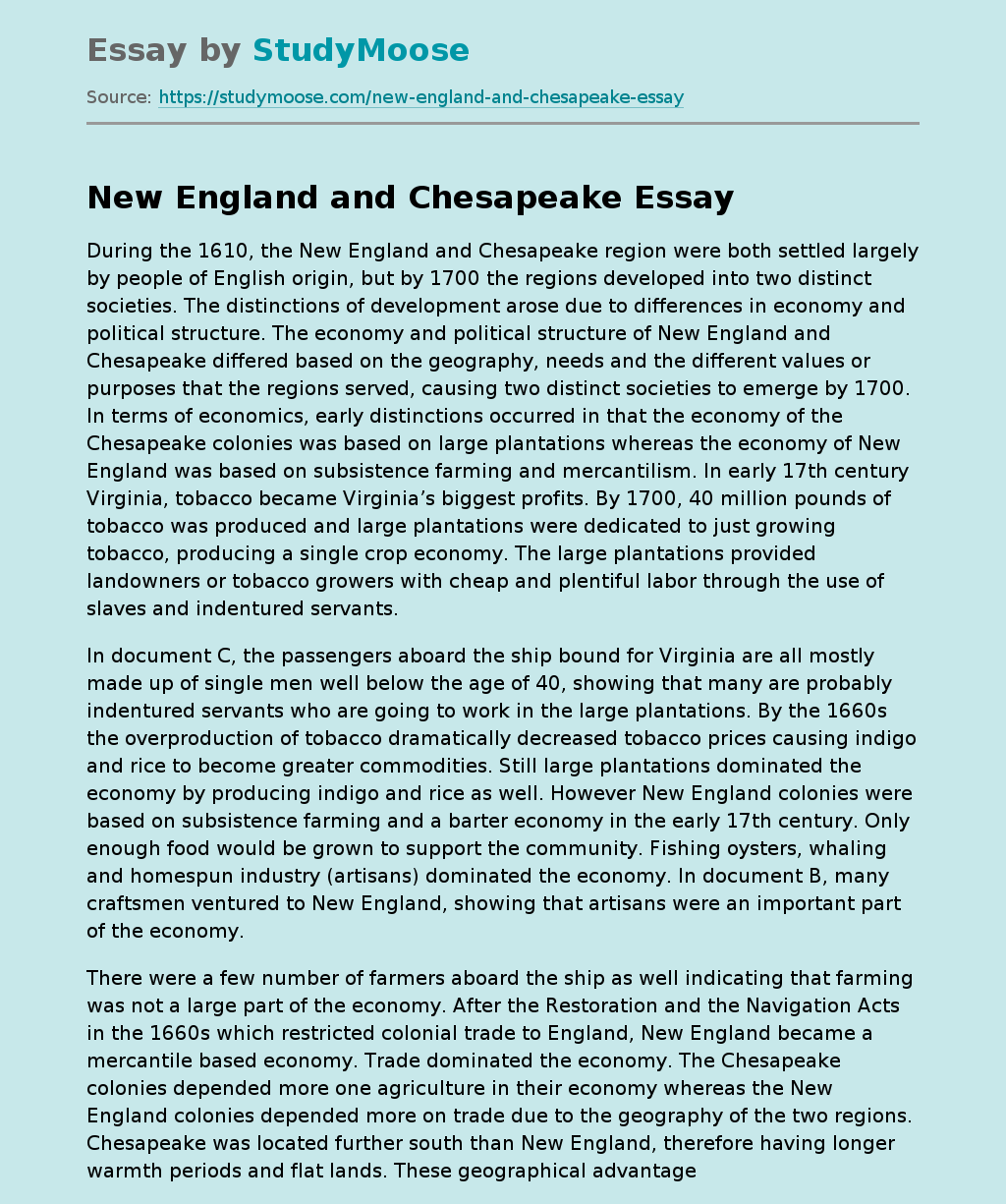