The Nervous System is the system of cells, tissues, and organs that regulates the body’s responses to internal and external stimuli. In vertebrates it consists of the brain, spinal cord, nerves, ganglia, and parts of the receptor and effector organs.

Don't use plagiarized sources.
Get Your Custom Essay on Nervous System Just from $13,9/Page

The brain and spinal cord together form the central nervous system. The cranial nerves connect the brain to the head. The four groups of nerves that branch from the cervical, thoracic, lumbar, and sacral regions of the spinal cord are called the peripheral nerves.

The motor division transmits impulses from the Central Nervous System out to the peripheral organs to cause an effect or action.

The brain is the source of all our behavior, thoughts, feelings, and experiences. In humans, the brain weighs about 3 pounds. Differences in weight and size don’t have anything to do with differences in mental ability. The brain is a pinkish mass that is composed of about 10 billion nerve cells. The nerve cells are linked to each other and together are responsible for the control of all mental functions.

The brain is divided into three major parts, the hindbrain, the midbrain, and the forebrain. The cerebrum occupies the topmost portion of the skull. It is by far the largest part of the brain. It makes up about 85% of the brain’s weight. The cerebrum is split vertically into left and right hemispheres. Its upper surface, the cerebral cortex, contains most of the master controls of the body. In the cerebral cortex ultimate analysis of sensory data occurs, and motor impulses originate that initiate, reinforce, or inhibit all of the muscle and gland activity. The left half of the cerebrum controls the right side of the body; the right half controls the left side.

The Midbrain joins the diencephalons and the medulla oblongata. It has centers that control movements of the eyes and of other part of the body. The hindbrain lies toward the back and base of the skull. It includes the medulla oblongata and cerebellum. The cerebellum consists of two hemispheres. Although it represents only 10% of the weight of the brain, it contains as many neurons as all the rest of the brain combined. Its most clearly understood function is to coordinate body movements. People with damage to their cerebellum are able to perceive the world as before and to contract their muscles, but their motions are jerky and uncoordinated. So the cerebellum appears to be a center for learning motor skills.

You may also be interested in the following: nervous system essay 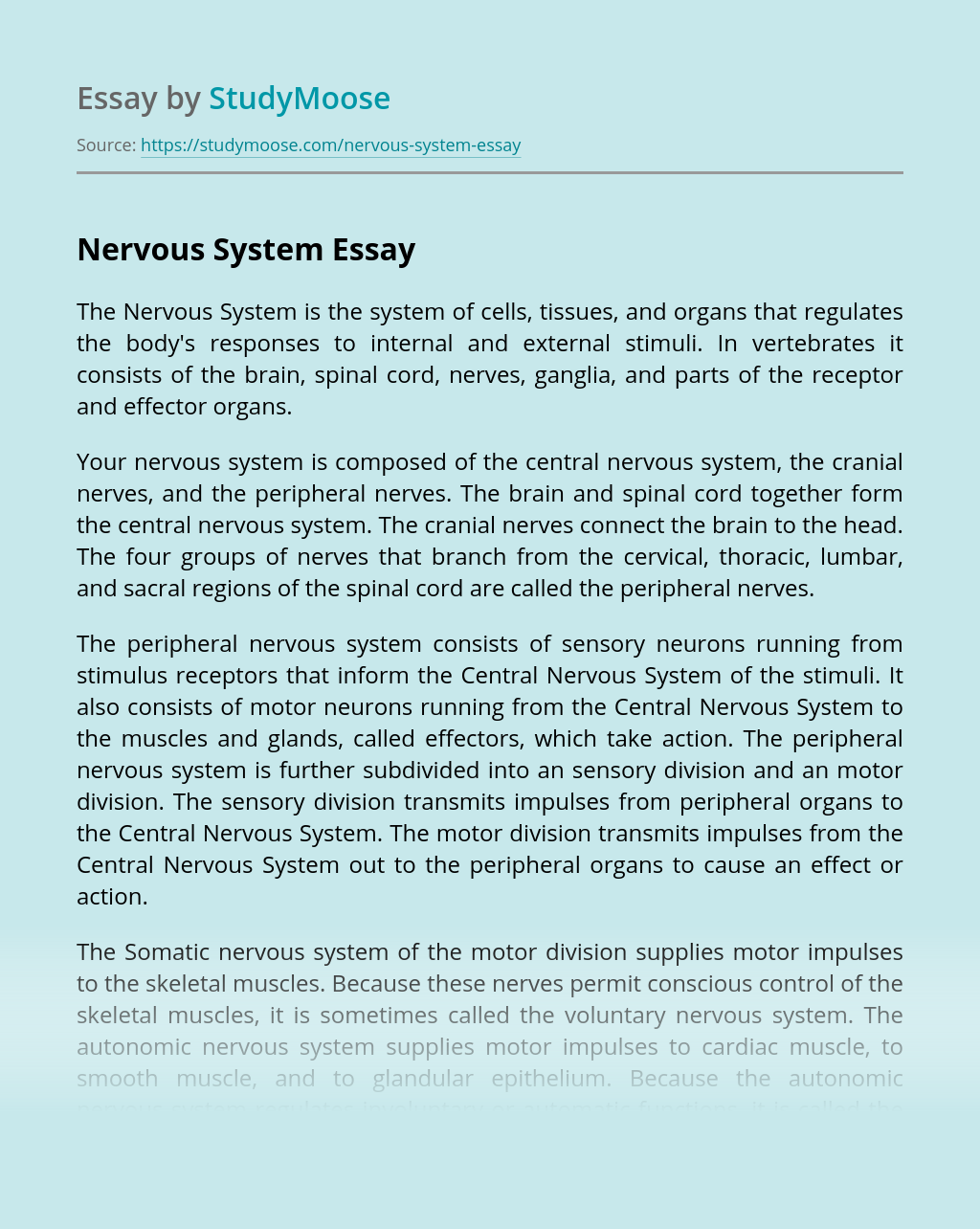