“My Life had stood – a Loaded Gun – ” Feminist Analysis

This poem was written by the American poet Emily Dickinson around the year 1863. It is probably one of the most complex of all Dickinson’s poems because it does not have a single coherent and satisfactory interpretation. This is due to the fact that it exemplifies her technique of the ‘omitted centre’, a device by which the author omits information that is crucial to the understanding of the poem.

Nevertheless, the aim of the present paper is not to discuss the manifold possible interpretations of the poem. Its aim is rather to try to explain it or analyze it from a feminist point of view, highlighting how it gives an image of a woman different from the one people are used to, as well as how it inverts the gender roles but accepting them at the same time. The speaker starts by presenting herself as “a Loaded Gun”, that is as a mortal weapon capable of killing and destroying.

This can be understood as the poet’s rejection of the traditional ideas and images about femininity, she is portraying herself as strong and potentially active in opposition to the common ideas of weakness and passivity associated with women. Later on, in the third stanza, she will compare herself to a volcano, turning the possibility of destruction – a contingent fact up until that point – into a reality. So now she is not only telling the reader that she can be active, dangerous, and destructive, but she is actually being it: the previous threat is now an event.

This image of the volcano is even more important because it is a common one, used also by Emerson – one of her greatest influences – to refer to the poet. The difference is that whereas in Emerson’s essay The Poet it is a rather benignant image – this of the volcano – used to portray the poet as a power of nature; in Dickinson’s poem it is a burning and destructive force. With this change in the meaning or connotation of the metaphor, she may be telling us that creation, carried out by a woman, is at the same time an act of aggression. This idea is closely related to the reading many feminists have made of this poem, seeing it as an example of how power in a woman can be seen as a danger or even a threat.

As for the gender roles one may argue that there is a contradiction in this poem. On the one hand she depicts herself as the active force in her relationship with her “Owner” and “Master”. She speaks “for Him”; she fights for him and defends him from Salceda 2 his foes. It is important to notice how in the fourth stanza she guards his head while he sleeps, thus preferring or putting her role as defender before her role as lover, i.e. her masculine role before of her feminine role. It is better to kill for him than to lay with him. In this poem she is the “knight in armor” while the male is, as to say, the “damsel in distress”. But on the other hand, the reader is told at the beginning that her “Life had stood – a Loaded Gun – / In Corners” until her “Owner passed” and “identified” her.

That is, she had no identity of herself; she did not exist as an individual endowed with consciousness until he found her. It is also important to notice that the vocabulary used in the first stanza depicts her as an object. Therefore all her representations of herself as the leading figure in the poem, the strong one, the powerful one are, in some way, undermined by the fact that, at the beginning, she is just an object endowed with subjectivity by a real and pre-existent subject – the male character – who then becomes an object himself. The idea that her subjectivity is only one borrowed from him can be clearly seen in that, throughout the poem, her only goal is to defend him, to protect him form his foes who are at the same time hers. Nonetheless, this dependence on a male subject is, if not denied, at least overcome in the last stanza where the speaker presents herself as immortal. Thus, if she will live long before he has died, her existence must be independent of his.

If the last part of my analysis seems confusing and even contradictory, it is because the poem itself, as it has already been said at the beginning, is confusing and even contradictory. To sum up I would like to say that, from my point of view, the important point about this poem is how Dickinson’s attempt to break up with the traditional ideas of womanhood and gender roles, since it is based upon the traditional opposition between femininity/masculinity, passivity/activity, object/subject, proves itself in some way “futile”. One may notice that she is not defending femininity, or trying to posit it higher or at the same level than masculinity, but what she is doing is taking a male position.

This may explain why she takes her identity from a man. She is opposing the fact that being a woman entails being passive and defenseless, but at the same time she is saying that her aggressive character appeared only after a man identified her. So, she is not pulling down the differences or the hierarchy existing between male and female, but interchanging the roles. Nevertheless, one should not think that Dickinson’s poem is a failure – from a feminist point of view –, but on the contrary it is a success, since she manages to highlight the difficulty, or even impossibility, of writing at the same time Salceda 3 from and against a preestablished language and a system of thought, which are the very bases of the discrimination of women.

“My Life had stood – a Loaded Gun – ” Feminist Analysis. (2017, Jan 10). Retrieved from https://studymoose.com/my-life-had-stood-a-loaded-gun-feminist-analysis-essay 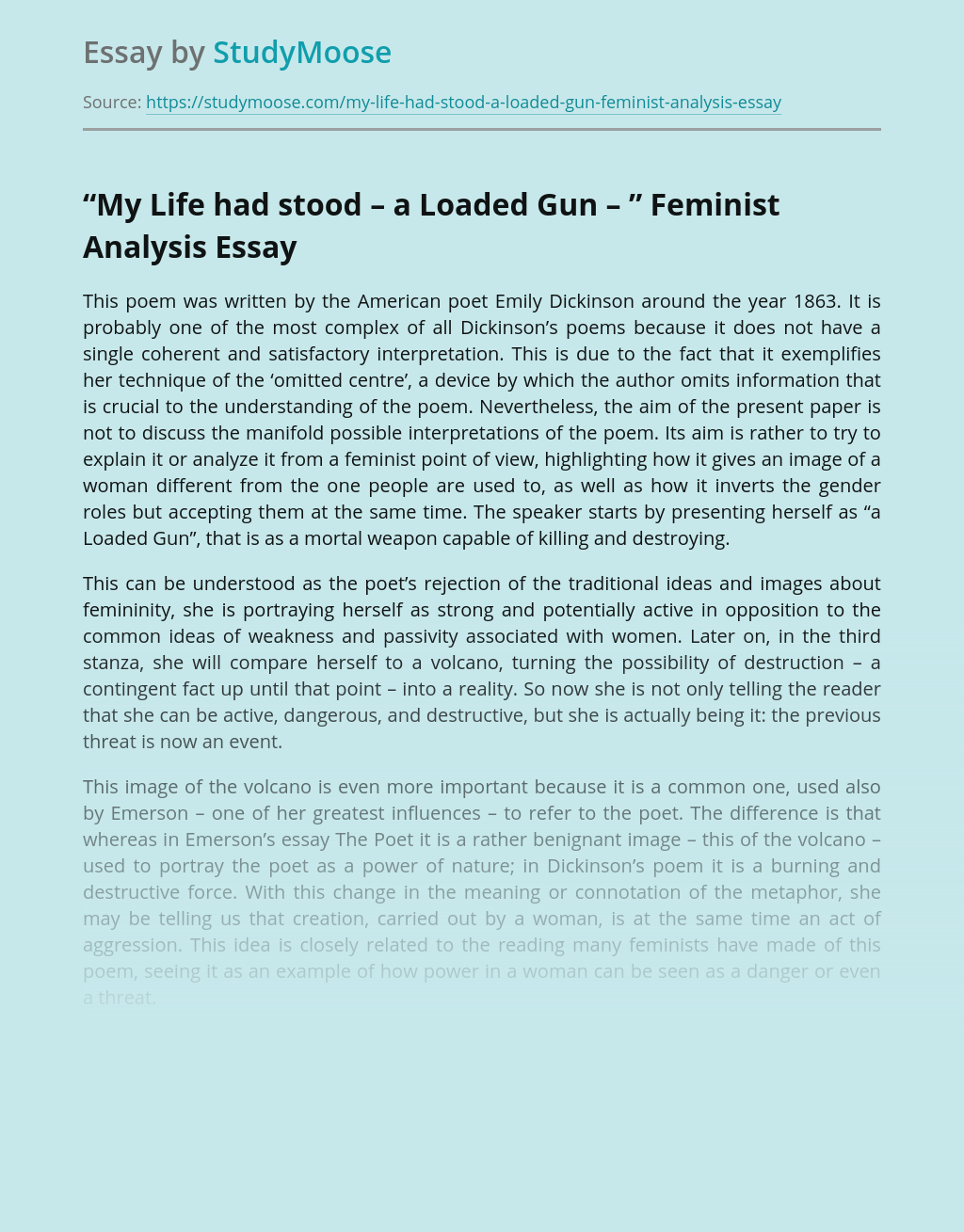