My Father Goes to Court by Carlos Bulosan

Summary:
The story is set in a city in the Philippines. The young narrator begins by describing his large family. Though they are poor they are full of mischief and laughter. The children are all strong and healthy even though they often go hungry. In contrast, their rich neighbor’s children are thin and sickly although they are given plenty of good food, which their impoverished neighbors enjoy smelling over the fence. Consequently, the rich man brings a charge against the narrator’s family for stealing the spirit of his family’s food.

Don't use plagiarized sources. Get your custom essay on
“ My Father Goes to Court by Carlos Bulosan ”
Get custom paper
NEW! smart matching with writer

The absurd case goes to court, and the narrator’s father agrees to pay back the rich neighbor. He does this by collecting coins from all his friends present in his hat, then shaking the hat full of coins. Being charged to pay for the spirit of food which his family supposedly got from its smell, he maintains that the jingling of the coins is a fair equivalent.

The judge rules in the poor father’s favor, and the rich man is forced to depart with no other payment than the “spirit” of the money the poor man collected.

I. Plot
· Incentive Movement
– The young narrator begins by describing his large family

· Rising Action
– Complaint of the rich man to the father in terms with the spirit and wealthy food causing for his family became thin and sick.
· Conflict
– In this story, the rich family and poor family having a conflict in each other.
· Climax
– The tension in this story is when
· Falling Action
– It is accurate to the story because the father give also the questions that given by the lawyer of the rich man and then next is on how the poor man will pay for that.

II. Characters
(The young narrator, Father, wife and his children, Rich man with his children’s, servants, policeman, judge and the lawyer.) – The character seems real and depth in emotions and they are recognizable in their stereotypes. And their motives were understandable that we can relate to them. The Good guy/s which is the father was likeable and same as the bad guys/s which is the rich man that it is really bad.

III. Setting
– The story is set in a city in the Philippines that accurate to what the story all about. The setting of the story is very Filipino, people in the barrio, helping each other. The young narrator is allowing the readers to experience what they are reading so that readers could imagine clearly the location around the characters.

IV. Point of View
– This Short story is a 2nd point of view because the young narrator itself is in the story. He or She is inside of the story she or he is telling what is happening there.
V. Figurative Language
– In this matter it uses Hyperbole because it says here that the poor family was stealing the spirit and wealthy of the food by smelling it only causing for the rich family became thin and sickly. And also consider the paying of the father to their food spirit and wealthy ny jingling the coins.

My Father Goes to Court by Carlos Bulosan. (2016, Mar 15). Retrieved from https://studymoose.com/my-father-goes-to-court-by-carlos-bulosan-essay 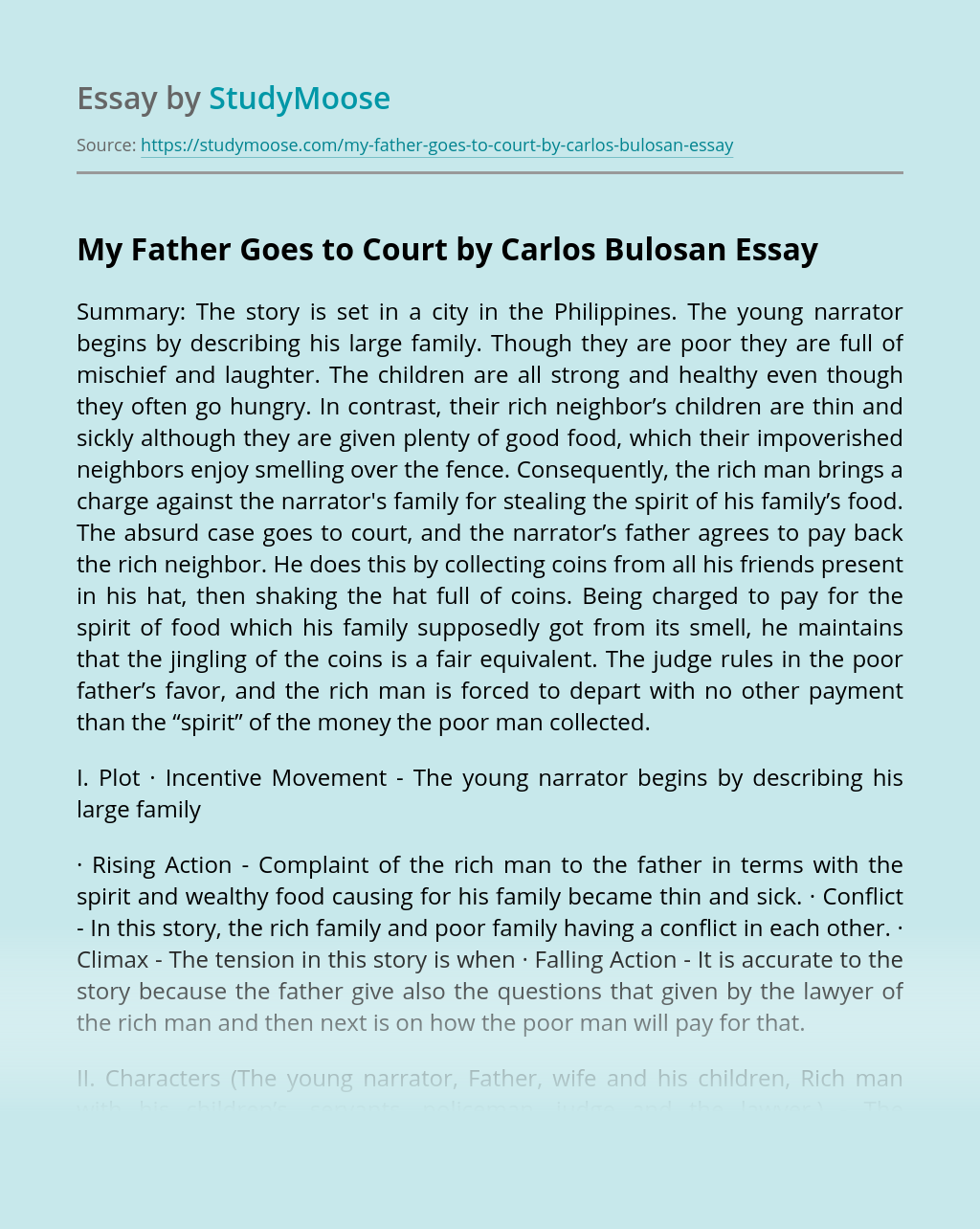