My Country is an iconic nationalistic poem about Australia written by Dorothea Mackellar in 1908. Dorothea Mackellar was born in Sydney in 1885. Her education was comprised of private home tutoring until she attended University of Sydney. She travelled broadly with her parents and also become fluent in Spanish, French, German and Italian. She highly educated and lived an adventurous life. Though raised in a professional urban family, Mackellar’s poetry is usually considered as typical bush poetry, inspired by her experience on her brothers’ farms near Gunnedah, North-West of New South Wales.

Don't use plagiarized sources.
Get Your Custom Essay on My Country – Dorothea Mackellar Analysis Just from $13,9/Page

Dorothea began writing at a young age and astonished her family when magazines paid to buy the rights to publish her prose pieces of literature. On September 1908 a poem, ‘Core of My Heart’, appeared in the London Spectator. It also reappeared several times in Australia before being renamed as ‘My Country’ in her first book, ‘The Closed Door and Other Verses’. During World War I ‘My Country’ became one of the best-known Australian poems which successfully appealed to the sense of loyalty nurtured by the war and post-war patriotism.

This was all because of its frequent inclusion in anthologies. The Mackellar family owned several properties in the Gunnedah area in New South Wales, and it is this country that inspired her writing career.

An Anthology is a collection of priceless pieces of literature. An anthology will include all types of literature; fiction, poetry and drama to journals, letters, essays and speeches. An anthology records the enhancement of one of the great literatures in all its energy and variety. Hence, ‘My Country’ deserves a place in such as collection because there is a strong contrast between the Australia she saw from the current one.

‘My Country’ is a rhyming poem which consists of fourteen stanzas. The descriptive language is evocative/ expressive of various Australian landscapes and will attract readers of all ages. The poem has been brought to life as a magnificently exemplified picture book.

Mackellar introduces the idea of Australia’s uniqueness firstly in the first two stanzas, with a juxtaposition of Australia’s wild landscape compared to England’s local landscape. England’s scenery is described as ‘grey-blue distance, brown streams and soft, dim skies’; While Australia’s landscape is portrayed as ‘a land of sweeping plains, of ragged mountain ranges, of droughts and flooding rains’. This description of the two countries suggests that the Dorothea’s persona believes that Australia’s remoteness makes it beautiful and incomparable to England’s landscape. This informs the reader that she prefers the sunburned land of Australia with its savannahs and mountains and ever-changing weather. It is not a calm land; it is a challenging one, harsh in times of drought, unpredictable in rainy season. Flood and fire are part of the landscape and can be overwhelming. Yet for all the wildness, all its fierceness, it can be a generous land and a magnificent one, and those who call it home have an innate connection to the land.

From ‘I love a sunburnt country’, which presents the following stanzas on Australia, Mackellar begins inducing the idea of Australia not just being a dead piece of land but equivalent and featuring similar characteristics of a person. This idea is deliberated through personification by denoting to the land as she or her. For e.g. the poem reads, ‘I love her far horizons, I love her jewel-sea, and’ -‘for flood and fire and famine she pays us back threefold’. By utilising this technique, Mackellar is able to express the deepness of her relationship and passion for her land truly is.

There is a steady rhythm in the poem, which exemplifies some sort of flow of life, for example, ‘floating rains’, or it’s running in your veins’, which present this method deliberately. The reader can imagine how vivid, detailed and erratic the country is due to the thorough detail that Mackellar uses to describe it. This enables the reader to identify and relate to it in some way. For example, ‘my homing thoughts will fly’, informs the reader that she is thinking of her home, and also ‘opal hearted country’. Mackellar uses simple vocabulary that everybody can understand and appreciate, but often some the verses and words have other meanings. For example, she repeatedly says; ‘core of my heart, my country’.

Mackellar uses romantic words in her poem, ‘I love her jewel like sea’, and the reader can visualise the image she produces in their head. These images include, ‘a land of sweeping plains, of ragged mountain ranges’ and ‘my heart, my country’. Words like these appeal to the reader’s emotions and have a strong effect. Consequently, she also writes about negative points in life ‘when sick at heart, around us, we see the cattle die’ and especially on this continent ‘of droughts and flooding rains’. Nature disasters like ‘flood and fire’ are in contrast to ‘the hot gold hush of moon’ .The poet describes the contrast with the conflicting words ‘her beauty and her terror’.

In addition, she also illustrates images through the expressive colours; Descriptions such as ‘Sapphire misted mountains’ and ‘opal hearted country’, display a special exclusivity that only her love of country reflects. She presents emotion with verses such as, ‘my country’ and ‘my Heart’, which signify her love and nationalism towards Australia.

Many of the previous Australian anthologies consist of vivid, descriptive lively pieces of literature which highlight certain moments or events. ‘My Country’ has been included in many Australian anthologies which were published after the First World War. It’s important to publish this poem into this current era’s anthology as well because, it will educate future generations about Australia’s landscapes, physical aesthetics and how it was received by the people during that time. Dorothea Mackellar’s poem deserves a place in the current era’s anthology because; the verses of the poem carry deep meaning. Mackellar has also lived in the Australian country side for a while and she has included every moment of her experiences and love she had in her heart, for her country.

To conclude, ‘My Country’ has been the greatest iconic, patriotic poem about Australia. Since it was written by an Australian with English ancestry, it includes a comparison of Australia and Great Britain. Her poem has won many awards and has been received well by readers across the nation. Also, it lets the reader open his/her heart and establish a strong connection with Australia. Therefore, it surely deserves a place in the upcoming anthology about Australia. 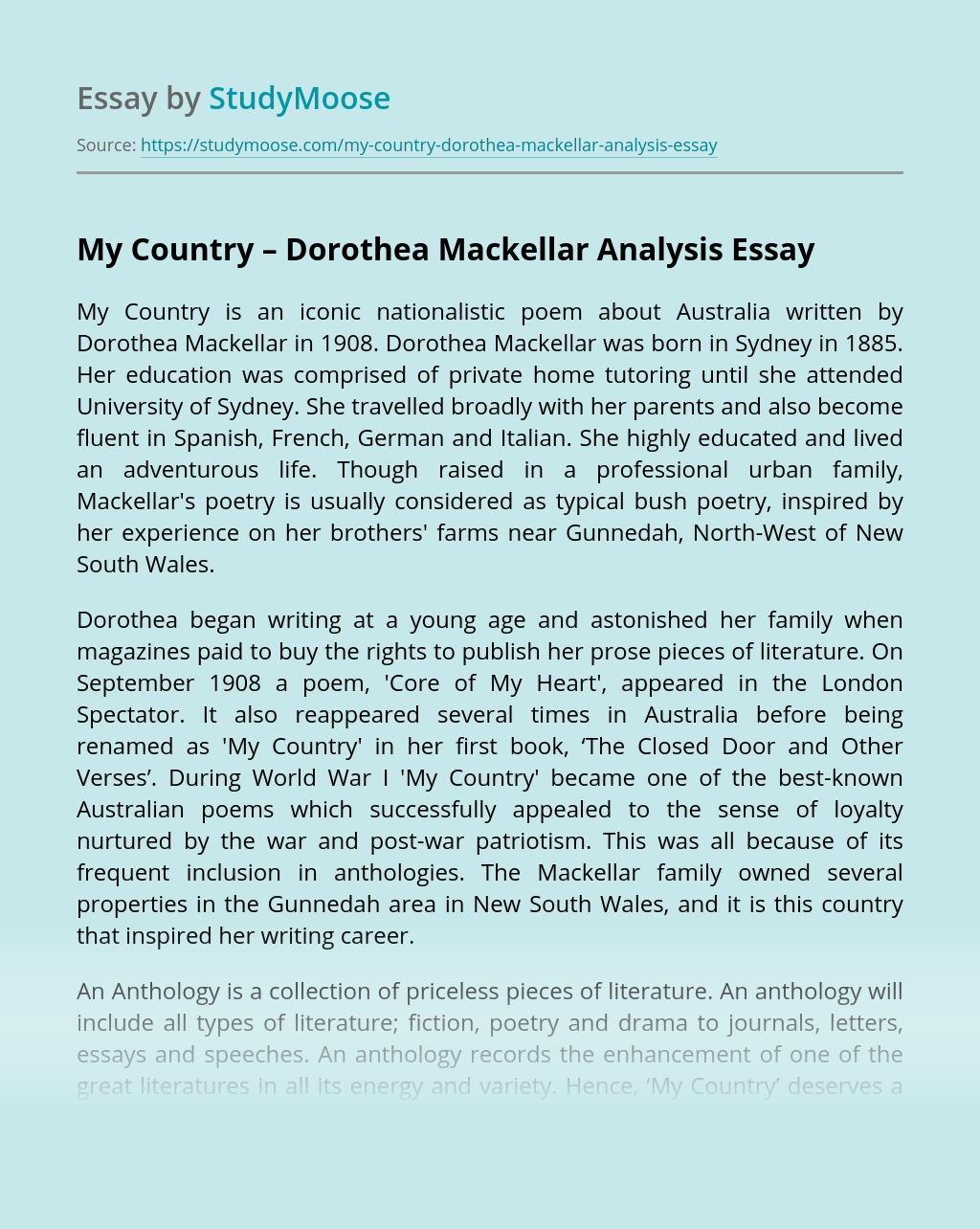 Analysis of I Sit and Look Out by Walt Whitman

I sit and look out” by Walt Whitman echoes all miseries and atrocities of life that rose to the surface in the wake of capitalism. 19th century witnessed a sea change in the lives of people as rat race for materialistic possession became more prominent and principles were relegated, concerns and emotions were sidelined from... VIEW ESSAY

The poem “Sonnet – To Science” written by Edgar Allen Poe was published by Hatch & Dunning in the poetry collection “Al Aaraaf, Tamerlane, and Minor Poems” 1829. Edgar Allan Poe, a renowned poet during the American romanticism, chose science as the central topic and how it is affecting poetry. Upon the first reading, the... VIEW ESSAY

Resolving London’s transport problems was the highest priority of the Mayor of London, Ken Livingstone. His goal was to create a world-class transport system that would improve business efficiency, supports greater economic prosperity and improves the quality of life for every one living in London or visiting London. The Mayor’s transport strategy, which was published... VIEW ESSAY

In Osoanon Nimuss’s poem, “Absolutely Nothing”, the speaker illustrates the constant progression of a child’s youthful optimism from a beaming blaze to a faded ember (“Innocence Vs. Maturity,” 2010) Most people who have read the book the Perks of Being a Wallflower may recall the poem within it entitled Absolutely Nothing by Osoanon Nimuss. The... VIEW ESSAY