Music of Cuba and Puerto Rico: A Comparison and Contrast

Music is an important aspect of both the Cuban and Puerto Rican cultures because music forms part of everyday life. To the people in these countries, music is a way of expressing unity and belongingness. The European explorers, particularly the Spanish, who came to Cuba and Puerto Rico (Thompson, 1991) enriched music in both countries. The music in these countries also became rich because of the influence of African slaves in the plantations (Sublette, 2004) who eventually become part of the community after slavery ended.

Don't use plagiarized sources. Get your custom essay on
“ Music of Cuba and Puerto Rico: A Comparison and Contrast ”
Get custom paper
NEW! smart matching with writer

The fusion of these influences made community life and music more interesting.

Type of Music The type of music in both Cuba and Puerto Rico evolved from the Spanish and African influences but the extent of influence differed. African percussion dance music has a stronger influence on Cuban music while Spanish classical and folk dance music had a stronger influence on Puerto Rican music. In addition, Puerto Rican music also borrowed much from Cuban music and music of the native Indians (Manuel, Bilb & Largey, 2006).

The single strong influence on Cuban Music and the more diverse influence on Puerto Rican music explained the similarities and differences in the type of music.

Sound The result of the combination of African, Spanish and indigenous culture led to diverse and enduring rich music. However, Cuban music has retained its original strong African percussion influence by findings its own path after the Spanish colonization ended while Puerto Rican music diversified further with the American influence. Cuba retained the traditional rhythms changing only with the use of modern instruments while Puerto Rican music further evolved into jazz, rock, rap and reggae (Manuel, Bilb & Largey, 2006) using modern beats and instruments.

Separation of historical development and modernization led to the divergence of music in these countries. Lyrics The lyrics of music in Cuba and Puerto Rico commonly focused on love and passion, courage and nationalism, and family and parental devotion (Manuel, Bilb & Largey, 2006). Cuba and Puerto Rico experienced African and Spanish influences on music lyrics. The African influence is more on call-response lyrics with a leader singing a call and the listeners responding to the call. The Spanish influence refers to the arrangement of words and phrases in artistic form such as in love songs and the national anthems of both countries.

However, revolutionary lyrics are more pervasive in Cuba since its national anthem is a call to battle while the national anthem in Puerto Rico is a celebration of independence. Musical Instruments There are three basic musical instruments common in Cuba and Puerto Rico, which are different types of percussion or drums, guitar or lute, and sticks tapped together (Thompson, 1991; Sublette, 2004). The difference is the widespread use of bass instruments and trumpets in Cuba that accompanied marches and dances and the more common use of flute and other indigenous musical instruments in Puerto Rico.

Religious Influences Religion is a strong influence in the development of music of both Cuba and Puerto Rico but the influences differed. African god worship using percussion music strongly influenced Cuban music while Spanish catholic prayer chants strongly influence Puerto Rican music. In Cuba, Santeria emerged as a religion combining the indigenous god worship and Nigerian god worship (Manuel, Bilb & Largey, 2006). With the Catholic influence, the saints had counterparts with the gods based on similar characteristics and worshipped similar to African gods.

In Puerto Rico, the slaves in the plantations adopted the chants taken from the Spanish Catholic mass (Manuel, Bilb & Largey, 2006) and used the lyrics or patterns for the call-response chanting in music. Furthermore, the fusion of the Spanish and African religious music led to religious music that is less solemn that in Catholic worship and less loud than in African worship of gods in Cuba. Political Influences Ideological or political struggle are common themes in Cuban and Puerto Rican music. However, the divergence in the political development of these countries created differences.

The revolutionary movement in Cuba created music describing social issues and armed struggle while at the same time discouraging superstitious beliefs, but with little success in discouraging folklore in music (Manuel, Bilb & Largey, 2006). The independence movement in Puerto Rico also used music to inspire action but the American influence comprised a differentiating factor. After the success of these movements, music became a source of identity and national pride. In Cuba, music also became a weapon of influence amidst the embargo by the United States and its allies. Conclusion

Music is a cultural artifact and cultural force for both Cuba and Puerto Rico. Music was a core part of the history of these countries. This will also accompany future direction. References Manuel, P. , Bilb, K. , & Largey, M. (2006). Caribbean currents: Caribbean music from rhumba to reggae. Philadelphia, PA: Temple University Press. Sublette, N. (2004). Cuba and its music: From the first drums to the mambo. Chicago, IL: Chicago Review Press. Thompson, A. F. (1991). Music and dance in Puerto Rico from the age of Columbus to modern times. Lanham, MD: The Scarecrow Press, Inc.

Music of Cuba and Puerto Rico: A Comparison and Contrast. (2016, Nov 26). Retrieved from https://studymoose.com/music-of-cuba-and-puerto-rico-a-comparison-and-contrast-essay 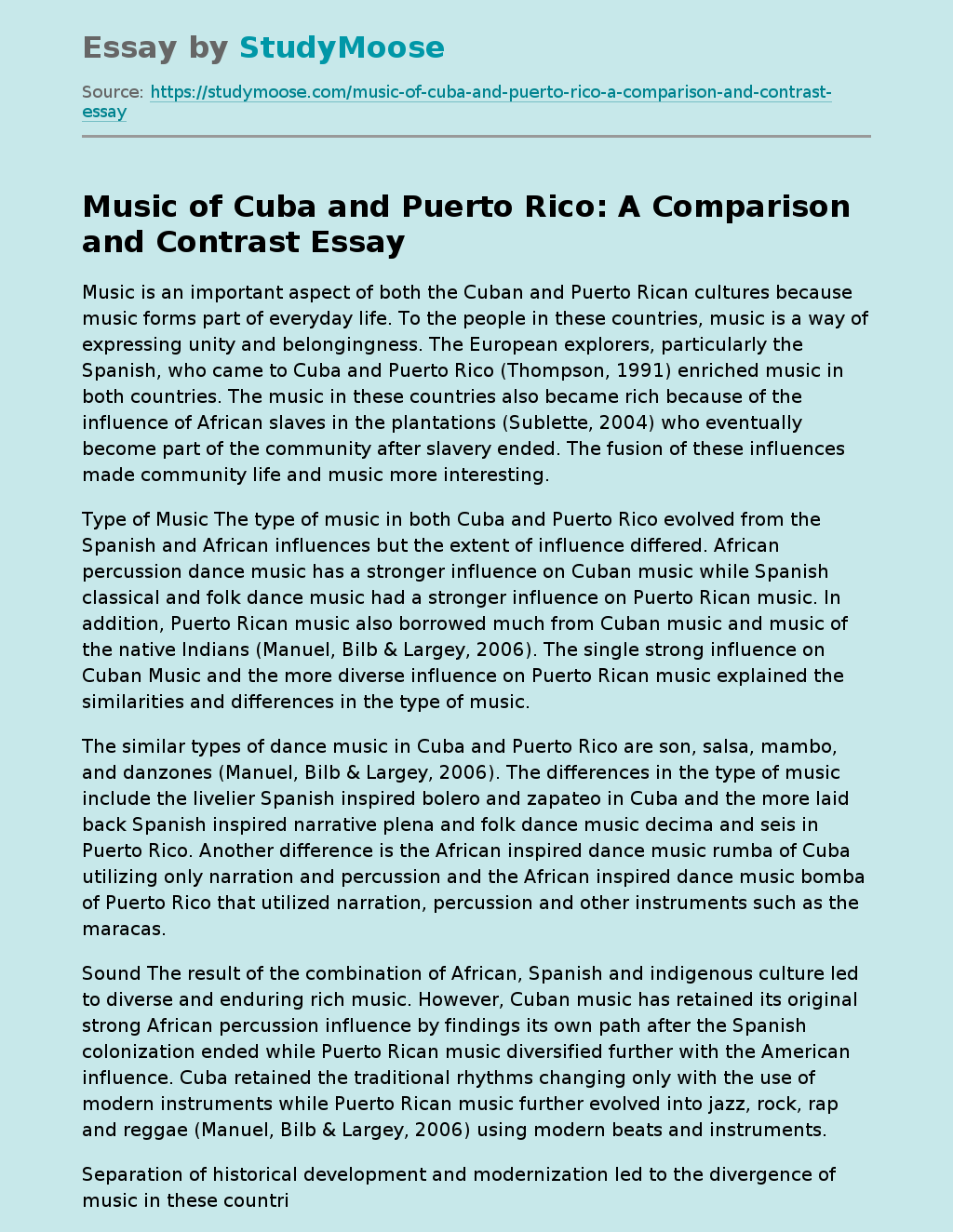