Moving into a New Apartment

A personal experience about moving into a new apartment.

Monig to Ankeny proved to be more difficult that I first expected. I had been looking forward to moving out of the house for over four years, and wxpected it to be easy and fun. Moving turned out to be neither easy nor very fun, as I had hoped it would be. I took us four trips to Ankeny just to get our apartment. First, we had to look at different apartments.

Don't use plagiarized sources. Get your custom essay on
“ Moving into a New Apartment ”
Get custom paper
NEW! smart matching with writer

At last, we had our apartment. Finally, it was August and it was time to move. Our original plan was to move everything at once with friends and family, but August became very bust. One week I went on vacation to Chicago. Then I had to go fishing for four days with my family.

Another weekend I went ot a friend’s house, who I met at Boy’s State, to see a rodeo. My roommate, Nathan, had a wedding ot attend.

Nathan worked from eight’o clock untill five thirty as a hired hand. I worked a virity of hours at the Dariy Queen usually over lunch and supper, which is when Nathan did not work. By the time we finished playing the messages game, we dicided to take our things to the apartment when we had time to go to Ankeny. Nathan and I had to by at DMACC on the same day for a financial aid seminar. So, we planned to help each other take the thins up to the apartment. Lucky for me he had already taken all of his heavy furniture on a previous visit. I had a hide-a-bed couch, a love seat, a desk, and other smallitems to take up to the apartment. I arrived at the apartment before he did, and my parents and I got the desk, love seat, and other small items up the three flights of stairs. Nathan finally arrived, and we started with the hide-a-bed couch. We took the seat cushions and mattress out. Because it was the first time ether of us had moved, we did not know that it is a good idea to tie down the hide-a-bed before moving it any small distance. Nathan was on one end of the couch, and I was on the other side. We had it up only one of the three floors, when it happened.

The adrenaline rush hit me, as I knew I was in danger. The netallic mass leapt fromits hiding place like a lioness on its prey. I jerked my head out of the way, but Nathan was much less fortunate. The bed bit him on the side of his mouth. He dropped the couch and let out a tremendous roar. The blood was a waterfall at it ran down his chin. He kept cleaning the blood off and tried to feel how big the hole was. His prodding around only made the whole on his lip bleed more. Nathan’s girlfriend, Sara was with us, saw the whole incident, and asked if he was all right. He went over to her and showed her his lip asking, “How bad is it? It’s bleeding everywhere!” Sara replid, “It would not bleed so much if you did not poke around at it.” He bit down on the rag, Sara had given him, and we took the couch up the last two floors. We now had everything moved into the apartment except for the clothes, food, and my stereo. I thought. When I arrived on August 25, I did not think I would be learning any new lessons until my first class. I had not written out a list of things I would need and in the confusion forgot several small items like pens, CD’s, and speakers for my stero.

Throughout the first few days I learned that if I want to do something, I had better write it down or it probably will not get done. When I had unpacked all of my clothes, I tried to call home to tell my mom that I had arrived in one peace; I discovered that AT&Thad not hooked up our phones yet. Nathan called the phone company and asked why the phones were not hooked up, because we had sent our deposit in a week earlier. the lady at the phone company was as worthless as keys locked in a car. He called again the next day, and another lady said she could have the phone hooked up by 5 p.m. I learned that if one complains enough, he can get what he wants or deservs. I have learned many lessons already and will learn many more before I finish college.

Moving into a New Apartment. (2020, Jun 02). Retrieved from http://studymoose.com/moving-into-a-new-apartment-essay 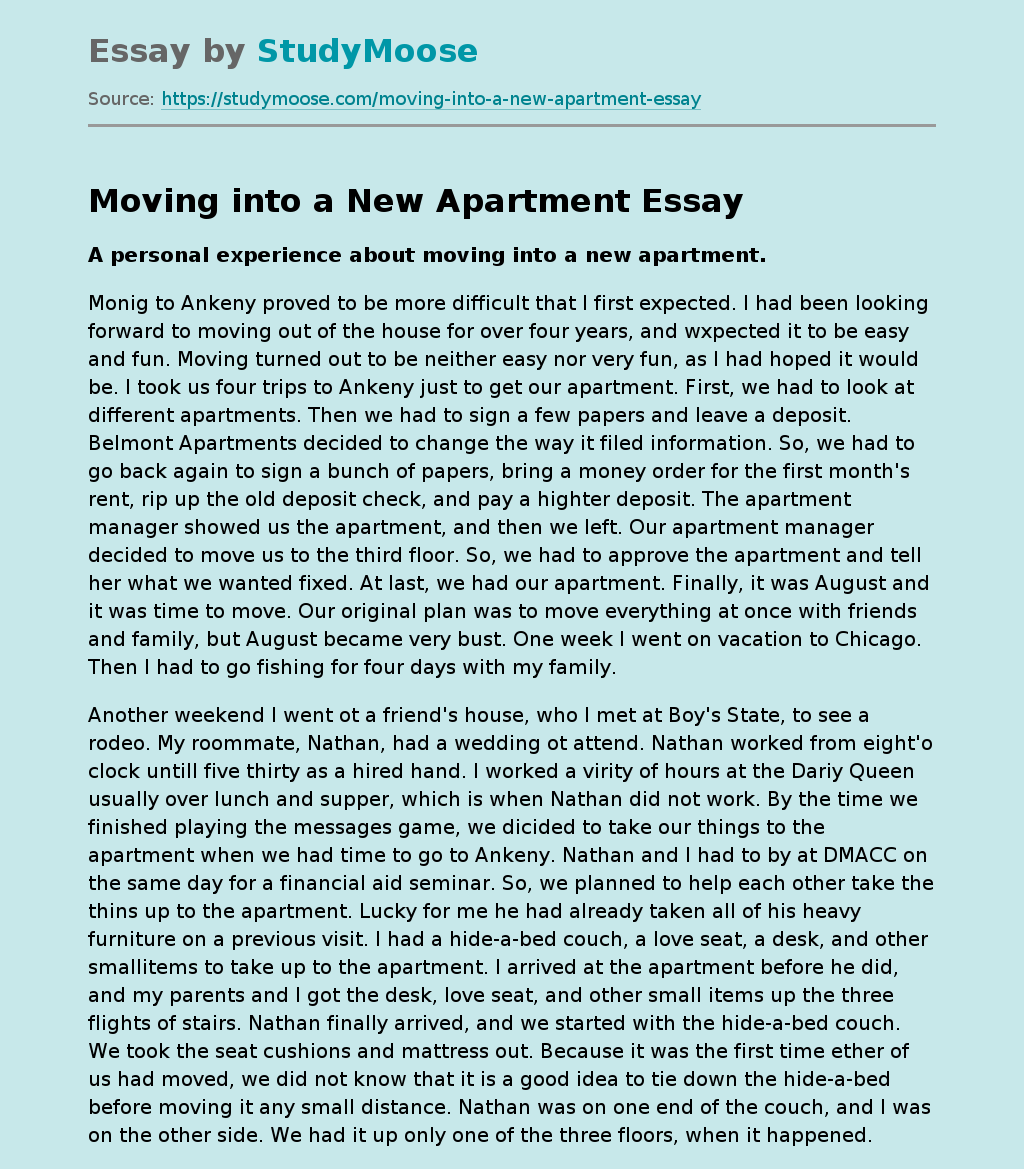