Most Powerful Enemy in Paradise Lost

Paradise Lost is an epic poem in blank verse, consisting of ten books with over ten thousand lines of verse and was written by the 17th-century English poet John Milton.

Don't use plagiarized sources. Get your custom essay on
“ Most Powerful Enemy in Paradise Lost ”
Get custom paper
NEW! smart matching with writer

The first version of Paradise Lost was published in 1667. Ironically you could say that John Milton writing this very epic poem itself in a way is disobedience to what was popular published works at the time. Milton created a work that reflected the “like-minded Protestant revolutionary readers who have presumably suffered and lost with Milton in the cause of liberty and religious nonconformity (Reisner, Noam.

John Milton’s ‘Paradise Lost’ : A Reading Guide, Edinburgh University Press, 2011).” During the 17th century, not writing stories inspired by Greek Muses, let alone is English, was unheard of. John Milton decided to go completely against the grain and write an epic poem with the Holy ghost as his Muse. Milton used Christian stories from the bible as his focus. Milton even went a step further from not just writing about Greek and Egyptian pantheons, but to also refer to them as demons. This drastic change of style from what was popularized at the time did not stop John Milton from writing this epic poem the would change the literature world forever, but also have that time in literature be referred as the Milton Era.

Right at the beginning, Milton addresses the theme of disobedience that will continue throughout the epic poem by saying verbatim “ Of Mans First Disobedience, and the Fruit Of that Forbidden Tree, whose mortal tast Brought Death into the World, and all our woe, With loss of Eden, till one greater Man Restore us, and regain the blissful Seat (Book I, 1-5).” this quote is better understood when translated to plain English as “Tell me about man’s first sin, when he tasted the forbidden fruit and caused all our troubles, until Jesus came and saved us.” The reader is able to swiftly connect John Milton’s epic poem to the Story of Characters in the bible, Adam and Eve, who were the first humans to bring sin into the world and ultimately lead to Jesus having to come down to earth to save mankind. This opening also foreshadow later events that will undergo later in the poem caused by disobedience and is one of many exemplary of Milton’s theme of Disobedience that will be continued to be discussed throughout the paper.

John Milton had a unique style to start in the middle of the action instead of creating a base or build-up. The reader is able to view this style by the opening of the epic poem. Paradise Lost begins with the aftermath consequence of the first venture of disobedience to occur in the universe Milton created. As Milton’s speaker is asking the holy spirit how sin came into the world, the holy spirit tells the story of Adam and Eve. The Holy Spirit then sums the creation of sin in the world as being caused by one particular person, Satan. Now that Milton has introduced the main character, he jumps to Satan’s current predicament. Satan who is talking with his many followers down in hell, who were cast out of heaven after disobeying God, says “The force of those dire Arms? yet not for those, Nor what the Potent Victor in his rage Can else inflict, do I repent or change (book I, 94-96)” which basically is Satan grumbling about his constant suffering and how he does not repent his actions of defiance.

Satan wanting more power then he already had, so he called out God. This led to a war with God and Satan ultimately lost. That operation got Satan and the other fallen angels thrown out of heaven and placed in hell where there is “ No light, but rather darkness visible Serv’d only to discover sights of woe, Regions of sorrow, doleful shades, where peace and rest can never dwell, hope never comes that comes to all; but torture without end.” God’s punishment of Satan and his followers however, only gave Satan fuel to promise “ Whereto with speedy words th’ Arch-fiend reply’d. Fall’n Cherube, to be weak is miserable Doing or Suffering: but of this be sure, To do ought good never will be our task, But ever to do ill our sole delight, As being the contrary to his high will Whom we resist ( book I, 156-162).” which translates to never doing good again, doing the opposite of what God wants. This act of disobedience is tremendously important because its a mutinus act against the greatest good of the universe and also the culprit to all the other ruins to occur in the poem.

As continued in Milton’s book II, Satan is still planning with his other fallen followers in hell how to plague God. However, it isn’t till book III that Satan hears about God’s new world he’s creating. Satan then devises the plan the corrupt the people that will populate that world and make them sin so that God will also have to cast them out as well and Satan will be able to successfully bring sin into the world. Milton still having the poem spoken through the perspective of the holy spirit, it says “In blissful solitude; he then surveyed Hell and the Gulf between, and Satan there Coasting the wall of Heav’n on this side Night In the dun Air sublime, and ready now To stoop with wearied wings, and willing feet On the bare outside of this World ( book III, 69-74)” translating to God saw that Satan was planning to attack the new world. As continued in book IV the holy spirit says “Satan, now first inflam’d with rage, came down, The Tempter   Accuser of man-kind, To wreck on innocent frail man his loss Of that first Battel, and his flight to Hell (book IV, 9-12)” translating to Satan’s plans to take his revenge out on the people of Earth and drag everyone down to hell with him. This act of disobedience is important because it is another place Milton shows Satan freely choice to continue to defy God, how instead to coming to repent, Satan is still choosing to find other ways to be insubordinate.

An interesting turn that Milton addresses in the poem is not only to hell Satan must forever live at, but the own internal suffering Satan must face from the choices he commited. Even when Satan was out of hell and on God’s new world, he could not fight the feeling that he was still in hell, only this hell was mental. Satan is “stuck with painful memories of the glory he once had and how terrible his situation had become (in plain english).” this caused the villain in this poem to have some character growth “Till Pride and worse Ambition threw me down Warring in Heav’n against Heav’ns matchless King: Ah wherefore! he deserved no such return From me, whom he created what I was In that bright eminence, and with his good Upbraided none; nor was his service hard (book IV, 40-45),” because in this quote, Satan is questioning his own selfish actions that took him away from greatness. Nevertheless, Satan is quickly stuck back in his old ways and devises the plan to have mankind fall.

The next act of disobedience to undergo in the poem is through the Adam and Eve story that had been foreshadowed in the beginning. Gods one command for Adam and Eve not to break was ‘But of the tree of the knowledge of good and evil, thou shalt not eat of it: for in the day that thou eatest thereof thou shalt surely die (The First Three Chapters of Genesis: Principles of Governance Stated Narratively).” Although God can already see Satan’s plans of destruction “Hinder’d not Satan to attempt the mind Of Man, with strength entire, and free will arm’d, Complete to have discover’d and repulst( book X, 8-10),” but as translated doesn’t stop him because he aquipted man with the most power thing to defend themselves, free will. Eve chooses to use the gift of freewill to be the first one to disobey God. A snake that has been possessed by Satan tempts Eve to eat the forbidden fruit and Eve gives in and then so does Adam. All because of Satan’s desire to bring as many people down with him as possible to upset his enemy, God, He brings sin into the world by persuading Adam and Eve’s actions. This, however, is not the only downfall to happen from a single action. God now must cast both Adam and Eve from the garden of Eden and “now [he] have to pass sentence on him, which will be death .”

Throughout the book of paradise lost, its theme from start to finish is based on the constant disobedience of the characters.

Most Powerful Enemy in Paradise Lost. (2021, Apr 20). Retrieved from https://studymoose.com/most-powerful-enemy-in-paradise-lost-essay 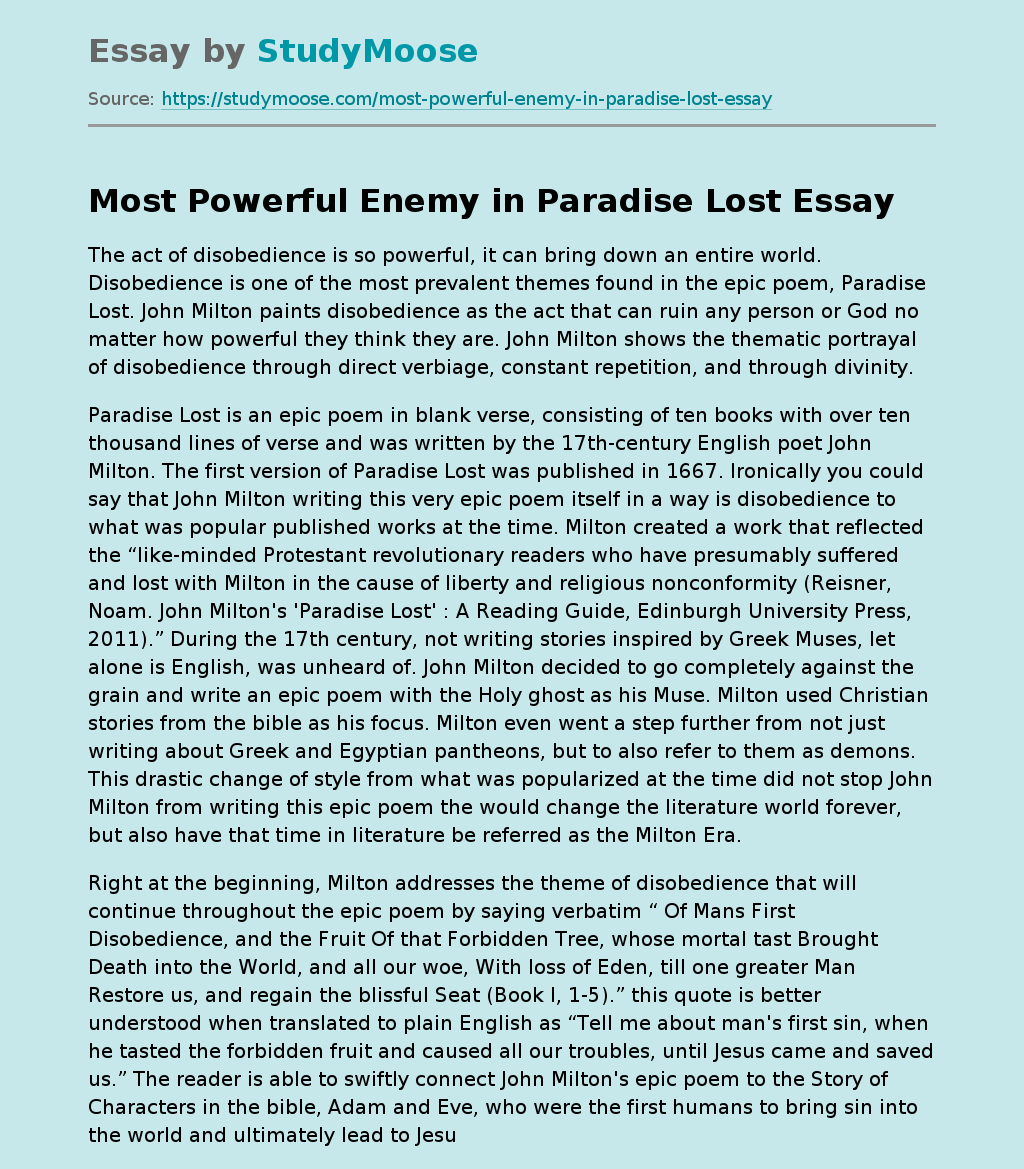