Get a verified writer to help you with Misuse of power

Abigail Williams Misuses her power extensively throughout the play. She has most of the adults in Salem believing that she is a sweet innocent girl and so is never accused or suspended of doing anything sinful or unlawful. She also has most of the girls of Salem obeying her, due to a mixture of respect and fear, fear of Abigail and also a fear of getting in trouble for the dancing.

The women of Salem are also afraid of Abigail as she could quite easily accuse them of witchcraft with no questions asked, as she is known to be sweet and innocent.

Abigail then begins to threaten Danforth with how hell could take him in: “think you be so mighty that the power of Hell may not turn your wits? Beware of it”. Danforth then seems to be wary of Abigail in the next reply to her, the book describes what he says as ‘apprehensively’. Danforth has began to be aware of what Abigail is doing and decided to not get in her way or upset her, as he didn’t want her to accuse him of being in contact with the Devil. If she did this it would be him on trial as well as all the others. Another point about Abigail is that she is a liar and she is very good at it.

This is how she is so respected by some people and feared by others. In my opinion the reason Abigail is so manipulative and weird, and also seems to have no feeling or a conscience, is because her parents were murdered by Indians in front of her. She describes this to the girls in a hard-hearted way, which shows that her emotions have all been drained apart from her love/lust for proctor and her jealously of Elizabeth. Reverend Parris misuses his power in The Crucible because he does not think the townspeople of Salem respect his position as ‘a man of God’.

The Churches power at that time was very strong and so Reverend Parris has no problem in using his power the wrong way. The way in which he misuses his power is mostly from the pulpit of the church in his sermons. He believes that the church is the authority of all people in the town. He also believes himself an authoritative figure. He believes that anyone who does not commit his or her lives to the church should be questioned. He also demands that the people of Salem are obedient to the church and himself. He says that if they are not obedient, then they will burn in hell.

Reverend Parris preaching things like this in his sermon strikes fear into the townspeople, as they begin to think Hell is upon them and this causes chaos to break out, as they begin to yell and scream at one another. Reverend Parris hates to be wrong, in the courtroom even when he realised that he is wrong to accuse all the people involved, he still sticks to his beliefs however wrong they may be. Parris causes innocent peoples deaths all because of his beliefs, stubbornness, selfishness and his misuse of power.

I have reached the conclusion that the characters in The Crucible do misuse their power; the two characters I chose demonstrate this theory very well. Not all the characters in the play do, but there are many characters that do. This selfish act of misusing power in The Crucible is very influential to how the plot develops. Without Abigail Williams acting like a selfish, irresponsible strumpet, or Reverend Parris being selfish and power-hungry The Crucible would have lost its whole page-turning ominous, experience.

Get a verified writer to help you with Misuse of power 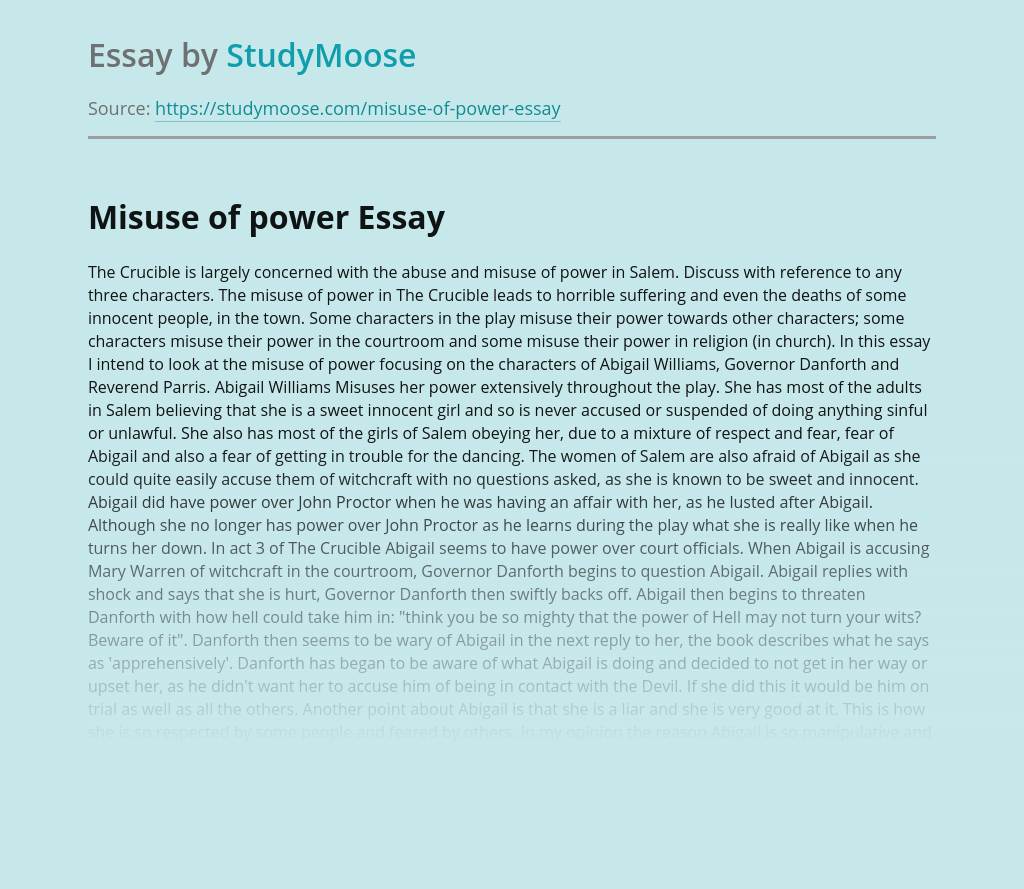 The Crucible is a study of power

Symbolism in the Crucible

The Doll – What original started of as an innocent gift from a scared little girl turned into tangible evidence to put poor Mrs. Goody Proctor away for good. Mary Warren, a feeble minded follower who almost has a heart, manages to do something admirable by making Goody Proctor a nice doll. Later in the...

Get Essay
Individual Moral Integrity In The Crucible

Individual moral integrity and the lack thereof are illustrated by Arthur Miller in his play, The Crucible. The fear of witchcraft engulfs the Puritanical society thus creating a mob rule. The fate of the town depends upon the morals of its people. John Proctor and Reverend Hale are key players in condemning the Witch Trials;...

Appearance vs Reality in The Crucible

Appearance vs. Reality is a prominent theme in The Crucible as some people are carried and blinded by appearance while others actually look at the facts, John Proctor and Elizabeth are not carried away by lies while Abigail and the rest of her friends are ignorant and spread lies. The town of Salem, Massachusetts went...

Mary Warren is a young servant girl whose ethics are challenged when she becomes afflicted with terror and intimidation. She is a maid for John Proctor, and becomes involved in the Salem witch hunt as one of the accusers, led by Abigail Williams. Mary Warren is a very weak person in the play, who gives...

Common sense in 'The Crucible'

An Exploration of the Fear of Losing Reputation

An exploration of the fear of losing reputation within the Salem Society. Good afternoon, today I will be presenting my IOP. I have chosen to base it upon Arthur Millers’ novel ‘The Crucible’, which references back to the Salem Witch trials in 1692. There are many themes in Arthur Miller’s ‘The Crucible’, like intolerance, empowerment,...