“Miss Brill” is a short story published in1922, in which Katherine Mansfield, the author gives great insight into how isolated individuals can begin to twist their perception of the world around them, eventually leading them to unintentionally contradict their loneliness and causing their false perception of the world to collapse and become estranged. Miss Brill, the main character is a middle-aged, unmarried English teacher who lives by herself in an apartment in France. Miss Brill owns a treasured fur which she wears around her neck every Sundays at three o’clock when she goes to the park.

Don't use plagiarized sources.
Get Your Custom Essay on Miss Brill Just from $13,9/Page

The lonely foreigner strolls around the park and has become quite an expert at eavesdropping on other people’s conversations while creating artificial connections or relationships with the people around her. The short story focuses on one particular Sunday afternoon where Miss Brill is forced to step out of her delusions and face reality after her illusions were shattered by the remarks of a young couple.

A good example of that would be when Miss Brill suddenly realized that the people who sat at the bench next to her all seemed odd, silent and old which ironically reflects on her situation although she does not see it at them time. According to short stories for students, “Miss Brill is told in a third-person, stream of consciousness narrative, a common device in Mansfield’s works which serves to heighten the story’s psychological acuity and perceptive characterization. Though narrative is in third person, the stream of consciousness technique allows the reader full access to nothing but Miss Brill’s thoughts.” This shows us that the point of view is extremely critical to our understanding of Miss Brill’s character and what she is all about. At the beginning, readers perceive Miss Brill’s excitement and mood as pleasant when she describes the blissful weather and her surroundings. “Although it was so brilliantly fine-the blue sky powered with gold and great spots of light like wine splashed over the Jardins Publiques –Miss Brill was glad that she had decided on her fur”. At this point conclusions can be drawn that the fur is somewhat connected to its owner because they are both advanced in age and live in a “dark room or cupboard” where they get to come out of every Sunday.

In the first few paragraphs readers get the sense that Miss Brill is quite pleased and satisfied with her current lifestyle and readers also comprehend that Miss Brill has indeed found a way to compensate for her solitude by sitting in on other people’s lives. We can articulate for sure that Miss Brill is delusional when she refers to herself as an actress in a fantasized play. Miss Brill believes that she somehow serves a purpose when she goes to the park every Sunday and if she did not show up for her role someone would notice. This fantasy is abruptly cut short when a young couple insults her and brings her back to reality. One critic, Robert L. Hull argues that Miss Brill’s world is more than lonely: he claims that it is also an existential world in which she finds herself in complete solitude estranged from God, man, and importantly from herself. The critic goes on and states that the primary theme of “Miss Brill” is that of estrangement, estrangement from love, which Mansfield admits in a letter to John Middleton that it was the primary reason for writing Miss Brill.

I completely agree with Robert and I think that Miss Brill was not just lonely, her life made no meaning whatsoever. In a traumatic conclusion, Miss Brill’s life was changed drastically from that one encounter with the young couple. She will never be the same again after that day; the young couple did more than just hurt her feelings, in a way they took away her innocence. To Miss Brill the Sunday the outings was more than just eavesdropping at other people or being noisy, it was the one harmless thing that made her happy, sort of like a guilty pleasure. Finally, Mansfield leaves the readers wondering what would happen next to Miss Brill, would she continue with her normal Sunday routine or was she so traumatized that she wouldn’t dare go back to the park. 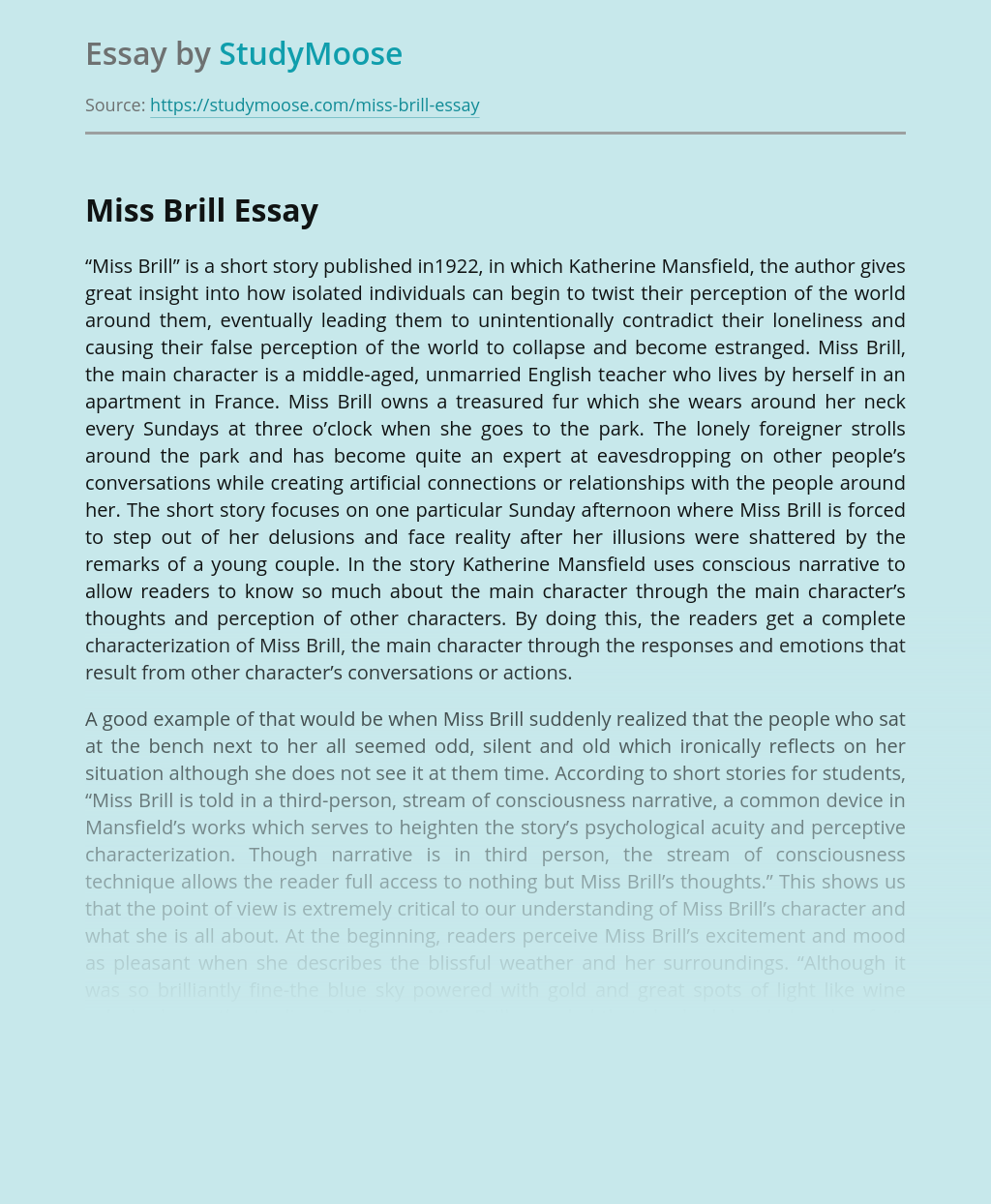 For my midterm narrative review, the 2 stories I selected to read were: 1. O. Henry’s, The Ransom of Red Chief (because I was in the play version of the story in high school) and 2. Stephen King’s, Suffer the Little Kids (since I actually like Stephen King). The one I chose to blog about...

How does Robert Louis Stevenson explore the duality of human nature in Dr Jekyll and Mr Hyde?

1) In Cold Blood is a non-fiction novel, but how is it more like journalism than an ordinary work of fiction? Truman Capote wrote the book in brief sections, setting the scene and then putting a break in the narrative, the way the book is structured with several plotlines happening at the same time it...

?Both Robert Frosts “A Road Not Taken” and “Stopping by the Woods on a Snowy Evening” are about making choices, affecting life. The both reflect on the human nature of questioning one’s self and one’s decisions in life. In “A Road Not Taken” it seems as if the speaker is upset that they had not...

”The Arena” is a short story written in 2008 by Martin Golan. The story takes place in the suburbs of New Jersey where the protagonist lives. There is special focus on the main character, who is the father of two children, and who has experienced the worst in his life; when he lost his son...