In the short story Gryphon, Charles Baxter creates a far-from-perfect character, the substitute teacher Miss Ferenczi, who lives in a fantasy world without boundaries and tiresome limits. Her arrival has a great influence on the whole rural Five Oaks community. Miss Ferenczi’s appearance and behaviors, portrayed through her student’s eyes, place her as a symbol of reformation and immerses her students into a rich and fascinating world.

Don't use plagiarized sources. Get your custom essay on
“ Miss Ferenczi in Short Story Gryphon ”
Get custom paper
NEW! smart matching with writer

Unlike other boring normal substitute teachers the children are used to, she comes in with her purple purse and checkerboard lunchbox signaling the beginning of an unusual experience. As she walks to the blackboard, picking up pieces of white and green chalk, she draws a large oak tree on the left side of the blackboard saying the class needs this tree in it. This first scene alone has already created a mystic fog about the new teacher’s behavior and personality.

She then tells the class about her royal Hungarian ancestor, which adds more to the strange atmosphere. She was proud of her mother being a famous pianist who succeeded her first concert in London for “crowned heads.”

The way she nostalgically looks up to the ceiling, makes the students follow her eyes but see nothing except for ceiling tiles. Her actions are far more than what fourth graders can possibly understand. This is the start of strange events following in the plot. However the most remarkable detail is her physical appearance: “her face had two prominent lines, descending vertically from the sides of her mouth to her chin.

” This abnormal feature is foreshadowing for what happens later on and also a hint at an unreal, numinous personality. The two lines remind Tommy, the little narrator, of Pinocchio. The comparison of Miss Ferenczi to this character is foretelling of her later unreliability of her words, since, like Pinocchio, her nose is also prone to extend. The students later on question on the truthfulness of Miss Ferenczi’s lessons. Moreover, Pinocchio is a product of imagination, as Miss Ferenczi living in her unreal world.

Miss Ferenczi is also well portrayed through her lectures. The first incident is when John Wazny is doing the multiplication table. As another boy pointed out Wazny said six times eleven is sixty eight, and the right answer should be sixty six. Miss Ferenczi on the other hand tells them the answer of sixty eight is also right, “when I am in the room.” She encourages the children to form their own perspective of life and tries to make them break out of the rules and norms other adults created. Mr. Hibler, as well as any other teacher would tell the kid that math, as a science, is facts which cannot be bent. In contrast Miss Ferenczi simply states “It’s more interesting that way” to explain her odd answer. She exposed her class to “substitute facts,” things perceived out of ordinary and accepted by the minority or even just an individual. Being with the majority does not mean it is right; there is always another solution for every happening in the world.

The utmost influential image is the gryphon when Miss Ferenczi talks about the Egyptians. The magical creature is half lion half bird, which represents Miss Ferenczi herself in this story. The things she tells the students are half truth, and half myth or even unreal. She tells them about the plant that eats meat, which is a fact. She mentioned the sea creatures that are as thin as pancakes and cannot be studied as they will explode in the normal pressure air, which could be the truth. However there is other information which remains to be doubtful, such as Beethoven pretending to be deaf, the Hope diamond’s curse etc. Some are even personal views or beliefs, for instance the comment on the genders and planets control over behaviors. The point is gryphon makes people imagine and long for the other side of the dream world, and broaden their mind, like how Miss Ferenczi makes the children start to form their own thinking.

In addition, Miss Ferenczi is unique in her behaviors and reaction with the class. She seems to be strict at the first moment when she first gathers the boy to settle for lecture. However she reveals her sweet side when choosing to have lunch with the kids. She claims other teachers seem to lack ideas, which means they are boring and all the same. She gently warns the children about choosing their food and she tells the stories to them because she knows they like “these secrets”.

Miss Ferenczi’s appearance, throughout the three times she teaches in class, gradually changes as well. She first had an elegant chignon, and then on the second day her clothes were of bright green blouse and pink scarf with her hair done into a pigtail held by red rubber bands. Finally the last day she goes to the class, her hair “hung straight down and seemed hardly to have been combed.” The way her appearance changes shows as she goes on the more she gets away from the reality and the ordinary.

The climax of the story is when Miss Ferenczi read the fate for the students through her Tarot cards. She reads the cards for several children, and when it comes to Wayne Razmer, the little boy gets a Death card. She tells him the card means he will soon face his fate, but as she mentions earlier, death is not the end; it is just a new beginning. Her motivation on telling to boy about his fate is not to scare him, but to tell him not to fear of what will come on his way. However this action is to the extreme and inappropriate with elementary children, despite her good intentions. At the end of the story Miss Ferenczi has gone too far from the reality world, where the boundaries trap her dream. She lives in a different world, of Gryphon, Sphinx and all beautiful miraculous creatures. Perhaps she does not belong to Five Oaks, where people like Tommy’s mom, Mr. Hibler and others cannot accept such imaginative and individualistic thinking and ideas. Miss Ferenczi is fated to leave the school, as the society not yet realizes the importance of her innovative dreams.

As Miss Ferenzci said to the children, “angels live under those clouds” and they are among us. Angels are everyone inside these children, if they allow their imagination to fly; they will soar up and reach the peak of understanding of themselves and the world. Though she may not be perfect, Miss Ferenczi symbolizes change and creativity that human beings should not put limits on. Dreams and beliefs are the only resources that we never lack, and the teacher in Gryphon changes her fourth grade students, help them wonder and reach out to new concepts. 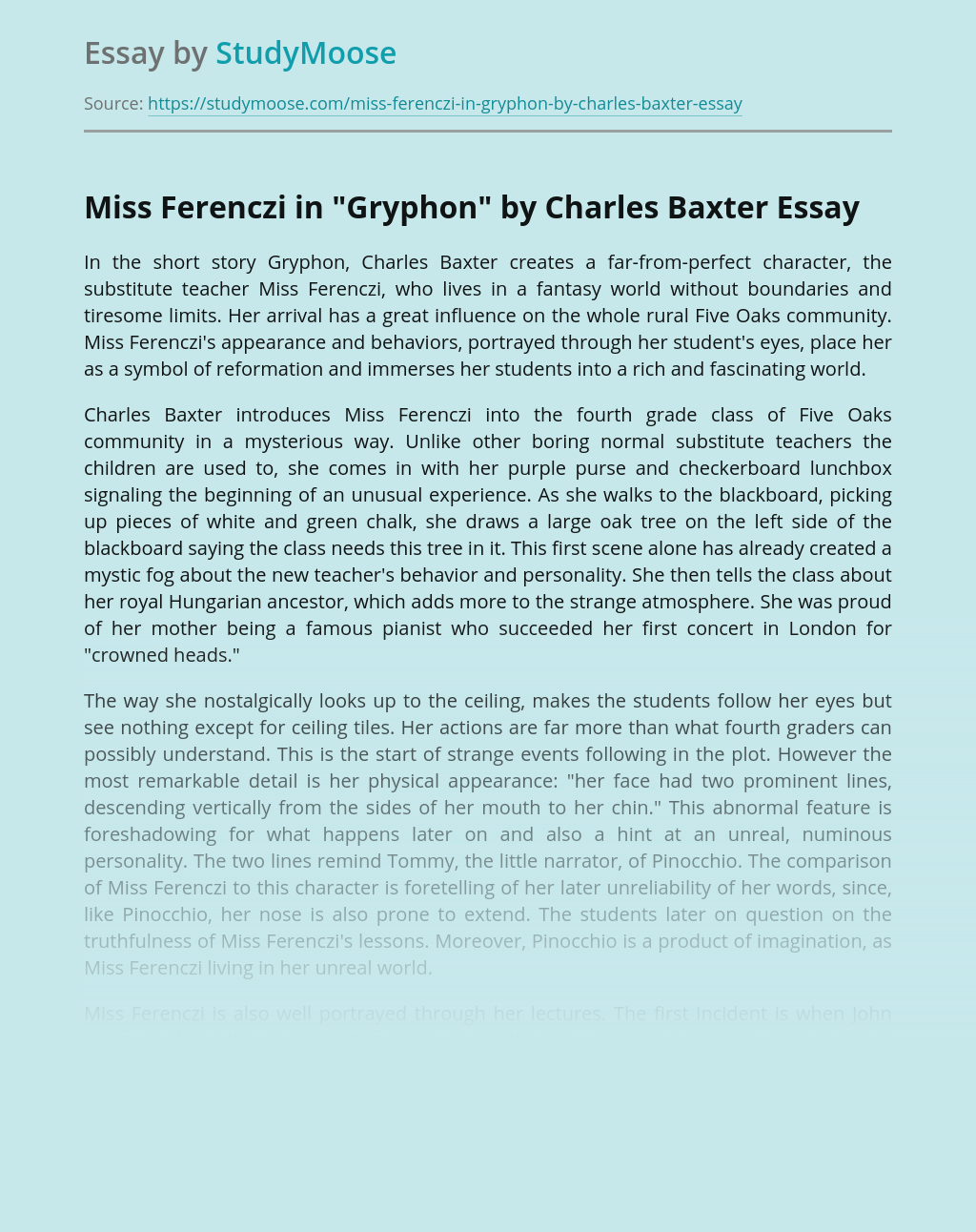