In the history of the United States, the legislative branch of government has developed systems of laws which the judicial branch of government checks. Because of modernization, the constitutionality of these laws needs to be reevaluated from time to time. There have been many cases that have caused the government to amend certain laws to protect its citizens. One of the most important cases that was brought to the Supreme Court was the case of Ernesto Miranda V the state of Arizona.

Don't use plagiarized sources. Get your custom essay on
“ Miranda V Arizona ”
Get custom paper
NEW! smart matching with writer

This case caused the government to add more to the Fourth, Fifth, and Sixth amendments to the constitution (The Supreme Law of the Land).

Miranda V Arizona was a landmark case in the United States Supreme Court because it established the constitutional liberties for individuals suspected of committing crimes. In Phoenix, Arizona, during 1963, Ernesto Miranda was arrested and charged with the rape, kidnapping, and robbery of an eighteen year-old, semi retarded woman (Mount). After his arrest, Ernesto Miranda was interrogated for a session lasting about two hours, where at the end, he confessed to these charges (McBride).

The police, who had not reminded Miranda of his rights before his interrogation, recorded the whole session and used his confession as the sole evidence to convict him (McBride). At the end of his trial, he was convicted of rape and kidnapping of the eighteen year-old and was sentenced to twenty to thirty years in jail (McBride). Miranda and his attorney appealed the case and had it brought to the Arizona Supreme Court with the excuse that the police obtained the confession illegally (McBride).

The Arizona Supreme Court agreed with the lower court.

Miranda then appealed the case to the United States Supreme Court which heard the case in 1966 (Mount). After hearing Miranda’s case the Supreme Court took a vote. The decision was five to four in favor of Miranda (McBride). The reasoning behind the Supreme Court’s decision was that the police had not properly informed Miranda of his rights before the interrogation (Miranda). “The current practice of incommunicado interrogation is at odds with one of our Nation’s most cherished principles—that the individual may not be compelled to incriminate himself.

Unless adequate protective devices are employed to dispel the compulsion inherent in custodial surroundings, no statement obtained from the defendant can truly be the product of his free choice. ” This quote by Chief Justice Earl Warren demonstrates that the practice of interrogation without advising people of their protection under the Bill of Rights (the first ten amendments of the United States Constitution) is unconstitutional and allows people to incriminate themselves.

The requirement by the court that law enforcement officers convey these warnings to criminal suspects is taken from the Fourth, Fifth, and sixth amendment. The fourth amendment, protection against illegal search and seizure, states that police are required to have a search warrant in order to search one’s home or personal items. They also must have probable cause to obtain the warrant (Mount). The Fifth Amendment to the constitution, protection from self-incrimination, means that no one is forced to be a witness against themselves in a court of law (Mount).

The Sixth amendment, the right to the assistance of an attorney, states that if the suspect charged with a crime wants a lawyer to represent him, he may call his own, or if he cannot afford one, he will be appointed one by the courts (Miranda, 1). Another reason the Supreme Court decided that not reading suspected criminals their rights is unconstitutional is because most of the time the police took advantage of people not knowing their rights (Mount). An example of this is the case Miranda vs. Arizona. The most important reason behind the courts decision in the favor of Miranda was to protect its citizens from the government (McBride).

The impact of the Supreme Court’s decision was to increase the rights of citizens suspected of crime using the “Miranda Rights”. You have the right to remain silent. Anything you say can and will be used against you in a court of law. You also have the right to the presence of an attorney; If you cannot afford an attorney one will be appointed for you prior to questioning if you so desire(Miranda). These rights (Miranda rights) must be stated to a suspect prior to interrogation by a law enforcement officer (Larson). If hese rules are not followed and the officer does not read the suspect his rights before interrogation the Exclusionary act goes into effect. The Exclusionary act states that any illegally obtained evidence must not be allowed in a court of law (Miranda). Although this Supreme Court decision supported the rights of criminal defendants, there are a few exceptions to these rules. The Supreme Court ruled that “Miranda rights are not necessary prior to questioning that is reasonably prompted by a concern for the public safety. ” This is called the Public Safety Exception to the Miranda Rights (Miranda).

An excellent example of this would be the Supreme Court case of New York Vs. Quarles in the year 1983. In this case, a police officer received a description of Quarles and upon finding him, the officer searched him, and found that he had an empty gun holster. The officer then questioned him about the whereabouts of his gun. When Quarles responded, the officer arrested him, then read him his Miranda Rights. During his trial, the judge ruled that his statements made before his rights were read to him were allowable in court because it was an issue having to do with public safety.

The court ruled in favor of New York five to four (New York). The Supreme Court also states in its rulings that the suspect must be in police custody or under police interrogation for him to have his Miranda Rights read to him(Miranda). Another case affected by the Miranda case was Illinois V. Perkins. In this case, Perkins, while incarcerated in an Illinois prison, confessed to two undercover agents that he had committed a murder. Perkins was then tried and convicted of this murder. Perkins argued that this violated his Miranda Rights and because of this he should be acquitted from the charges brought upon him.

The court decided that it was perfectly acceptable because the questioning of Perkins was not done in a “police dominated atmosphere where compulsion to confess is present” (Illinois). The Supreme Court case of Miranda verses Arizona was a landmark case because it gave more rights to suspected criminals. The ruling in favor of Miranda gave criminal defendants more rights and expanded civil liberties for everyone. This case also gave the Bill of Rights more influence and power. Overall, the case of Miranda V. Arizona was very important to the history of the United States and set precedents for future cases in the judicial system. 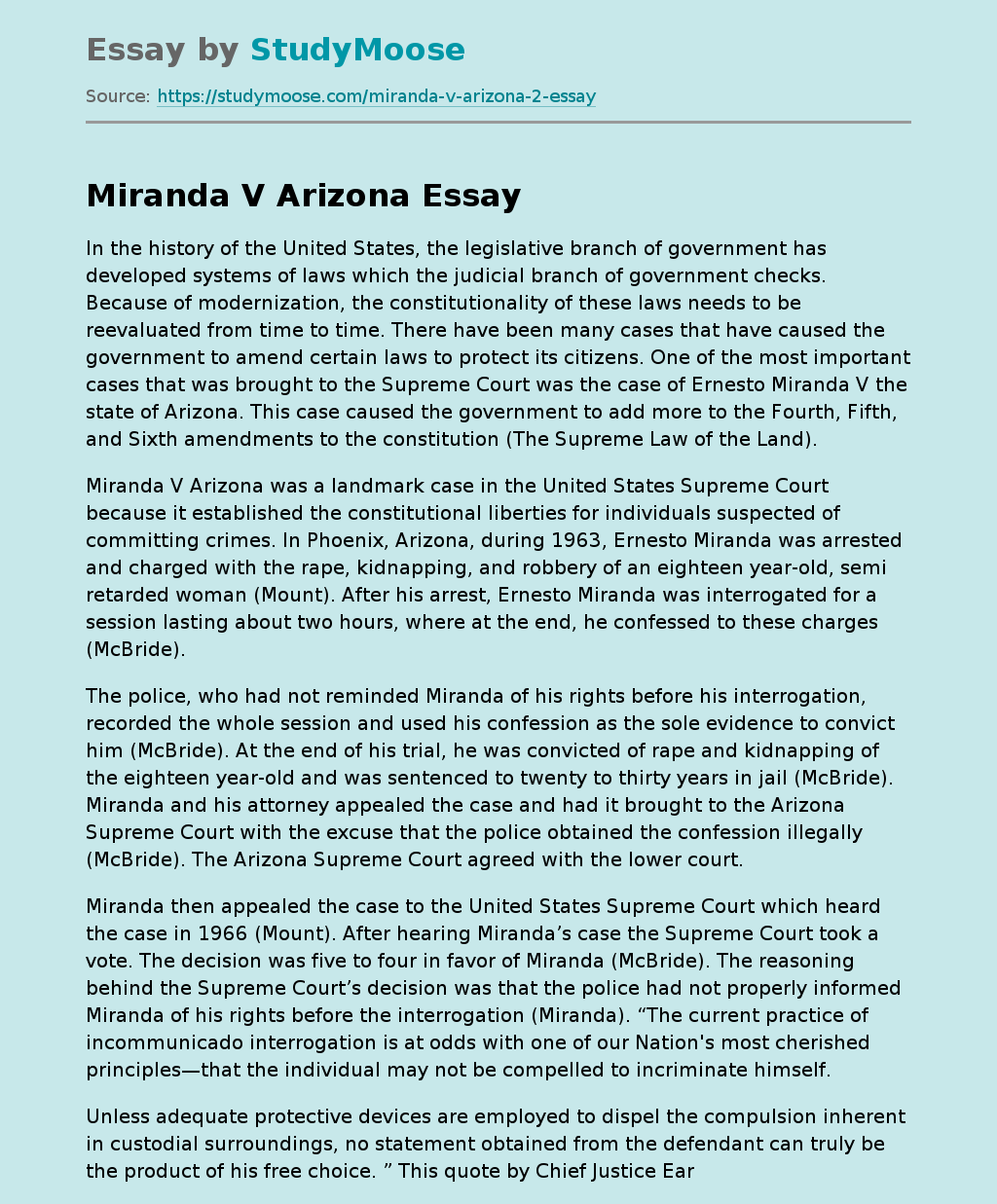