The term ‘mimesis’ is loosely defined as ‘imitation’, and although an extensive paper could be written about the cogency of such a narrow definition, I will instead focus on Plato and Aristotle’s contrasting judgements of mimesis (imitation). I will spend one section discussing Plato’s ideas on mimesis and how they relate to his philosophy of reality and the forms. I will then spend a section examining Aristotle’s differing views on mimesis and how it relates to catharsis. During this deliberation I will prove that as with much of their philosophies, Plato and Aristotle disagree on the concept of mimesis.

Don't use plagiarized sources. Get your custom essay on
“ Mimesis: Plato and Aristotle ”
Get custom paper
NEW! smart matching with writer

Plato saw mimesis as deceitful and dangerous; Aristotle saw it as cleansing and educational. In book X of The Republic, Plato uses Socrates and Glaucon as artifacts for contemplating the idea of mimesis. In the dialogue, Plato makes it apparent right from the beginning that he has negative predispositions on imitative poetry. Plato writes: “… poetry… not admitting at all any part of it that is imitative.

All such things seem to maim the thought of those who hear them and do not as a remedy have the knowledge of how they really are. ” This seems to suggest that under Plato’s perfect society, imitative poetry should not be allowed because it is tricking people into believing that these imitations are distracting people from the real truth, the truth that lies in the forms.

Plato places the forms at the highest level of his schema of reality and imitations (certain poetry and other artwork) at the bottom.

He places human representations of the forms – such as the “couchmaker’s” fabrication of a couch – somewhere between the forms and imitative art forms. This couch is loosely based on the form of couch and according to Plato is more permissible than imitative art forms. Although the “couchmaker’s” fabrication of a couch is more truthful than a painter’s representation of the same couch, Plato still condemns it for being deceitful: “… so that they look like they are; however, they surely are not the truth.

” Plato feels that because of the rising popularity of imitative art forms within the city, and the skilful representations of craftsmen, people will be misled by the metaphorical mirror that reflects what is real. By deceiving people like this, Plato believes that this imitative poetry will corrupt the souls of people and therefore should be banned from the city. Along with holding far less truth than the forms, imitative artwork also has negative moral and psychological implications, according to Plato.

To accentuate this, Plato divides the soul into three different areas of importance. The base level – in which he calls ‘the appetite’ of the soul and allocates the least amount of importance to – is driven by urges and sins and is easy to deceive and manipulate. The second level, the will, is the power to control one’s own actions, but can also be influenced. The first and most important level is the intellect or reason; this level drives the other two parts of the soul and, when exercised and mastered, can distinguish truth from imitation.

Plato claims that imitative art forms seem to target the base level (appetite) of the soul because it is the easiest to deceive and people give in to a sensationalist imitation rather than the truth. “The imitative poet produces a bad regime in the soul of each private man by making phantoms that are far removed from the truth and by gratifying the soul’s foolish part… ” Mimesis weakens the first and second levels of the soul by appealing to the base level’s pleasure-seeking ways. According to Plato, imitative art forms are representations of the forms; mere renderings of the truth.

Both philosophers disagreed often and it is no surprise that Aristotle’s thoughts on mimesis are an implicit repudiation of Plato’s thoughts on mimesis. In Aristotle’s Poetics he splits mimesis into three varieties: the media, the objects and the mode of mimesis. He does this to help build upon his argument that art and mimesis have importance to a society and actually have striking similarities to philosophy. The media of mimesis is explained as the dissimilarities in “rhythm, speech, and harmony” that authors and poets can use to get their respective messages across.

Aristotle points out that many people – scientists and poets – who write in verse, can be called makers of mimesis and that each “maker” uses a different media of mimesis. “… they think… no doubt, that ‘makers’ is applied to poets not because they make mimesis, but as a general term meaning ‘verse-makers’, since they call ‘poets’ or ‘makers’ even those who publish a medical or scientific theory in verse. ” Here Aristotle is attempting associate mimesis to more than the arts by referring to mimesis not simply as imitation, but as similar to making.

He is placing a high importance on ‘verse-making’ by showing that a particular rhythm and speech pattern is the only difference between artists and scientists in regard to the way they present their respective works. The objects of mimesis, Aristotle claims “are people doing things, and these people must necessarily be either good or bad. ” Aristotle goes on to say that within representations, people can be portrayed as good or bad (‘better’ or ‘worse’) by artists and we will be able to distinguish this property of goodness or badness through use of mediums such as tragedy and comedy.

The mode of mimesis is a way of representing objects in the same media to which Aristotle believes can be done in three ways: “… in narration and sometimes becoming someone else; or speaking in one’s own person without change, or with all the people engaged in the mimesis actually doing things. ” These are simply parts of speech an author might use to get her message across about the object, showing it to be good or bad. Aristotle then begins to examine what he believes are the overall causes of poetry. Aristotle states that mimesis is innate in people, when we are born we mimic things and we learn through this mimicry.

We understand things we wouldn’t otherwise enjoy seeing in person (re: example of the corpse). The picture of the corpse will “not produce its pleasure qua instance of mimesis, but because of its technical finish or colour or for some other such reason. ” This is to say that we can appreciate the picture of the corpse not due to the fact that it is a corpse (we know it is not a real corpse) but because of the artistic style and or talent of the artist. Aristotle then lays out the foundation for a good tragedy – that is to say – a tragedy that emits emotion to the people watching or reading it.

By invoking emotions through tragedy, people can learn something about themselves and their family and perhaps something even deeper. Aristotle claims that a good tragedy will produce catharsis onto the people watching it. Catharsis is a bi-divisional schema according to Aristotle; it can cleanse people of negative emotions through fear and sadness (dispelling your own fear by watching something scary), or educate or clarify something that one may be struggling with (showing us that road rage can lead to general rage). According to Aristotle, mimesis is innate in human nature and provides us with learning methods.

Through tragedies, comedies, poetry and other imitative art forms, we can learn much about ourselves and the world. Learning and education are important to a society and help the development of young minds. Therefore mimesis is good and should be kept in society. * As with much of their respective philosophies, Plato and Aristotle disagree upon the notion of mimesis in their aesthetic approaches. Plato viewed mimesis as harmful to the best parts of the soul, and thought it tricked people into believing more fantastical things and ignoring the truth. 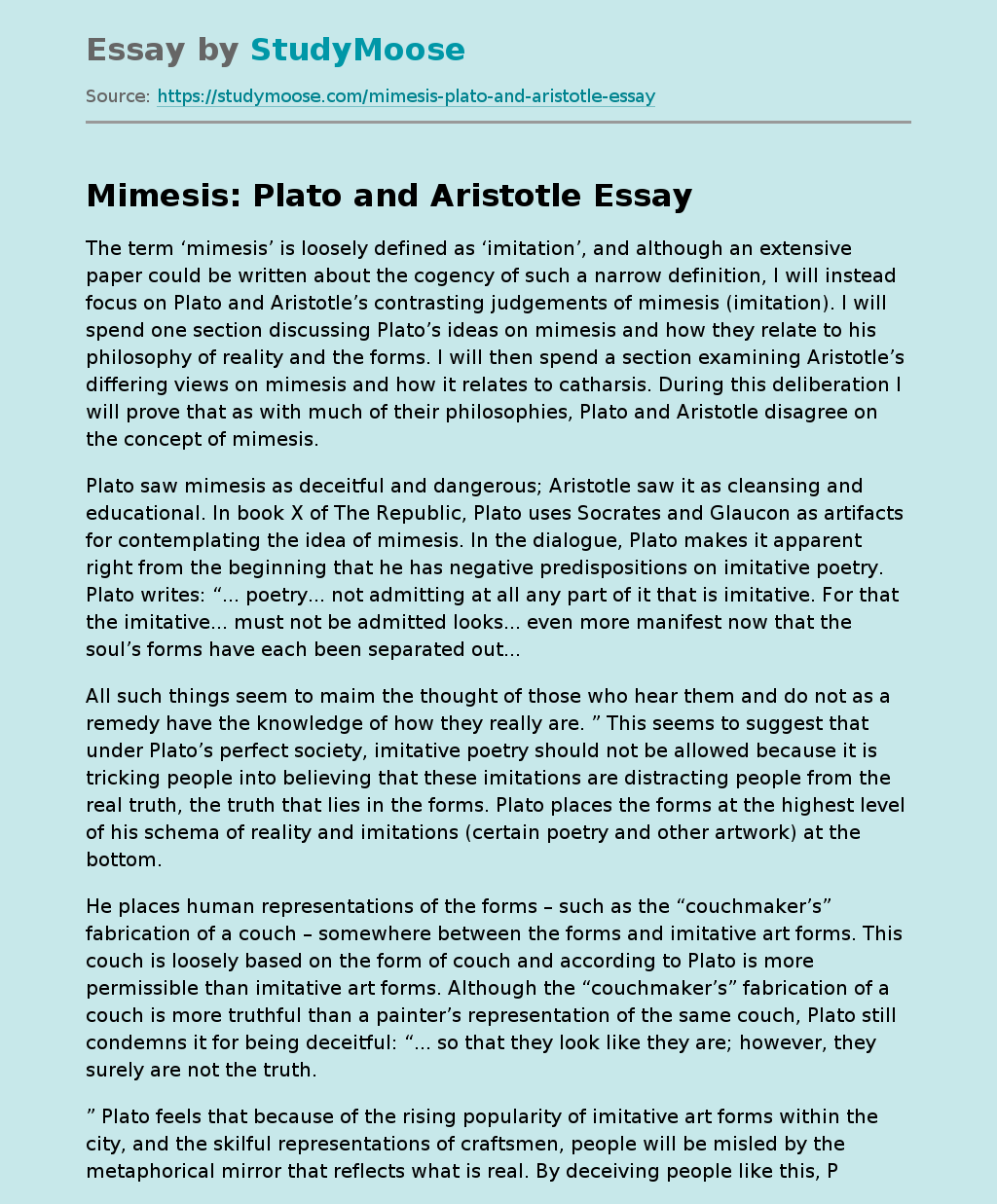