Socrates, Plato, and Aristotle, three men considered to be the quintessential basis of ancient Greek philosophy. Not only were they responsible for Greek enlightenment, but also foreshadowed the coming of Christ in there speculations. Plato, the protege of Socrates, became the first to document the philosophy of his teacher, which in turn is passed down to Aristotle. This process of mentoring aided ancient man in the intellectual evolution of politics and religion, known as the linear concept.

Socrates, the Athenian native ex-hoplite and his successors more often than not focused on three main schools of thought, religion, politics, and the spiritual essence.

Don't use plagiarized sources. Get your custom essay on
“ Socrates, Plato, and Aristotle ”
Get custom paper
NEW! smart matching with writer

Socrates was not a defender of the gods, and by no means an atheist, which he will later, in part, be put to death for. Through Socrates many years of philosophizing religion his most notable accomplishments were; mans existence on two planes and the immortal soul. He believed man existed on two planes, a physical plane, the human form in which people carry out their lives, and the spiritual form, the more concentrated immortal essence that is internal to all.

Perhaps more significant is the spiritual form or soul, Socrates described as the seat of the mind and knowledge is closely related to it, and that only after death would the soul be released. Following the soul release, one could then have the opportunity to see truth more clearly then ever before. Socrates was the first to speculate in relation to the soul, and the first to deem it immortal exclusive of any ritual or practice.

In terms of democracy Socrates’ faith slight, he had his doubts, primarily because he did not condone empowering the uneducated.

He felt that some were not educated enough and were ignorant to political and social complexities, therefore should not have the equality of a greater mind in the matter. He was later tried and convicted for corrupting the youth and atheism, not before passed all his philosophy to his prized student Plato. Plato carried on Socrates’ unique approach to philosophy and extended it one step farther. He expanded largely on Socrates works on immortality of the soul, truth, the existence of man on two planes, and why, only after death, one could see truth more clearly in one of his most acclaimed works, the Doctrine of Pure Form and Ideas.

The doctrine of pure form and ideas illustrated how man was deceived by his senses and that they masked the real truth. In fact, Plato argued that a man would see a horse for example, in a whole new light after death, because only then could he see the “pure form” after the mask of his mortal senses was lifted. Furthermore, he believed that a pure form, in other words an essence that can see all for its genuine truth created the world, which many consider the true beginning of monotheism.

On the other end of the spectrum are his political contributions, whereby he took Socrates’ criticism of democracy to a new level. Plato considered democracy to be the worst form of government; moreover he thought people should be guided by a guardian class or group, much like the oligarchy of Sparta, which he idolized. In addition, Plato contemplated the removal of superior children from their specifically mated parents at birth, after which they would be raised by the state and all its citizens as children of the state as a whole.

Lastly Plato was one of the first minds to encourage the integration of women in government, perhaps building the foundation for female suffrage. Lastly, Aristotle, a man of great virtue and notorious genius, the last piece of the ancient philosophy jigsaw puzzle, appends the studies of his ostentatious predecessors. Being the understudy of Plato, Aristotle found much ado in mans essence and politics. Aristotle took the thought of pure form and pure beings to its pinnacle by concluding that of all pure forms one is unquestionably the purest, and is therefore all good and is god.

On the other hand, Aristotle did not always agree with Plato for example, Aristotle disputed Plato’s theory of human senses. He in turn felt strongly regarding the importance of the senses and argued they should not be denied; furthermore that change is not an illusion but rather an important phenomenon. Change, Aristotle felt, was the process all organisms experience toward a particular end, an end determined by the “unmoved mover” or the supreme cause of existence. Aristotle much like Plato also frowned upon democracy, suggesting it to be mob rule.

However, he was no advocate of oligarchy or monarchy either; in fact he condemned Sparta for empowering women, and felt that government should be run by wealthy men who have been trained by philosophers. Socrates, Plato, and Aristotle are among the greatest philosophers of all time; their ideas have been passed through the ages and have been integrated within many modern day societies. As stated, the three men continually added toward the growth of religion, politics and the human soul in a process which is known ads the linear concept, constant changes and evolution toward the birth of many religions and political ideologies. 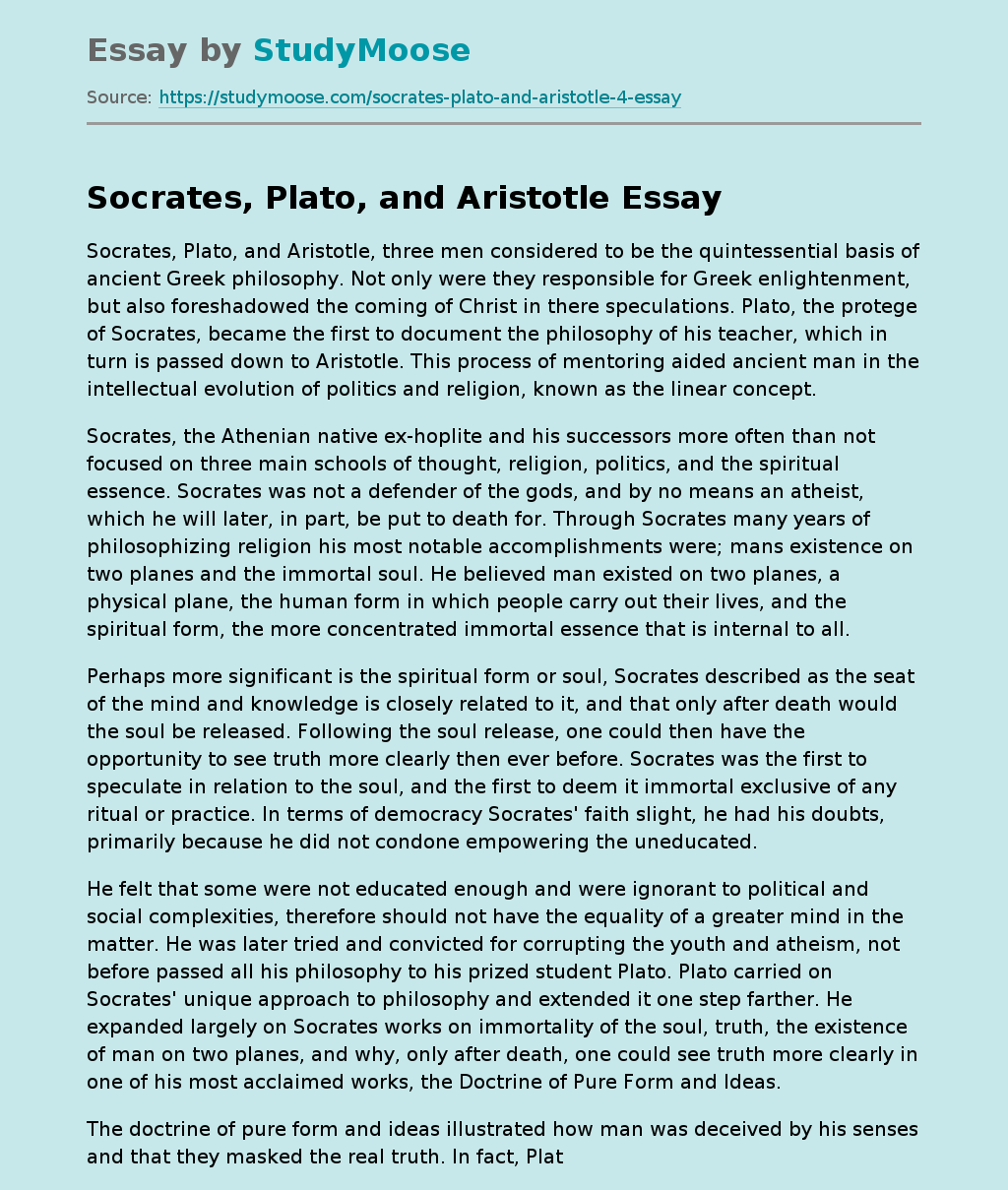