The Ideal State: According to Socrates, Plato and Aristotle

“In general philosophy came into existence when the Greeks discovered dissatisfaction with supernatural and mythical explanations of reality,” (Kreis, 2000). Philosophy, as we know it today, obtained the foundation of its teachings from ancient Greeks who wanted a logical explanation to the order of the universe we live in. These men wanted to explain society’s dilemmas based on realities they can constitute through reason alone and not through some convention based on mythical uncertainties.

Among such men were Socrates, Plato, and Aristotle.

Turn in your highest-quality paper
Get a qualified writer to help you with
“ The Ideal State: According to Socrates, Plato and Aristotle ”
Get high-quality paper
NEW! AI matching with writers

All three great philosophers believed that man was not self-sufficient and that he needed others in order to live. In fact, “Socrates, Plato, and Aristotle all believed that man needs to be part of a State in order to live a truly good life,” (Studyworld, 1996-2006). From this, we can then say that what these three great minds had in common was the idea of an ideal State that can rule over the people. Although Socrates, Plato, and Aristotle all believed in the concept of an ideal State, they had differing ideas on how this ideal State would work.

Socrates, best known for his method of teaching wherein he would engage in endless conversations with young Athenian students, was the first philosopher (among the three) to formulate a general idea of the ideal State. Socrates, during his time, openly objected to democracy as a form of government, (Wikipedia, 2006). Direct democracy, which is simply understood as a system of government wherein men directly govern themselves, was the Athenian ruling during Socrates’ time.

Socrates believed that a direct democracy was not the best system of ruling because he believed that the average man was not capable of ruling himself effectively. For Socrates, the perfect republic can only be led by philosophers because only philosophers have the wisdom or understanding to do so. Socrates was the first philosopher to come up with the idea of the ideal State and the ideal Ruler for it. However, Socrates’ notion of perfect state ruling did not end with him alone but rather, it was passed on to his most prized student—Plato.

Plato, like Socrates, believed that it took more than the average man to rule the state effectively. Plato believed that the existence of a state came into being because man alone is not economically self-sufficient. Thus, he needs to live within a society wherein there exists a market and the concept of divided work among men. Plato’s concept of justice stems from the notion of divided labor in society. He believes that the interests of individuals should not overlap because conflicting wants often leads to chaos.

As a result, Plato suggests that the ideal state should be ruled under the principle of divided labor among its leaders. In Plato’s ideal state, there are two apparent divisions in handling state affairs. The first division entails that only the traders are allowed to dabble in the economic undertakings. It is the role of the trader to take charge of economic affairs and produce goods for the people; this duty, without external interference, is for him alone to accomplish. The second division, on the other hand, entails the role of the state Guardians.

Within this division, there exists the role of the military (led by the Auxiliaries) and the legislative branch (led by the Rulers). The military component of the state are assigned to protect the common wealth of the people while the legislative component, make laws or pass judgments in order to enforce order within the state. In a nutshell, Plato believes that there should be specific roles for specific leaders in the State and further, a strict observance of each one’s task.

Plato, like Socrates, believed in the concept of philosophers as rulers of the State since they possess wisdom and a great understanding of state affairs. Plato calls such people “Philosopher Kings” and describes them as individuals who grasp what is true and enduring. Plato, in The Republic says that, “Until philosopher rule as kings… until political power and philosophy entirely coincide… cities will have no rest from evil… nor I think, will the human race.”

After all, where could one find a person to fit the title of a “philosopher king”? It seemed too “ideal” for Aristotle to find such a ruler and at the same time, rule harmoniously among other men. Due to this, Aristotle made his own framework of a properly functioning state. Like Plato’s ideal state, Aristotle believed that the rulers of the state had to be educated and knowledgeable about state affairs.

However, since he did not agree with Plato that philosopher kings could possibly exist, he suggests that the middle class should rule the state instead. For Aristotle, the middle class would be fit to rule a democratic system of government because unlike the elite class, they are not yet tainted with so much greed and corruption and unlike the poor, they are not uneducated. In Politics, Aristotle’s most famous work, he says that “the middle class is least likely to shrink from rule, or to be over-ambitious for it; both of which are injuries to the state.”

In conclusion, the three philosophers all believed in the possibility of having a system of government that would best address the needs of the people. They desired for a state that was ruled effectively without compromising the rights of the people it served. Although the three philosophers differed in their conclusions of who would best rule the ideal State and how its affairs should be handled, they all strived for the same desire which is obtaining The Good Life for all.

The Ideal State: According to Socrates, Plato and Aristotle. (2017, Apr 03). Retrieved from http://studymoose.com/the-ideal-state-according-to-socrates-plato-and-aristotle-essay 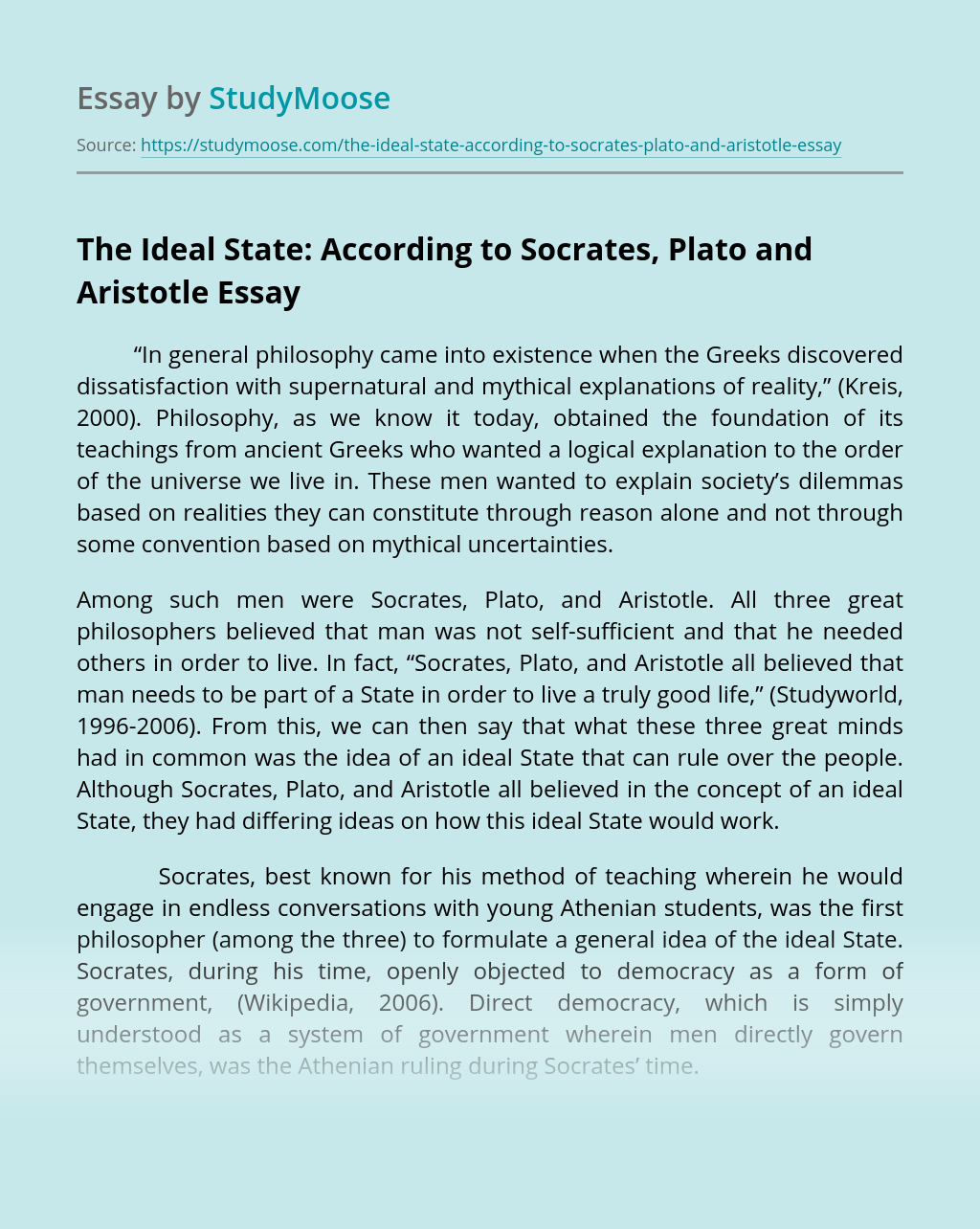 Turn in your highest-quality paper
Get a qualified writer to help you with
“ The Ideal State: According to Socrates, Plato and Aristotle ”
Get high-quality paper
Helping students since 2015
Stay Safe, Stay Original