Platonic communism advocates for abolishment of private families ownership among the upper and the lower class in favor of communism. This is what Plato in the Republic referred to as the ideal city . From the writing of Aristotle in Politics, this idea of Plato has been the center of criticism. Most of the critics have claimed that the idea is a cause of confusion. Aristotle has aired his worries about the nature and extent of communism in the society. Aristotle has also argued in opposition to stipulation of communism in a perfect political society.

Don't use plagiarized sources.
Get Your Custom Essay on Aristotle’s Critique of Plato’s Theory of Limited Communism Just from $13,9/Page

According to Aristotle, in platonic communism there is no clear explanation on the way the lower class is meant to live. This is problematic especially given the fact that this is the class that constitutes the majority in the society. Aristotle like many other critics claims that people cannot be in a position to live devoid of private property and families .

There is no evidence anywhere of people who exist communally. The criticism of Aristotle is right owing to the fact that the Republic does not completely or clearly address the issue of the way the lower class is to survive. It does not address particularly the issue of whether the lower class is to exist communally or not . This is the reason why Aristotle is justified to claim that the question is not completely resolved. Many of the current scholars agree with the fact that the communism in the republic targets the rulers, and that the lower class exists in a way that does not need to be referred to as communistic.

In the Republic, it is clear that a communism of children and women will only occur amongst the rulers . The argument of Aristotle is simple and clear that Plato does not take a clear position in his limited communism ideology . This reveals the fact that Aristotle’s criticism of Plato’s theory of limited communism as put forth in the Republic is justified and thus fair. Bibliography: Plato, The Republic Of Plato: Second Edition, New York: Basic Books 1991. Aristotle, The Politics, London: Penguin Classics, 1981 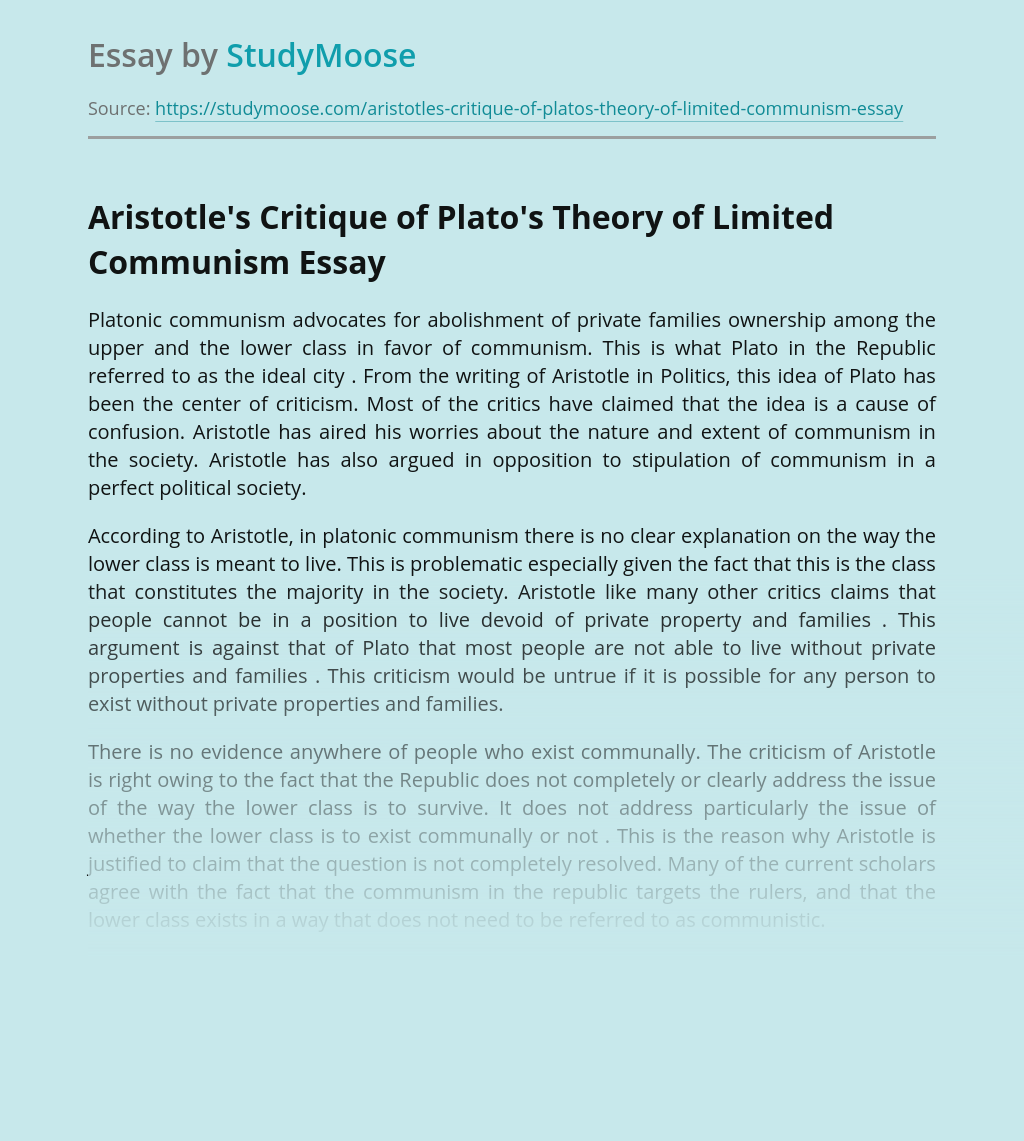 Modernization theory is the process of transforming from a traditional or underdeveloped society to a modern Western societies way of life. Basically, Modernization theory became the foundation stone of this evolutionary prescription for development. The theory is not homogeneous—numerous proponents disagreed on several key features. But in broad outline, the theory focused on deficiencies in...

Death of a Salesman Context

Death of a Salesman is a play that consists of a HISTORICAL background which is key to understanding the play. It was written in 1949, just a few years after the World War ll was over, meaning the United States, where the play occurs, was going through many changes. For example, the war caused an...

Get Essay
Spider Eaters a Historical Document About China

Yang’s story crosses the period over three different decades. She was from an innovative cadre’s household. After investing her early life in Switzerland, she signed up with the Beijing 101 Middle School, which is a high school for elites. After the Cultural Revolution broke out, she actively took part in Red Guard activities in Beijing...

Platonic communism advocates for abolishment of private families ownership among the upper and the lower class in favor of communism. This is what Plato in the Republic referred to as the ideal city . From the writing of Aristotle in Politics, this idea of Plato has been the center of criticism. Most of the critics...

Australia's Response to Communism in the 1950's