Explain and define Plato’s theory of Forms with your personal Criticism. Plato was born in Athens on 428 BC. He was a Greek philosopher who laid foundations of western philosophy. He raised basic questions and problems of western thought, goodness and virtue, truth and knowledge, body and soul, ideal political state, and use of Literature and Arts were some of the pre dominant topics of interest to Plato. Plato devoted himself completely to philosophy. He was a student of Socrates. He was a great admirer of Socrates and he initially joined Socrates school of thought to learn philosophy.

Don't use plagiarized sources. Get your custom essay on
“ Plato’s Theory of Forms ”
Get custom paper
NEW! smart matching with writer

Later after the death of Socrates, he found an academy where geometry was most prominent in the curriculum along with mathematics and philosophy. He was also influenced from pre-Socratic thinkers like Heraclitus and Parmenides; who rejected physical world and said that inner is more important than believed apparent world. He was also influenced by mathematical concepts derived from Pythagoras. He learned dialectical method of following truth in order to derive a philosophy, ideas and opinions.

According to Encyclopedia Britannica literally word Form means, “The external shape, appearance or configuration of an object in contradistinction to the matter of which it is composed. In Aristotelian Metaphysics, the active, determining principle of a thing as distinguished from matter, the potential principle. ” (Encyclopedia Britannica, 2012) In Stanford Encyclopedia it is stated that, Plato’s term ‘eidos’ by which he identified the permanent reality that makes a thing what it is in contrast to the particulars that are finite and subject to change.

The Platonic concept of form was itself derived from the Pythagorean theory that intelligible structures and not material elements, gave objects their distinctive characters. Theory of Forms states about what is real and what is not. The real is thought to be perfect whereas things which are not real are changing. Plato advocates that the world of forms is different from world of appearances. World of Forms can only be understood by philosophers and those who seek the truth. The dialogues in this theory portray knowledge as the process of leaving dark caves for going into sunlight.

People who live in dark caves find their reality in shadows. These shadows are actually the symbol of the apparent world and it is just a shadow of what is real. Plato says that this world is not real; it is only the ‘world of forms’ which is real and never changes. It can be explained by many examples; for example we all try to seek knowledge but in reality what we learn is an opinion only. Likewise one thing is beautiful for someone but it can be ugly for someone else. People who have an urge to know and understand the true knowledge in the world can only touch the ‘intelligible world’.

This world of objects is not independent because it depends on another real world of ‘pure forms or ideas’. Objects in this world have got their qualities from the ideal world. An object is beautiful because it takes that beauty from the ‘higher realm’. This concept of ideal Forms and forms of the world can be explained by geometry. Any square or triangle that we draw or construct is imperfect because it is ‘merely approximate the ideal triangle’. This ideal triangle has no connection with senses or reason because it is not concrete but a concept or an idea in the real world.

Plato says that, the world of forms can be characterized as ‘changeless’ , ‘eternal’ and ‘real’ whereas physical world undergoes many changes and decay. The criticism on Plato’s theory of forms is that, he could not be able to draw a logical connection between ‘the realm of forms’ and ‘physical world’. According to Aristotle, this theory does not explain that how permanence and order can be attained in this world and how we can have objective knowledge of this physical world.

Plato separated two worlds so distinctly that it failed to explain a former two points. The objectivity and permanence of real world does not explain this physical world hence establishes no strong connection between the two worlds. In my opinion Plato puts an argument that intellectual truth is truer than physical truth. This universe is created by God who is pure and the ultimate reality. He has no physical being but he has created a physical universe. This physical world is a copy of the real universe which only exists in the mind of creator.

Similarly all horses are copies of one horse which exists at some higher land of truth. Likewise all beds are only copies of an ideal bed which lies in heaven probably. These examples are given by Plato to prove that world of forms is different from world of reality. It concludes that forms are relative and they are mere imitation of the real. The basic function of theory of forms is unification. It serves to unify ‘groups of objects or concepts’ by connecting them to a pure essence of the real world. 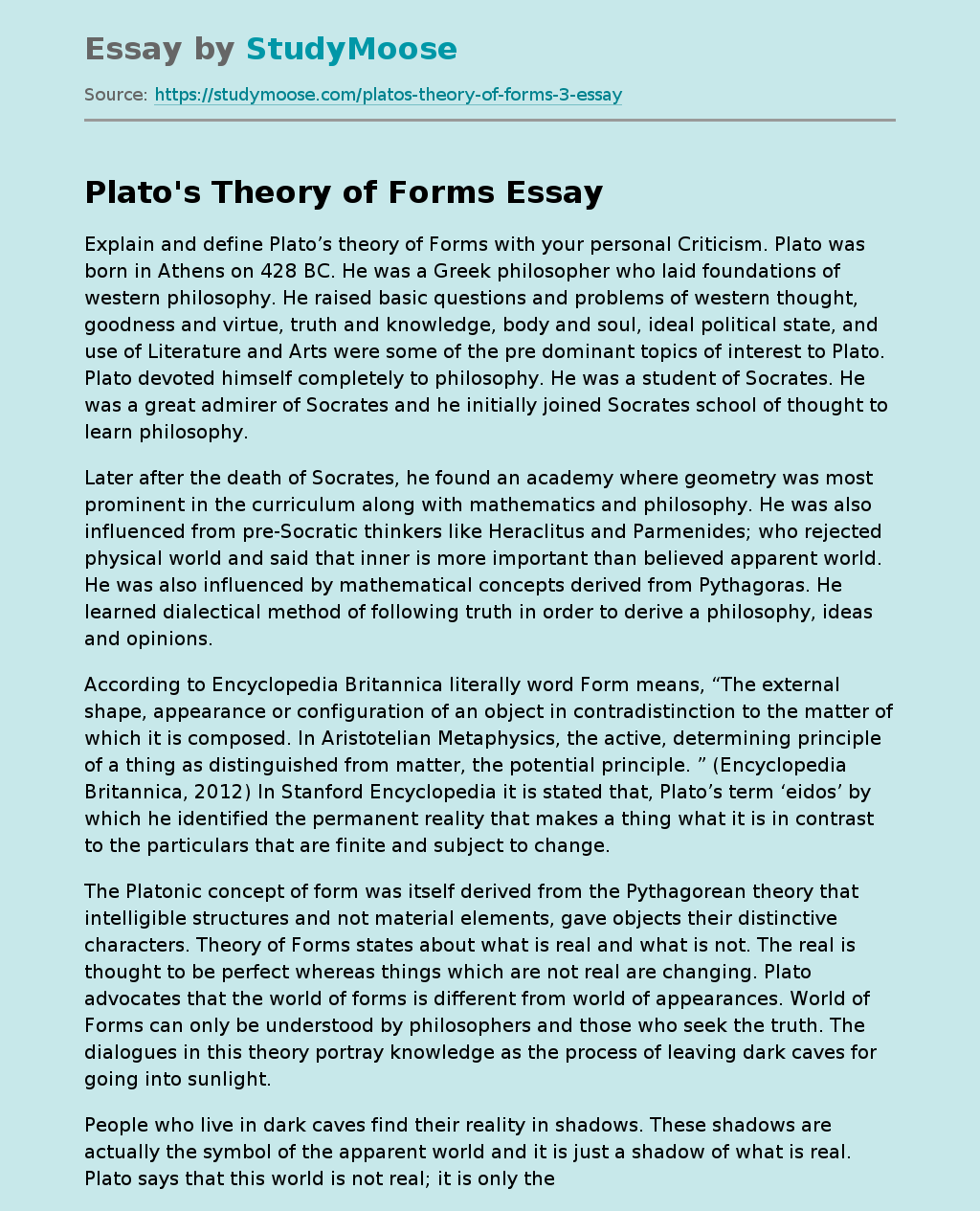