Media the Fashion Trend Setter and its Effects on Youth

How the youth define and shape their culture depends largely on societal influences. Mass or electronic media, considered as the most powerful tool in communication today, primarily set the trend in the culture of fashion. There are many diverse channels for fashion information and influences. Magazines and fashion television are mass disseminators of ideas and looks, but there are some more subtle, yet powerful, influences: for example, clothes worn by popular television actors and the ‘viral’ buzz created by word-of-mouth and word-of-mouse (Internet) chat with friends and colleagues (Jones, 2005, p.

Don't use plagiarized sources. Get your custom essay on
“ Media the Fashion Trend Setter and its Effects on Youth ”
Get custom paper
NEW! smart matching with writer

“Fashion is a subject of vital interest […] especially to the young (p. xi). ” The introduction of music videos and other advertising campaigns and promotions brought forth the so-called ‘fashion fraternity’. A peer group advocating the pop culture can be easily distinguished from those who are not. Like any other businesses, fashion industry also adopts a systematic scheme to effectively capture its market, specifically the youth. Starting from the runway, the trend moves all the way to the different media outlets – newspapers and magazines, television, radio, and the Internet – until it reaches the target audience.

Fashion media are always up for the existing and emerging styles, with forecasts and suggestions for the next season. The constant advances in communication technology allow ideas and images to race around the globe in the blink of an eye (p. i). The youth continues to be amazed and shocked by the new trends they see on the computer and television screens as well as in newspaper’s pages.

This overwhelming reality poses both positive and adverse effects. Almost everything one can Media 2 see in all media outlets carries a merchandise of male and female bodies.

While there are respectable personalities in film and music industries who are role model of decency, many do not have inhibitions to show off everything. This is what most parents are concerned of while their teenagers enjoy the feeling of belongingness. Nisey Williams share the same view in her article “I hate Britney”, “Pop culture seems to be in downward spiral, continually going from bad to worse. It’s bad enough to have to endure countless images of exposed female bodies on every music channel […].

” Why is accommodation to new fashion easy in youth but so difficult in old age (Bornstein, 1984, p. 63)? How do the electronic media effectively influence the fashion choice of the young adults? As part of media promotional, how do music videos intensify the desire of the youth to be like that of the artists? How fast does the trend change? With its high-speed and all-knowing attributes, electronic media is deemed the second god which man has created (Schwartz, 1982, p. 1).

How then can parents possibly disengage their children from the fashion trending of the mass media? Through survey research, this paper seeks to answer these thought-provoking questions. Media 3 Andersen, N. (2007). Music Madness: Questioning Music and Music Videos. Minnesota: Capstone Press. Bornstein, M. H. (1984). Psychology and its Allied Disciplines: Volume 1: Psychology and the Humanities. New Jersey: Lawrence Erlbaum Associates, Inc. Buckingham, D. (2000). After the death of childhood: Growing up in the age of electronic media.

Media the Fashion Trend Setter and its Effects on Youth. (2016, Sep 17). Retrieved from https://studymoose.com/media-the-fashion-trend-setter-and-its-effects-on-youth-essay 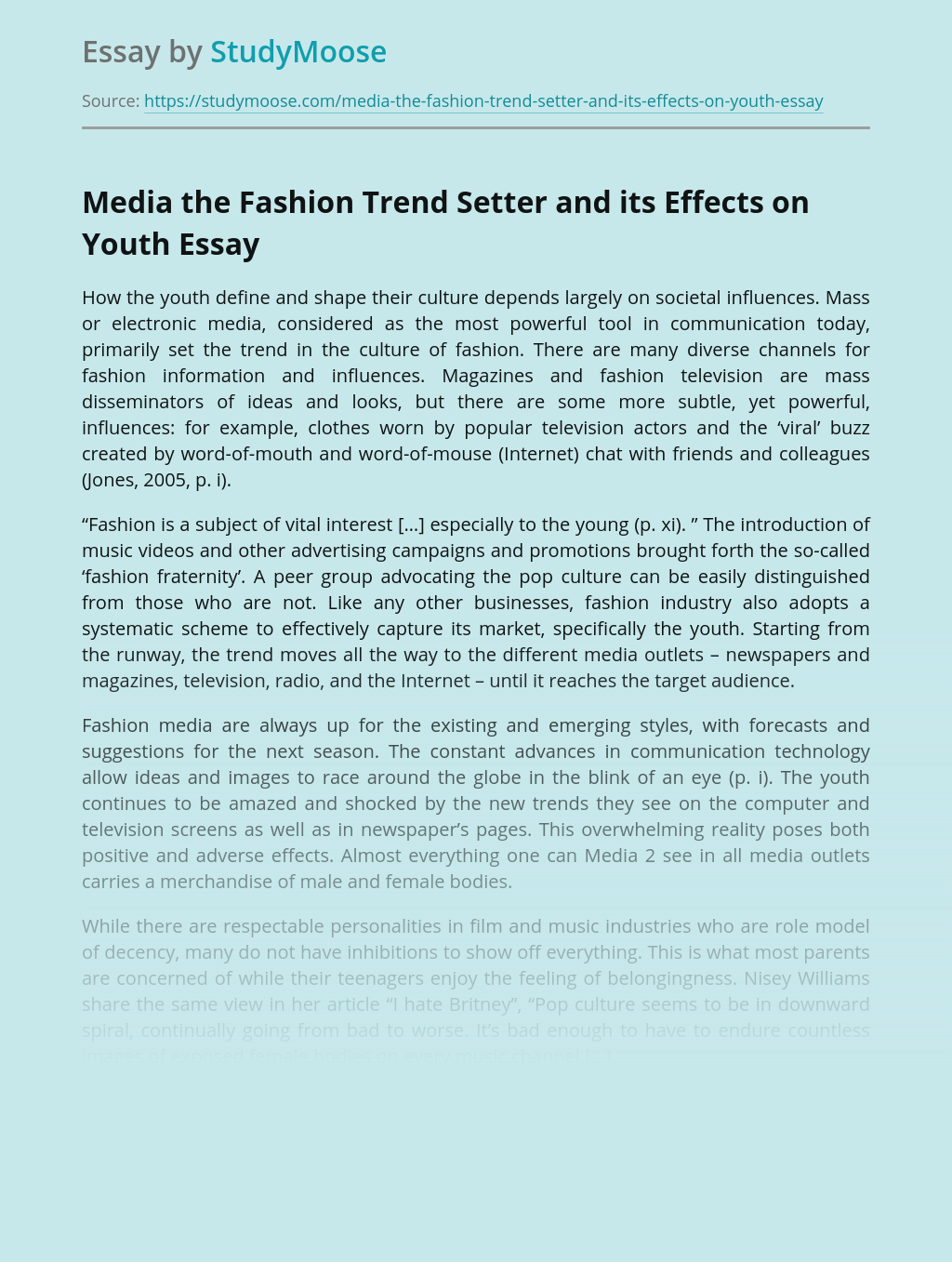