Bollywood and The World: The Secret Behind the Upward Trend of Hindi Movies

Who doesn’t know the term Bollywood these days? It is the world’s biggest film industry. “Larger than Hollywood?” you will ask. Yes, much larger. With about 1600 movies, the Indian entertainment industry in Mumbai creates about four times more movies per year than Hollywood, the Los Angeles–based American movie industry. But that doesn’t mean that it makes more profit. The Indian film Industry in Mumbai generates only about one tenth of the profits Hollywood makes. The movies in India are cheaper made, actors don’t earn as much as in America, and it costs less to spend a movie night in the cinema.

Don't use plagiarized sources. Get your custom essay on
“ Bollywood and The World: The Secret Behind the Upward Trend of Hindi Movies ”
Get custom paper
NEW! smart matching with writer

In 2016, 2.6 billion cinema tickets were sold in India alone. Besides, Indian copyright-laws are lax, so movie piracy is widespread and normal. The interesting fact is that Bollywood isn’t even the only Indian film industry. It is one of three different ones which are different from each other by the language films are made in.

Bollywood movies are made in Hindi, never in Tamil or Telugu. The other two languages have their own centers, which are called Tollywood and Kollywood. They produce an equal amount of movies per year. But Bollywood is by far the most famous of all. And how is that?

First of all, India is the second most-populated country n the world with about 1.3 billion people and a fast growing tendency. This is another world which we Westerners like Europeans and Americans often forget, because it is far away. However, the Indian film industry is increasingly influencing the world’s perception of India.

Bollywood movies are known for their colorful and lively performances which often remind the viewer of musicals. They oven deal about love and show big emotions. The common storyline is that a poor boy loves a rich girl and has to fight her family to get her, or vice versa,

a poor girl and a rich man fall in love and have to fight for their love. This hints at the caste system in India, in which people from different castes are not allowed to marry. Another favored story is that of an honest cop who fights the corrupt system. In the west, where people are used to Hollywood films, many people find Indian movies too unnatural, unrealistic and stereotypical, often senseless. Many movies are like that, but there are some outstanding movies that gained worldwide recognition and deal with important topics such as gender roles or environmental pollution. “Too cheesy and fake”, commented Emel a student in ASLP when asked about whether or not she liked Bollywood movies. Angelina Arnes a student in ASLP said that she watches an Indian movie from time to time with her friends, but not by herself. “These movies are made to have fun, so I am having some fun time when I watch them. It doesn’t happen very often though.”

So why is it that the popularity of Bollywood is constantly increasing on a global scale? Many movie lovers wouldn’t watch a Bollywood movie in the cinema, but usually they see them on TV. Satellite TV is mainly responsible for spreading movies around the world. It is part of globalization in the entertainment industry. People even in the poorest and remotest areas in the world have a TV these days, and Bollywood is found on many channels, often dubbed in many languages. Another reason for the spread of Indian films is their distinct genres. They classical movies are a mix of heartbreaking love stories and incredible dance shows at the same time. This mix is it that won the hearts of billions of people everywhere. “I just love the colorful dance performances in the Indian movies,” said BLUBLUBLU, “they are lifting my mood and make me want to dance with them. It is incredible what perfect dance moves such large groups of dancers can do simultaneously. I just love them.”

There now are large and growing Bollywood fan groups in countries like Egypt, Afghanistan, Pakistan, and even in countries like Poland and Chile. Bollywood movie stars such as Shah Rukh Khan are recognized and appreciated everywhere for their outstanding performances. The world has become a global village, and Bollywood is on its way to becoming an even greater factor and influence on a large scale. In the Arab world, people can choose from a variety of channels that air Bollywood films and soap operas, and they watch them both dubbed or with subtitles. It’s a thing there now, and kids know all the movies, and famous actors, songs, and dance moves. Also, the diaspora-Indians who emigrated to places around the world are partly responsible for spreading their culture and influence in their new home countries.

Bollywood and The World: The Secret Behind the Upward Trend of Hindi Movies. (2021, Mar 29). Retrieved from https://studymoose.com/bollywood-and-the-world-the-secret-behind-the-upward-trend-of-hindi-movies-essay 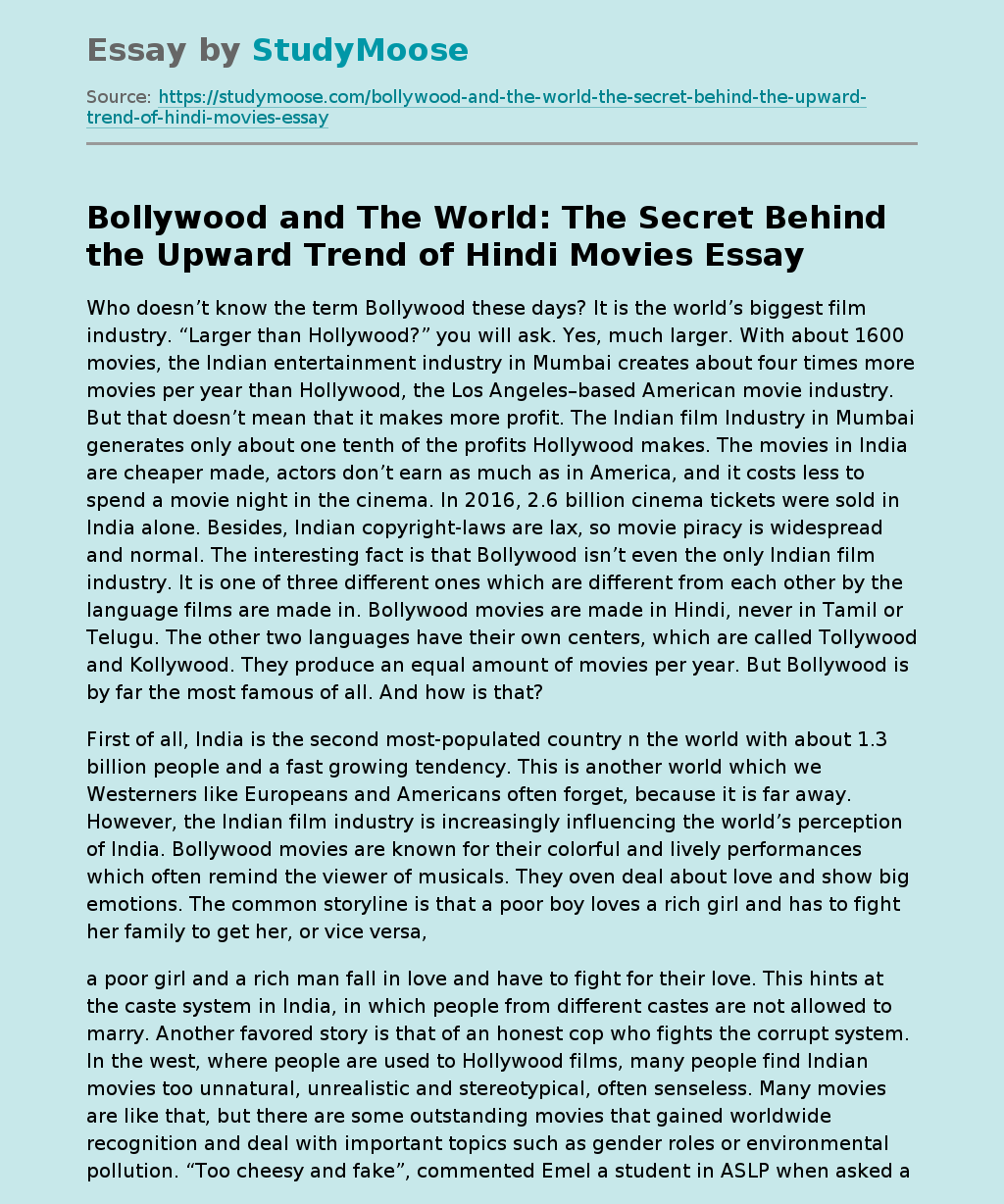