When I hear “India,” the first thing that comes to my mind is a land where movies are worshipped. India is home to the Hindi Film Industry, which is popularly known as Bollywood. Bollywood movies address Hindi identities and their social and political concerns. “Hindi cinema has a great deal of influence to interpellate its audience to the hegemonic values at large in India” (Dhillon and Gwyne 55). Films are powerful mediums to circulate and reinforce ideals and interpretations to the audience.

In this paper, I will talk about the meanings that are negotiated, the portrayal of Indian identity, the identities accepted or rejected by Hindus, the horrific trope of family life and living space that are illustrated in the Bollywood film industry.

This paper will also contribute to the increase in science fiction films, the representation of sports films, the popularity of Hindi songs, the collaboration between Irish and Hindi films and, finally, the same language subtitling in the Bollywood film industry. With its large population, India is also the land where many languages are spoken and people confess all the major religions of the world. With this fact in mind, one might then think that all those faiths and cultures must be peacefully united. While the country attempts to show that image of unity and closeness, the truth is that different ethnic groups are not united by the idea of “Indian-ness.” Narinderjit Kaur Dhillon and Joel Gwyne, talk about how nationalist films in india “ …. Since the 1980s a homogenous Indian culture and tradition has been constructed by the Hindu Right, Conflating Conceptions of Hindu identity and Indian Identity and thereby marginalizing other racial and religious communities.

This is shown in the article through the idea of projecting Muslim (males) as Foreign Invaders. Furthermore, Dhillon and Gwyne go into detail on how nationalist films like “Revolt: A Love Story,” show themes of “exotic Muslim and simple Hindu” and “Demonized Muslim and Hindu hero.” These themes are shown through the two main characters in the movie, Tara Singh, a Hindu, and Ashraf Ali, a Muslim. Tara Singh is introduced as a simple dressed character who is not interested “in worldly pursuits and, instead, locates happiness in music and singing,” which complies with the Hindutva values and spiritual affairs. On the other hand, Ashraf Ali, is shown as a character whose interest lies in “political domination, the accumulation of wealth and indulgent lifestyle.” The movie highlights how the Muslim community does not follow the ideals and values of Hindus, which prioritizes spirituality over economy, thus making the Muslim man not an ideal Indian citizen. In nationalist films such as Revolt, the Muslim community has often been marginalized and shown as a threat and an enemy to Hindustan. In addition to this, Hindi films also portray the many ways Bollywood horror films are represented in the daily lives. To explore the different meanings and cultural stigmas of horror films and Hindi cinema, “a series of semi-structured interviews conducted intermittently between 2004 and 2009 in two global cities: London and Bombay” (Banaji 457).

The interviewees were fairly diverse, ranging from “UK students and teachers, domestic maids, transport workers, middle-class housewives, and students in India” (Bana 458). The interviewees analyze the horror film, Bhoot, where a Mumbai businessman and his wife are looking for a new flat. The apartment has been vacant since its previous resident jumped off the stairs and died. Undeterred, the couple still decides to move in, but before long, the wife starts to have visions of a ghost who died in that house. In the movie, the wife is scientifically diagnosed with “‘multiple personality disorder,’” and religiously diagnosed with “‘possession- by-spirit,’” which suggests talking to the spirit (Banaji 459). Viewers with little knowledge of Indian society were using aspects of the movie and other Hindi movies they have seen as evidence to the sociological truth in Indian society, like, gender biases. In contrast, viewers born and raised in Bombay were dubious of the movies’ state of realism, which they recognized from their daily lives. While the storyline of the movie tells the typical story of a woman and child molested and murdered by men, the subplot tells a different story of a confused and powerless man.

This is different from the typical movies in India that always make male characters in films appear more heroic, because it shows the vulnerability of men. Most of the interviewees pointed out the problem with “male vulnerability” in Bhoot. Dino, one of the viewers from London noted, “Ajay/Vishal—yeah, he’s like [pause] this affectionate bloke, not macho but still a man—like he earns; he smokes; he cares for Swati…” (Banaji 462). This actively illustrates that Hindi horror films not only show the horror side of the daily lives of Indian families, but also try to change the side that became too typical and other movie producers don’t really interfere with. Moreover to the numerous ways Hindi films are used to show themes of Indian society, Hindi science fiction films and the representation of sports in Bollywood movies has been increasing. According to Banerjee, it is interesting how the world’s largest film producing country has not shown any science fiction films until the production of this genre started increasing in the last 10 years.

Banerjee talks more about how this reflects Indian society’s changing concepts of science and technology. “More than 80% of the sf films in India are heavily indebted to one or more big-budget Hollywood production [sic.]” (Banerjee 15). This also means that such Western influence can cross the cultural boundaries, and that they would have to go through alterations that would make the “resulting films into pop-culture of Western conventions and ideas” (Banerjee 15). Since this affects the large diverse population in India with its at least four major film industries that are different parts of the country with different cultural ethics, the demands are no less. Likewise, filmmakers have also made it possible to have sports in their films. Amy J. Ransom analyzes two sports films, “Chak De! India,” about the national women’s hockey team and “Dil Bole Hadippa!,” the story of a woman who plays top level cricket with a men’s team, that feature females instead of the usual male characters in her article. These films both engage in the contemporary gender roles and national identity in India. Both films advance to femininity as both “ Modern and Indian.”

Ransom also indicates how the “foregrounding” of sports is used as a strength of freedom and empowerment for womanhood. Indian sports film differs from the Western sports film because it “locates women as not simply incidental or ornamental characters. Instead, it is the women who elucidate, in a way that men . . . do not,…” (Ransom 48). Bollywood sports films combine the standard western sports films with the specific issues in India. Both films give women an important role to win at something that was culturally a men’s game. Pursuing this further, music has also been an essential part of Hindi films. In the middle of the movie, characters frequently break into a song and sometimes a dance routine. The success of Indian movies usually depends on if the viewers liked the songs in the movie, and not the other way around. To a large degree, songs in the movies have been used for marketing and promotion. “People used to go back to the movie theatre, just to watch the songs on the screen, when those could have been heard on the radio, or on tapes and records” (Bakshi and Sarkar 142). Not only in movies, these songs have been also used for marriage celebrations, cultural gatherings, and also stage shows. As Bakshi and Sankar point out, the songs usually synchronized with the mood of the scenes in the movie, which varied from romantic to sadness.

Filmmakers also collaborate with Ireland to promote tourism in both countries and also invest in them, through film. Rampazzo explains how “Ek Tha Tiger” was the first big budget Hindi film to be produced in other countries. The film was shot in countries like, Turkey, India, Cuba, Thailand, and also Irish urban locations. The author states how the “critical components” of the movie were shot in Dublin. Universities like “Trinity College Dublin” which is Ireland’s oldest and most prestigious university is featured in the movie to attract future Indian students (Rampazzo 168). According to Rampazzo, it’s not unusual for Bollywood Films to be shot outside India, because they have been doing it since 1960s. The article also goes deep into how when the Irish Government was interested in the beneficial relationship with India, because of its rapid economic growth. “….the Irish Government was eager to to capitalise on the high profile of the film to promote Ireland as a tourist destination and as a location for more Bollywood films” (Rampazzo 171).

Another benefit is that when Indian culture is shown in non-Indian movies, it makes them appealing to the viewers who are not familiar with Indian culture. The author also acknowledges how the films that are featured in Western locations like, London, Switzerland, New York, and Sydney portray desirable holiday locations for Indian viewers. In addition to the countless ways India’s film industry benefits Indian society, it also provides Same Language Subtitling (SLS) for the 389 million people in India who can’t read. “….regular exposure to SLS on Bollywood film songs invites automatic and inescapable reading engagement among functionally illiterate children and adults 15+” (Kothari 44). Due to the “low quality of primary education” in India, the SLS is very helpful to the viewers because it increases the number of functional readers in the country.

Kothari also mentions how SLS brought down the 45% of people who failed to decode a single letter after at least five years of school to 13%. Reading along with film song lyrics doesn’t only make the viewer understand the songs but also leads them to read newspapers which can substantially lead them to learn to write. Kothari also goes deep into explaining how adding subtitles in films is not that expensive when you have millions of viewers. He says, “US$1 [sic.] can provide 30 minutes of weekly reading practice to 1000-5000 viewers annually” ( Kothari 44). This shows how SLS can be best seen as an addition and enhancement of schooling. SLS helps the billions of illiterate viewers in India and also viewers from other countries who can’t read. 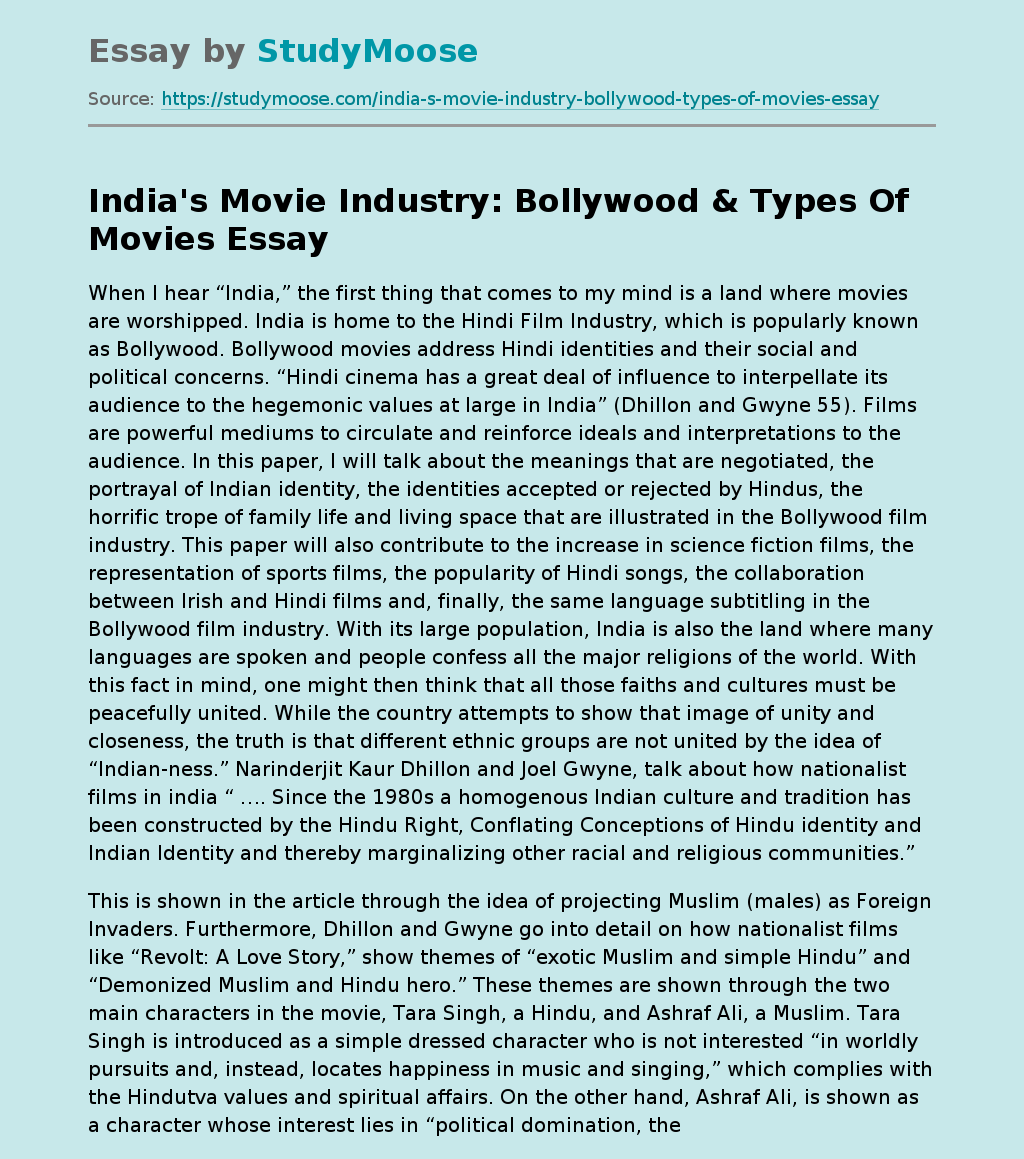