Don't use plagiarized sources. Get your custom essay on
“ Classic horror movies have many unique effects that modern movie does not ”
Get custom paper
NEW! smart matching with writer

Suspenseful music was used as an element to set up the scene screen. Suspenseful music in a film like a comedy, romantic movie, or a horror movie plays an important role in setting up the scene that is on the screen. The music in the film guides the audience into what is playing on the screen. The kind of music used helps get the viewer into the scene that is being view on screen. Most classic horror movies were full of suspenseful scenes that contained haunting melodies.

The music is a critical element that makes the spectators fearful about the what is on screen. Audience members are left waiting on the edge of their seats waiting for that horrific nail-biting scene that’s going to make them jump out of their seats because of the creepy music setting the mood. Many of today’s horror movies lack the suspenseful music needed during gripping scenes; however, to cause the jump-scare that we all go to horror movies to receive.

Modern horror movie trends deal more with scenes that use the natural sounds in the scene as the actor walks into a silent, eerie situation. Silence in a scene on film may help the audience anticipate the scare, but it does not give a better scare.One major change in way movies are made in the last several years in horror movies is the change from using costumes to impressive Computer Graphic Imagining (CGI). Today’s horror movies rely on gruesome monsters that are animated to scare the audience. CGI serves as a benefit in making movies, seeing how directors can do more with CGI than they could with actors. Directors today use fewer people wearing costumes than using CGI. However, the monsters created by CGI do not look real enough where they can be taken seriously by the viewers. Monsters in classic horror movies would be actors in costume, make-up, or animatronics. Classic movie monsters were more horrific looking because they had a more physical aspect in their appearance. The more physical monsters are what made Universal Studios’ monster films legendary. Actor Boris Karloff’s portrayal of Universal Studios’ Frankenstein (1931) is a classic example of a monster coming to life on screen. Karloff’s portrayal gained him many fans–many of them children. “Over the years thousands of children wrote, expressing compassion for the great, weird creature who was so abused by its sadistic keeper that it could only respond to the violence with violence. Those children saw beyond the make-up and understood,” stated Karloff in his interview with We Belong Dead Magazine. The monster in Frankenstein was played by a real person that brought subtle cues to bring about the compassion people felt for him. Today’s movies have so much CGI the mood cannot be taken as seriously whenever people and the objects on screen are involved in a scary scene than that of the classic horror movie and its monsters.The use of blood and gore at various points in horror movies have been used to terrify viewers. This use of blood serves as an excellent element to make the film heart-pounding. Some classic and modern films have included a horrific scene with bloodshed. These scenes are severe cases but complement those movies but having a substantial effect on the audience. The classic horror movie rarely used excessive blood and gore for their scenes. Classic horror focused on subject matter that would haunt the audience watching with fear long after the film was done. Author Kelly Vlahos stated in her article Hollywood Horror: Psychological Classics vs. Modern Slashers that, “Gone is the desire to scare an audience with the mere suggestion of the macabre, to build hackle-raising tension and the feeling of dread, to unlock doors toward a shocking denouement, rather than race from one bloody murder to the next with no more clarity or realization at the end than at the beginning. Today, the visual shock of visceral pain ” crushed bones, ripped hair and torn limbs sewn together in a Human Centipede’ sort of nightmare ” appears to prevail. Digital technology has taken fear to the next level, but why does it seem so unedifying?” Classic horror films used traditional methods to scare their audiences instead of the vulgarity that modern films lean towards. The suspenseful and heart-pounding mood is what classic horror is what classic horror has become known for. Modern horror has a more “in-your-face” action style. Modern horror still incorporats some common elements of the horror genre needed to classify it as a horror movie. A decent horror movie needs understated action along with storied that draw the viewer in to be shocked by what they see. Classic horror films give the viewer the ability to connect with its monsters and what is going on the screen. Modern horror does not give the viewer the chance to get into the subtle context of the story with all of the fast passed action and blood and gore present. Classic horror movies are superior to modern horror movies because they are scarier in that the changes brought by recent uses of CGI and the overuse of blood have made them less scary. Classic horror movies will give you that first-class scare you are looking for over a modern-day horror movie, so if you are going to watch a horror film classic horror is the way to go.

Classic horror movies have many unique effects that modern movie does not. (2019, Aug 20). Retrieved from https://studymoose.com/classic-horror-movies-have-many-unique-effects-that-modern-movie-does-not-essay 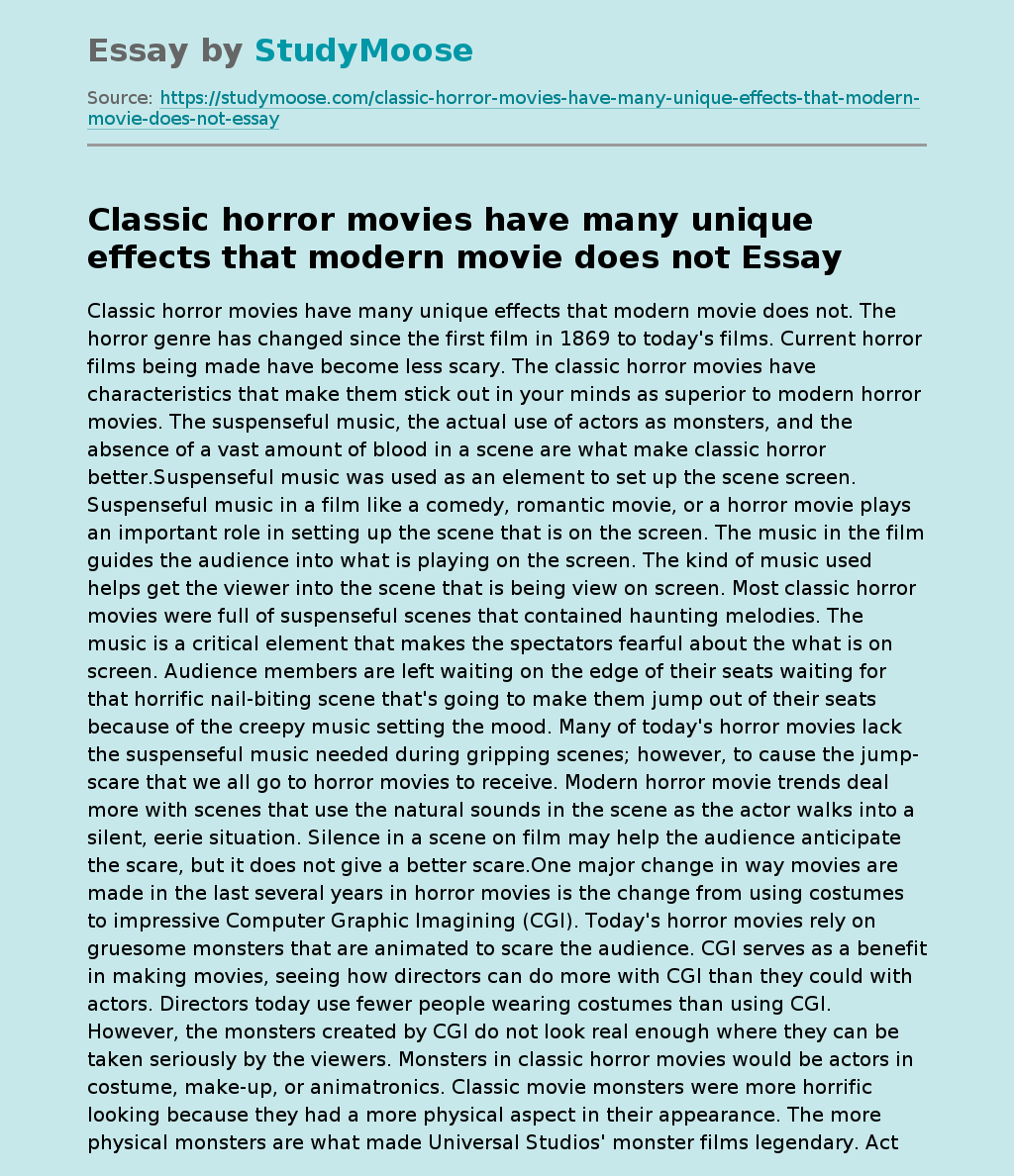