The culture on the Pohnpei island is certainly unique in many ways, and is one of the things that make Pohnpei and Micronesia recognizable. Hearing about experiences of someone who has lived there for such a long period of time, even though raised in a different environment was very interesting, not only when it comes to learning about a new culture, but also seeing how it has developed over a long period of time, as well as how it affected the people of the island themselves.

Don't use plagiarized sources. Get your custom essay on
“ The culture on the Pohnpei island is certainly unique in many ways ”
Get custom paper
NEW! smart matching with writer

The Pohnpei climate is tropical with lots of rainfall, hence it is often known as “tropical paradise”. When it comes to their beliefs, one of the major beliefs on the Pohnpei island is sorcery. Also, they strongly believe that showing greed or jealousy is equivalent to sending a curse. Pohnpeians say that greed leads to many misfortunes, which demonstrates that unity plays a big part in the Pohnpei culture. The togetherness and the respect needed for the feast makes it effective in fighting the curse, so being humble and knowing how to properly cooperate are key values of life for the Pohnpeians.

There were several occasions where it was evident how important the connection of the tribe is to their people, with Sohn Alpet’s funeral being one. The way the whole ceremony was taken care of with people helping each other while preparing his body. Also they brought food, and used the earth oven and drank kava together. Something that cannot be avoided during these celebrations, is drinking kava, which is a huge part of their culture and tradition.

According to them, it brings peace to the whole community. All in all, it was obvious that the Pohnpeians had really close relationships with each other, whether we are talking about families or communities in general. Regardless of whether it was an event that brings happiness or sadness, the Pohnpeians always stand together and are always there to celebrate Also, hidden feelings are a sign of bad luck, according to their people.

Throughout the thirty years after Martha left the island, the culture was affected hugely. It became a part of a government and a nation, recognized by America. Relationships also changed, while Martha was away. One example of this is quoted “I heard that dating customs were changing. Young couples hold hands and eat together in public”. In the past, couples would act differently in public, to the point where they not only avoid showing any affection between them but they pretend like they do not even know each other.

As people visiting other communities became more common, people saw from other cultures that this kind of behavior is normal, and so gradually, they started adapting it. The culture of children changed just as much as the adults. Also, it became rare or almost impossible to see children wearing no clothes, a complete opposite of thirty years earlier. Some of the more advanced changes included new playgrounds, a school, college and a wall mart.

Even though the Pohnpeians definitely became more westernized, certain traditions still remained present. The themes and the respect for high people as well as tradition is something that is still very much a part of the culture. Also, the earlier described togetherness, redistribution ,conspicuous consumption and also striving for prestige remained essential. Even though buildings and roads were built, no signs were made or any traffic regulators. There were still no systems for controlling bad smells or flies. But, as always, kava remained vital in their tradition such as in spiritual practices and celebrations. It still tasted the same way and buying a cup or a whole bottle was now a possibility at the kava bars, as it became one of their leading exports. Along with this they have turned kava in to a cash crop. For a change, the pounding of the drink is now monitored and checked based on health standards.

Despite being blessed with such natural beauty, the island of Pohnpei still did not realize its tourism potential. There weren’t many attractions such as organized entertainment or places to shop. Even though such possibilities were something that is yet to come, feast with giants yams, kava and cultural dances were still there to enjoy for those more familiar with the heart of the Pohnpei tradition. Adoption, as well as ranks throughout the community could still be seen at the island. Also, the motivation behind building the stores was a social benefit, rather than a social benefit. According to them, Pohnpeians are able to become better people by using the stores.

Overall, Pohnpei is certainly one fascinating community that a lot can be learned from. Despite the project not finished the way it was planned, which would have brought more findings about the health changes of the islanders, a lot was gained from their unique community. Their culture, based on the togetherness and great human values such as being humble and being there for each other at all times is the kind of culture that many would love to be a part of. Even though it was almost inevitable to see the Island edge closer and closer over time to what we see as modernized, it is not surprising that some of their key parts of their culture were kept alive.

The culture on the Pohnpei island is certainly unique in many ways. (2019, Dec 12). Retrieved from http://studymoose.com/the-culture-on-the-pohnpei-island-is-certainly-unique-in-many-ways-example-essay 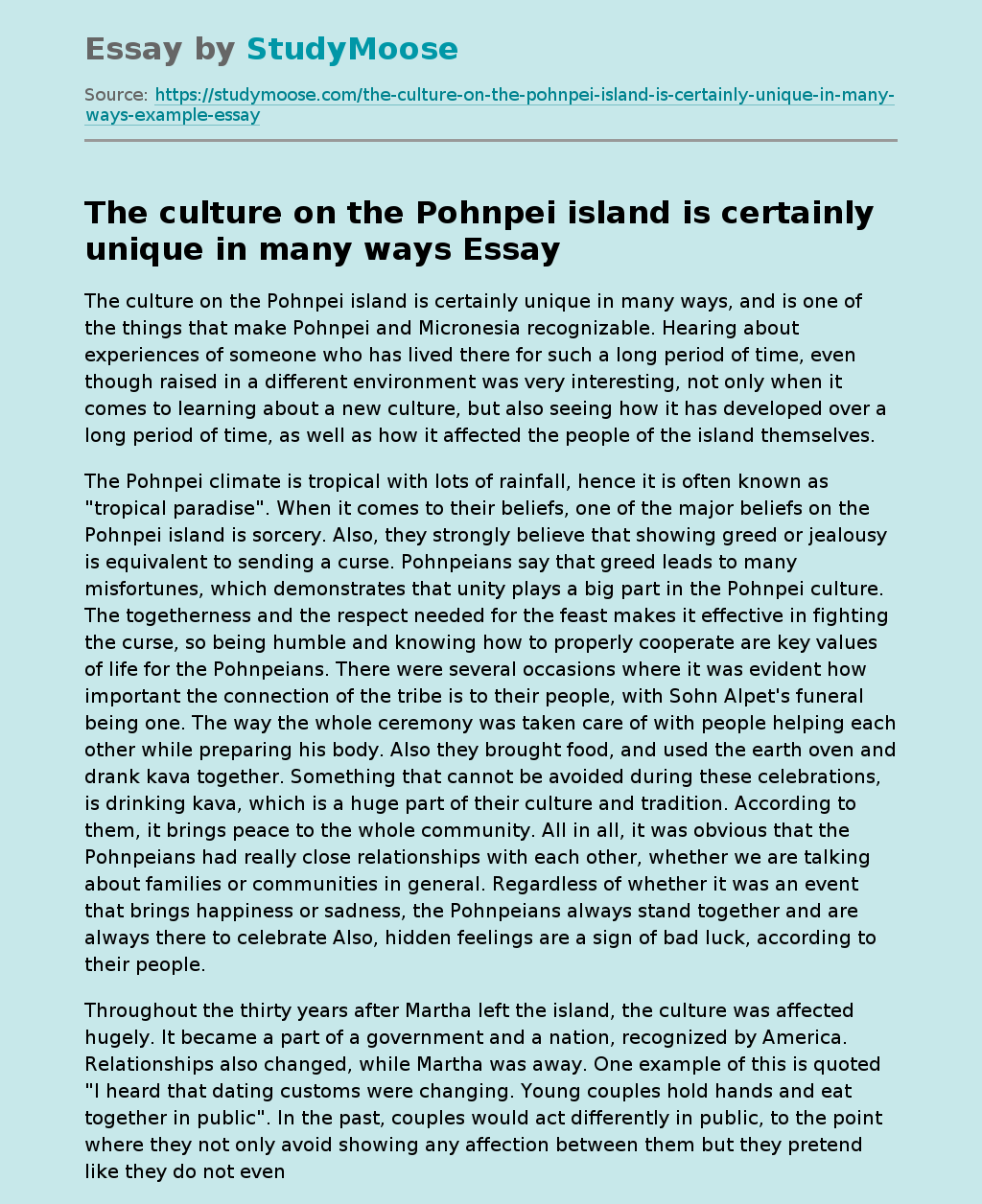