Effects of Social Media on the Youth

Various forms of media, such as the television, radio, newspapers, movies, magazines and most notably, the internet, have impacted heavily on the youth. The media not only serves as a source of information but also provides a source of entertainment. Media sources have relentlessly worked on creating appealing images that entice the youth to their content. Although these may be informative, the youths have been coerced into consuming more time reading or browsing for such information. Recent advancements in computers and mobile phones have led to ease of access of the internet via advanced wireless devices.

Don't use plagiarized sources.
Get Your Custom Essay on Effects of Social Media on the Youth Just from $13,9/Page

Whereas this creates a tech-savvy generation, the content provided by some media houses may be uncensored and entails violent acts, obscene scenes and vulgar language. In addition, adolescents have been enticed into spending longer hours with strangers rather than family. This undesirable environment, coupled with the fact that today’s parents are heavily burdened with income generating activities hence find little or no time to talk to their children, has led to high incidences of youth violence and untoward behavior.

However, the media content has not been entirely negative. This essay analyzes the impact of various forms of the media on the youth and presents various arguments for and against letting young adolescents spend their time scanning media content.

How has the media changed the lives of adolescents? First, today’s youths spend less time with their families and spend more time with strangers. Tamar Lewin, in “If Your Kids Are Awake, They’re probably Online” notes that children between the ‘ages 8 and 18 spend more than seven and a half hours a day’ using electronic devices (Lewin 1). Five to six years ago, youths spent on average one hour less. In addition, the emergence of advanced electronic media devices has curtailed time spent doing group activities which has been channeled to solitary activities (“Awake”). Brent Staples in “What Adolescents Miss When We Let Them Grow Up in Cyberspace” notes that whereas the traditional media content was largely aired through such mediums as the television, which is watched by a family at the same time, currently, the internet has taken over. Secondly, the youth chat, send e-mails and post their daily encounters and problems on the web.

Instead of relating such experiences to their parents, they accept and follow the advice presented by total strangers. This has left teens with ‘nonexistent social skills’ for they are more flexible and aware of the virtual space where they can assume a different personality under a pseudonym, which would otherwise not be possible in the real world (Staples 2). Thirdly, the media has presented various options that aid in circumnavigating life’s hurdles and challenges. As Staple notes, during his childhood, he was presented with situations whereby he had to prove his worth to other people other than his own family members (“Cyberspace”). Adolescents, in today’s world, can easily skip this and opt to send messages or video chat via electronic devices such as mobile phones or the computer.

However, this comes at a cost: They develop ‘low-quality relationships in virtual reality’ at the expense of ‘higher-quality relationships in the real world’ (Staples 2). Therefore, these relationships may appear perfect when the teenagers are on a virtual space but are in reality not practical. Finally, the media has given teenagers a platform via which they can gain an identity and prove their worth. Teenagers, and their advice or point of view, are normally disregarded even when their arguments are valid.

The internet avails an equal opportunity platform through which they can air their grievances or opinions either under a pseudonym or an incognito handle without being disregarded. However, they have been known to violate the law. For instance, Michael Lewis is a teenager who offered his expertise to the Internet Information Service by posing as a 25-year old (“Cyberspace”). However, it is noteworthy that not all teenagers use such pseudonyms with an intention of breaking the law. They may be in fact trying to escape from the ‘boring’ and conventional set-up where information is mainly presented in books (Staples 2). How much contact with the physical world do the youth need?

Lewin outlines a study by the Kaiser Family Foundation in which it was found out that today’s teenagers spend around seven and a half hours using electronic gadgets (“Awake”). This did not include the time spent texting or talking on their cell phones. Obviously, this time spent in contact with the virtual world is too much. There is a need to spend more time with family members and others in the physical world. Whereas Dr. Rich feels that parents and other key players in teenagers’ lives should accept the usage of media devices as part of the youth’s environment, there is a need to limit the hours spent on the internet and other media sources (“Awake”).

On the other hand, parents should not entirely limit their children from accessing media content via electronic gadgets. Teens may end up feeling left out or develop an anti-social behavior in retaliation. Lewin outlines Ms. Calinan’s decision to limit her child’s access to video games to one and a half hours on weekends. Whereas this may force Trey, her son, to work harder in his studies, it may limit his development on the usage of electronic devices in this tech-savvy era (“Awake”). Therefore, the question as to how much time the youth should spend with the physical world has no straightforward answer. It should vary from child to child. Different teens have different reasons and needs.

Whereas most heavy internet users have been linked to ‘behavior problems and lower grades,’ not all teens have been affected in a similar fashion (Lewin 1). For instance, Lewin found out that Francisco Sepulveda used his cell phone as an alarm clock in addition to accessing media content. However, his mother felt that he did not use his phone for its rightful purpose: To work on his assignments (“Awake”).Hence, parents should regulate their teen’s access to media content according to their teenagers’ situations rather than ascribe to a particular schedule. Do social media benefits outweigh the costs?

Although both Lewin (2010) and Staples (2004) have presented their arguments by bordering on the negative influences of social media, there are numerous merits that cannot be overlooked. Teenagers can easily access a host of information sources that they would otherwise not be interested in were they to be limited to the traditional sources of information. For instance, unlike their parents and other preceding generations, few teens devote their time to watching news. However, the internet, through social sites such as Twitter and Facebook and search engines, such as Google and Yahoo, provides a direct link to the world’s current news. Hence, it can be argued that today’s teens receive breaking news even before their parents have received such news. The social media creates a rich source of information that caters for the youth in an appealing and sensational way. In addition, teens find a way to express themselves fully and anonymously in a manner that they could not have achieved in the real world. The virtual world breaks the conventional rules and hierarchical structure that teenagers are forced to submit to.

Although this may come with various demerits, such as fraud and emotional troubles, one cannot afford to ignore the relief that the social media avails to teenagers who may be in dire need to express their feelings without being judged. Although there are outstanding demerits, the benefits outweigh the disadvantages. Lewin and Staples have avidly described disadvantages such as untoward social behavior, fraud and criminology, obesity and dwindling academic performance. However, these are resultant problems when sources and devices that avail social media content are not properly regulated. They are a result of overuse rather than the proper usage of electronic media gadgets. How might Staples argument be problematic and to some extent fallacious?

Staples arguments may not necessarily hold water given that the internet and other forms of social media have successfully started off relationships. In fact, various couples have met and fallen in love via the internet and are currently happily married. The supposition that career couples have had their lives ‘taken over by e-mail and wireless tethers’ is in fact fallacious (Staples 1). People have adopted technology which avails a cheap means of communication. Rather than rely on older means of communication, which are quite cumbersome, they have chosen to adapt fast and efficient electronic devices.

In addition, not all adolescents are drawn to the cyberspace so as to commit fraud or to ‘discard (their) quotidian identities’ (Staples 2). For instance, most adolescents prefer social sites such as Facebook which demand that the user should log in using a valid name. In conclusion, social media has made great impacts on today’s youths. Not only are they spending more time in this virtual space but they are also seeking entertainment and information in areas previously untested. Therefore, they face numerous challenges in adopting technology in order to suit their own ends. Therefore, parents should take a firm stand and guide their children through these perilous grounds in order to transform these young adults into successful people in future.

Effects of Social Media on the Youth. (2017, Feb 07). Retrieved from https://studymoose.com/effects-of-social-media-on-the-youth-essay 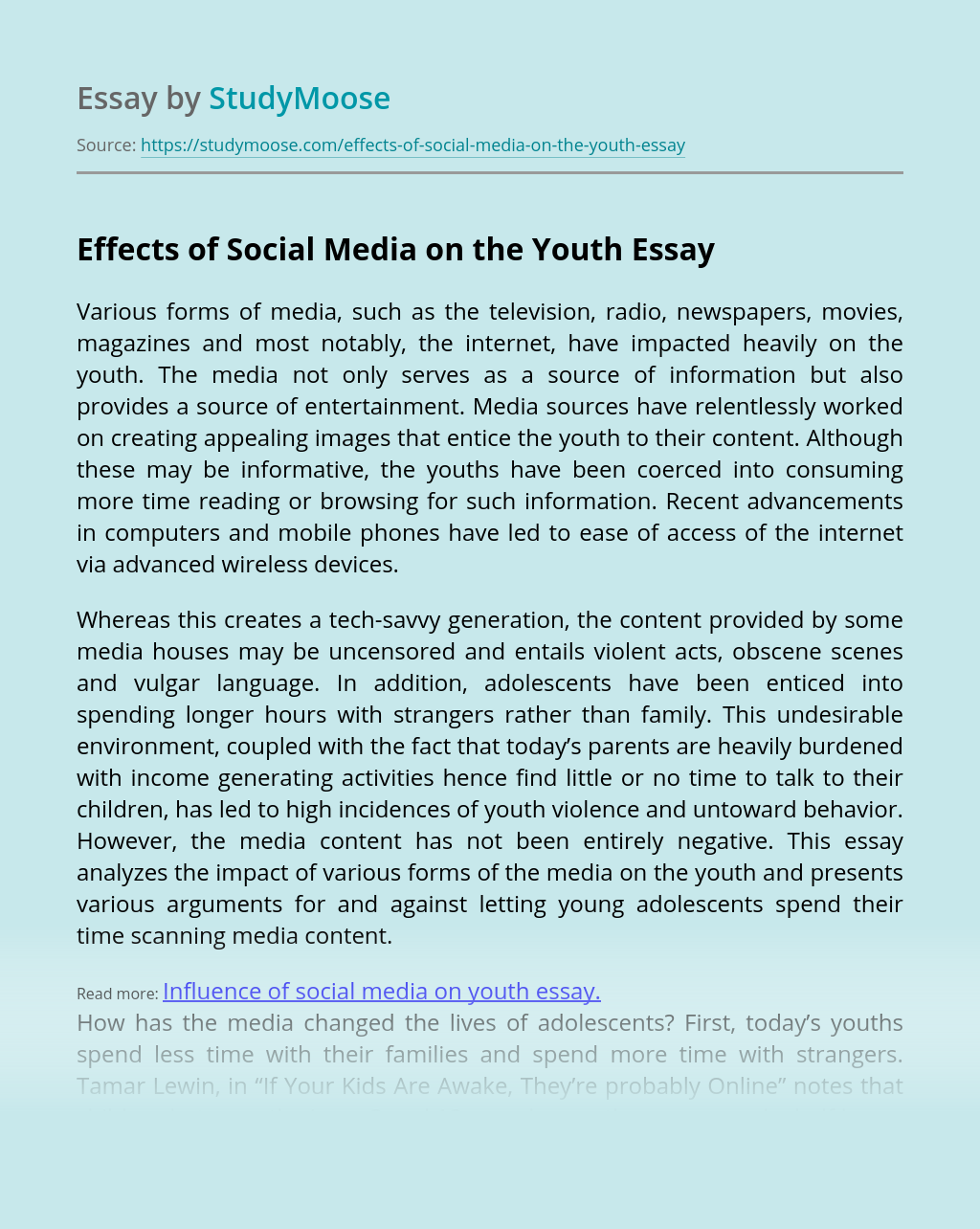 Ratio analysis is an useful method for comparing a company’s performance and position with other business. Nevertheless, such contrasts might be deceptive. A few of the limitations of ratio analysis for cross-sectional comparisons are discussed below: Accounting policies: Accounting laws allow companies to pick accounting policies and utilize discretion while preparing accounts. Such a freedom...

Advanced practice nurses subscribe to the ethical principle of beneficence because they must offer the kind of care, which benefits patients. Such a requirement calls for the application of evidence-based theoretical approaches, with Afaf’s transitions theory emerging as one of the preferred models. It is a broad theory, which identifies the fact that change defines...

During the 14th century, when the beginning of the Renaissance took place, Florence was one of the main political, economic, and artistic cities in Europe. The Black Death, the plague that reduced the population of Florence, and the difficulties Florence encountered by this time explain the heavy influence of gothic style in architecture and the...

Too Many People Are Going to College

“Too many people are going to college” by Charles Murray is a very informational article that contains a fresh look at today’s employers and what they look for in their employees. Murray defines the differences and similarities of a traditional university from current times and from past times. Overall, Murray is saying that everyone should...