Measuring the Aspects Behind Youth Crime

Young people may be attracted to violent behaviour as a way of asserting their independence of the adulthood and their rules, as a way of gaining the attention and respect of peers, as a way of compensating for limited personal competencies, or as a response to restricted opportunities for success at school or in the community. After all, in this period of youth life, many changes like stress, depressed, conflicting and violence situations can be found. Therefore, the present research work has been focused to study about the socio-economic connection of youth in relationships with the family, neighbours, peers, and others during the transitional period of life.

Don't use plagiarized sources. Get your custom essay on
“ Measuring the Aspects Behind Youth Crime ”
Get custom paper
NEW! smart matching with writer

The importance of family background for the formation and development of personality of a child concerning the involvement with youth crime. In the present chapter has tried to analyse the different factor within the family situation which motivated the individuals to committed crime. Family is one of the most important institutions of the development of youth’s behaviour & attitude.

Proficient in: Power Of Youth

It is the main platform, where a child undergoes different guidance and discipline that are maintained & organized by parents and other family members. It is recognised as the stage from where a child’s foundations are built. Due to the discordant family situation most of the youth compel endure anti-social activities. The discordant Family situation refers to tension, conflicts, and deviant and anti social behaviour and activities prevalent among the members of the family. However in the present society, it has been found that there are declining in care, love and good rearing of the child, which in fundamental nature coincides with the growing number of youths involved with crime.

Some prior research studies acknowledged that the family is a major risk factor of crime. Wells and Rankin (1988) found that boys with very strict parents reported the most violence. Boys with very permissive parents reported the second highest level of violence. Boys with parents who were neither too strict nor too careless reported the least violence. Also, boys whose parents punished them inconsistently, sometimes punishing and sometimes ignoring the same behaviour, were more likely to commit an offense against other persons than boys whose parents punished them more consistently. Parental punishment or harshness in discipline also predicted later violence. Farrington (1989) found that sons whose fathers did not engage in leisure activities with them more often exhibited violent behaviour as teenagers and adults and were more likely to be convicted for a violent offense.

A negative family characteristic such as poor parental supervision of children is often stud¬ied as a risk factor for future delinquency or crime, and children who come from such homes are believed to be at greater risk or are more likely to commit offenses than children who do not. When the revoke occurs- such as a child growing up in a loving and supportive home- researchers often refer to these variables as “protective” factors, as they promote a child’s resil¬iency or provide protective barriers against the onset of criminal involvement even in the light of adverse condition (Derzon, 2005). Family is also responsible for defective development of personality which results is low toleration of aggravation, maladjustment, antagonism, inadequate frame of reference, inadequate reality perceptions and other psychological malfunctioning. The defective development of personality resulted as a violent mood of character of an individual.

Gershoff (2002) addressed the question of whether the use of physical punishment by par¬ents has a negative impact on their children. Family also creates such unpleasant situations that finally lead to involved in criminal activities. Johnston (1955) pointed out that “children who demonstrate aggressive, homicide and other forms of violent behaviour are usually what their parents subconsciously wish”. The parents aggressive and violent behaviours influence children’s involved in violence behaviour (Burt, 1944).Lack of affection, either actual or as perceived by the child, is regarded as an important contributory factor in anti social attitude. It is because the child is dependent on its parents for its physical as well as social needs. The lack of affection may arise due to different reasons, like disharmonious relationship between the parents, a broken home, e.g. when one or both parents are missing due to death, divorce or desertion Qadri (2009).

Measuring the Aspects Behind Youth Crime. (2021, Dec 10). Retrieved from https://studymoose.com/measuring-the-aspects-behind-youth-crime-essay 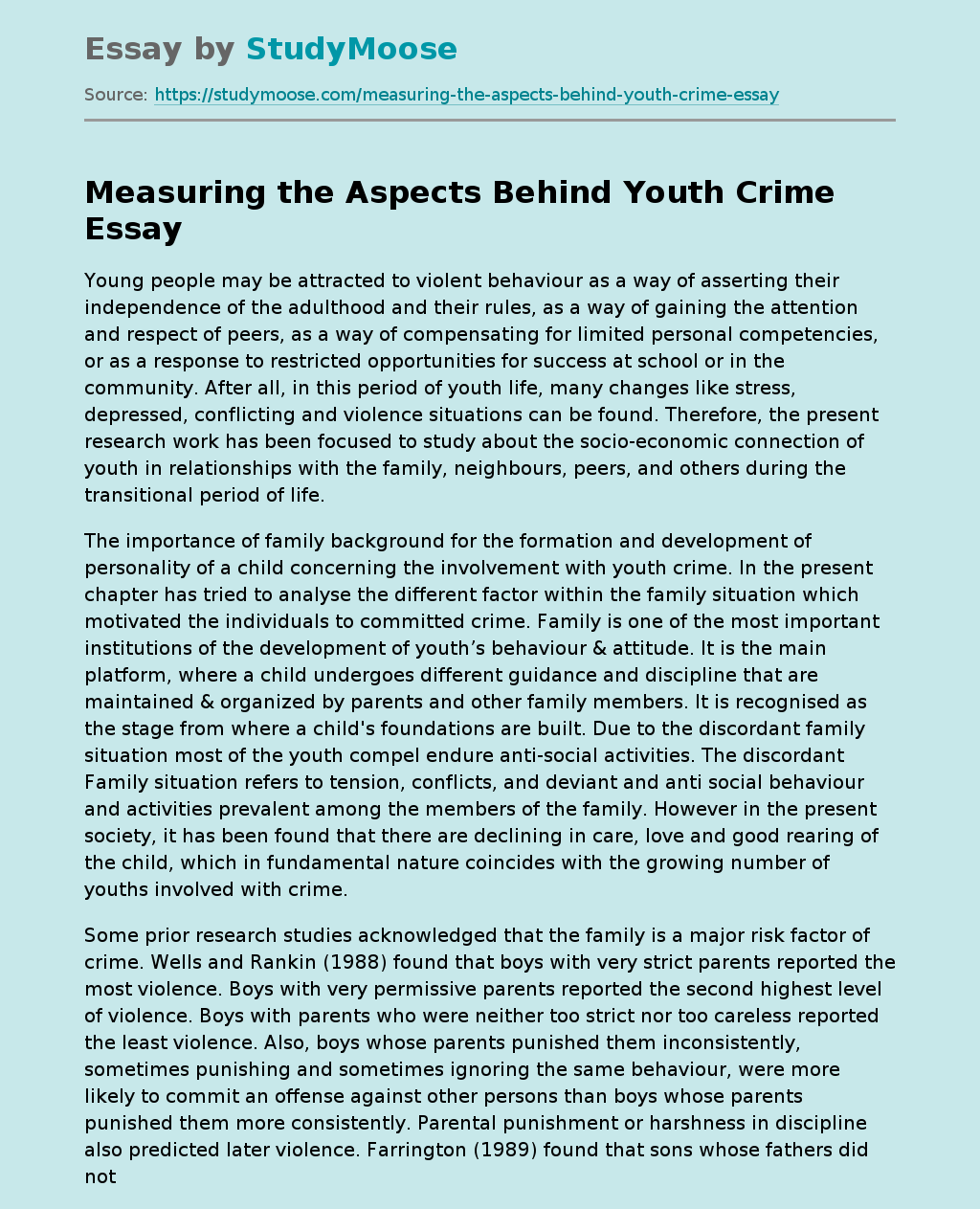