Marriage versus living together

Marriage is considered to improve well- being and the health of the world’s population. Findings from researches indicate that, in general, married couples are healthier physically, happier, experience better mental health, live longer, feel more contented and rarely suffer from physical abuse (McGowan, 2006). However, impacts of living together before legal marriage which is known as premarital cohabiting are very detrimental. Cohabiting is associated with increased aggression and conflict thus increasing the probability of separation in later marriages.

It is noted that direct negative effect is created by living in pre marital union on later marital stability whereby living together before marriage undermines the legality of formal marriages thus reducing the required marriage commitment.

Turn in your highest-quality paper
Get a qualified writer to help you with
“ Marriage versus living together ”
Get high-quality paper
NEW! AI matching with writer

This results to shifting from one partner to another by cohabitants seeking for the ‘right partner thus an average cohabitant is considered in a lifetime to have several partners. Young people nowadays consider living together then marrying later instead of marring then live together (McGowan, 2006).

It is noted that most of the people who decide to live together before marriage their communication skills with each other are very poor which most likely leads to separation.

This is as a result of failure for the partners to discuss their concerns or personal problems since they don’t feel that their partner has a right to hear about them or it’s none of their business. In marriage, your partners concerns and problems are yours too hence the relationship is strengthened through effective communication.

The reason why conflicts are difficult to resolve in people cohabiting is that, they try to use a kiss or hug instead of establishing the capacity to talk through them.

Marriages are considered to be held together through trust, openness, spiritual intimacy, true friendship, and honesty which need effort and to stand the test of time in order to develop. Extra marital affairs are more likely to increase in people who cohabit before marriage.

Premarital behaviour and attitudes concerned with sex continue even in marriage whereby the probability of partners cheating in marriage is high if they used to live together before marriage (McGowan, 2006). The reason behind it is that, cohabiting is not founded on lasting relationship but it is based on momentary romance. Romance without relationship is known as the brief most excellent encounter. However, marriage has excellent relationships built upon enjoying and knowing each ones partner not only on sexual but also on recreational, social, divine, openness and intellectual levels.

This explains why always married partners have higher levels of loyalty regarding to faithfulness in marriage. Cohabiting is considered as a private business founded on an emotional bond whereby there is no hope for the future, no public obligation and no official decree of responsibility and love. The partners stay together so long as their self driven interests are met in the relationship otherwise the obligation of the relationship is a month to month leasing contract and one can quit anytime.

On the other hand, marriage is more than a love agreement (McGowan, 2006). Marriage encompasses societal and legal responsibilities thus it’s a public event. It unites not only two people but also families and communities. That is the reason all newlyweds vow “till death do us part”. In summary, cohabiting is a marriage of convenience which can be disposed any time. Married couples have marriage of commitment which never comes to an end regardless of challenges experienced. Work cited McGowan, J. (2006). Marriage versus Living Together. USA: Oxford University Press.

Marriage versus living together. (2016, Sep 19). Retrieved from https://studymoose.com/marriage-versus-living-together-essay 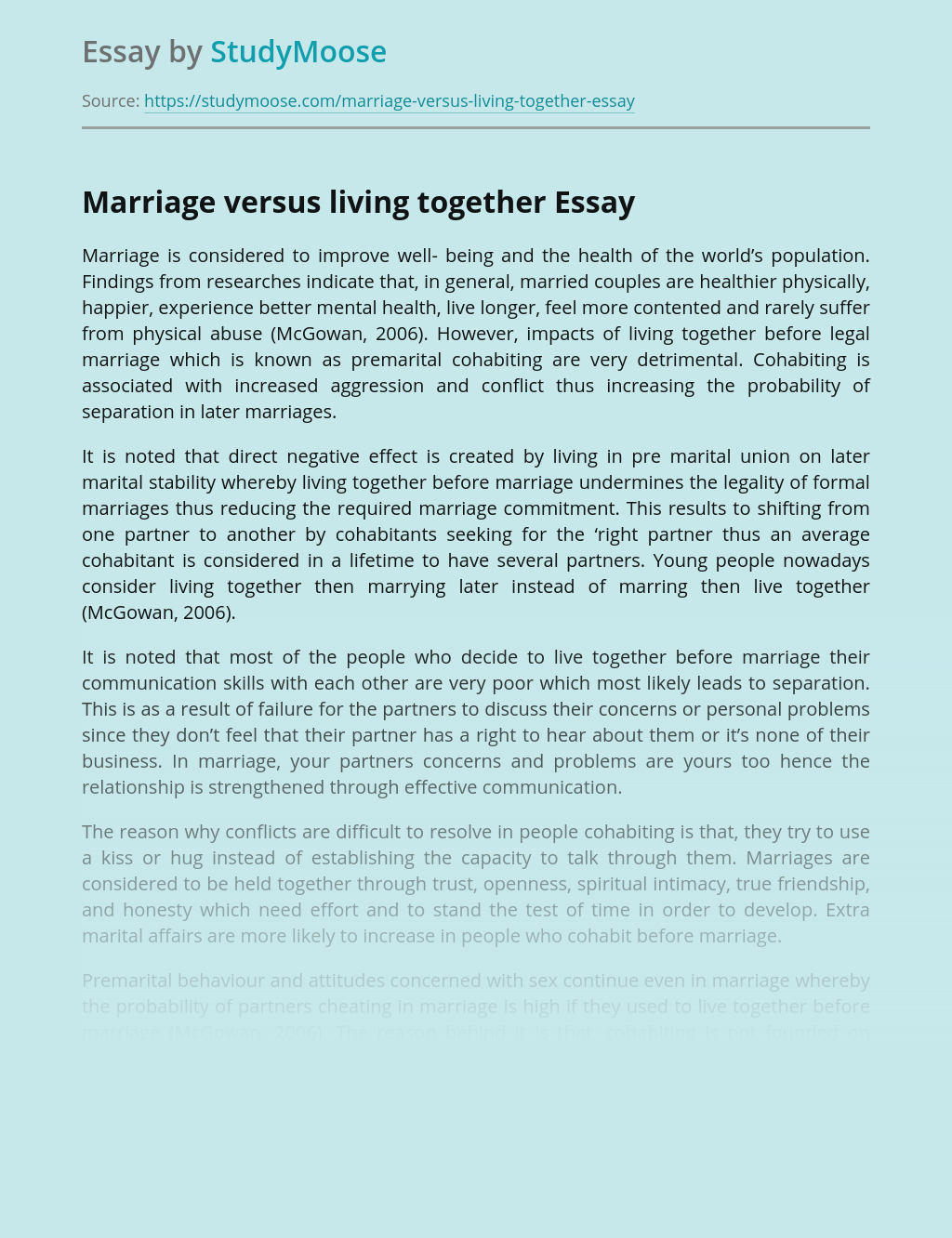 Turn in your highest-quality paper
Get a qualified writer to help you with
“ Marriage versus living together ”
Get high-quality paper
Helping students since 2015
Stay Safe, Stay Original