Marlow and Kurtz in "Heart of Darkness"

An expression of Marlow’s and Kurtz’s independence is the exploration of Africa. The two characters are alike even if the fact that the same people have recommended them for that expedition. They have a common motive for taking such a step they both want rivets: ‘ () but what I wanted was a certain quantity of rivets and rivets were what really Mr Kurtz wanted'(Conrad p.41). Marlow and Kurtz do not mean to bring civilization to the new continent; they want to benefit from it, to be consumers.

Don't use plagiarized sources. Get your custom essay on
“ Marlow and Kurtz in “Heart of Darkness” ”
Get custom paper
NEW! smart matching with writer

They feel as if they have right to do so, since they are the colonists.

It seems that the only difference between those two characters is the emotional and moral hollowness of Kurtz, which allows for his moral decay. However, at the end Marlow assists Kurtz. He leaves his moral values behind to remain loyal to a person who is remarkable. He even goes as far as to lie because of Kurtz.

At the end of the novel Kurtz is the last one that tells the truth and Marlow is the one that lies. So, the two characters have interacted and they have come closer to each other even in their degree of morality.

What makes Heart of Darkness by Joseph Conrad a fascinating novel are its intriguing characters. Marlow and Kurtz are provoking because of the idea of darkness they overspread. They are ‘doubles’, meaning that they have the same characteristics, but one of them is fiercely cruel and the other is not.

That fact implies the idea that the abyss that divides civilization from barbarity may become insignificant if one has no conscience. And the result of lack of conscience is always one: darkness.

Marlow and Kurtz in "Heart of Darkness". (2020, May 18). Retrieved from http://studymoose.com/marlow-and-kurtz-in-heart-of-darkness-essay 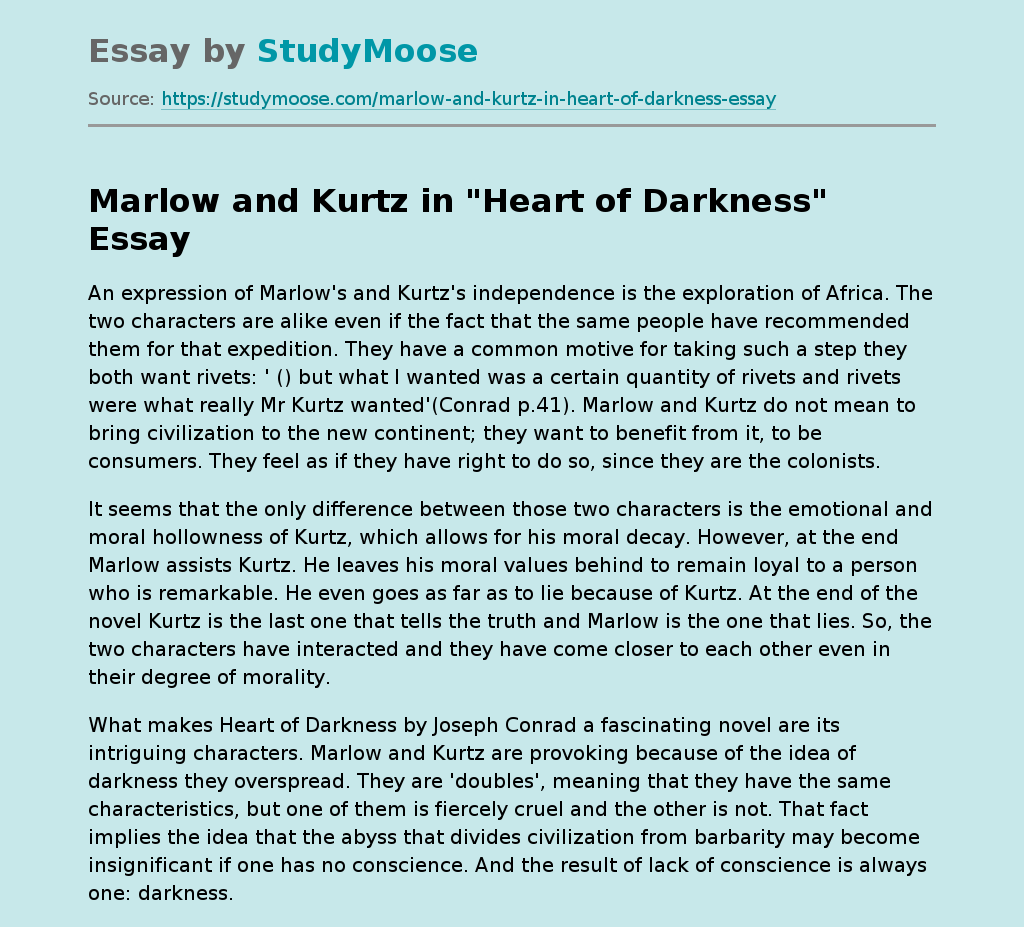